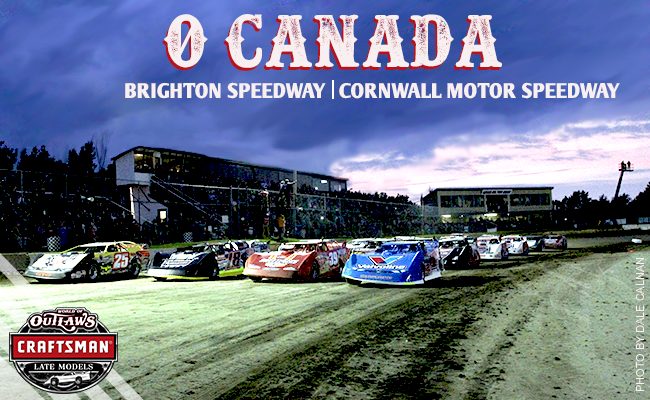 Series stops at Brighton and Cornwall June 17 and 18

CONCORD, N.C. – May 31, 2017 – The World of Outlaws Craftsman® Late Model Series will be true invaders next month when the series crosses the border for Canadian stops in Ontario at Brighton Speedway and Cornwall Motor Speedway on June 17 and 18. It will be the only time the Series stops this season in Canada.

The Outlaws have raced twice at Brighton, in 2013 and in 2015. This year’s visit to the track for the Mud Slingin’ 50 is a highlight of the track’s 50th anniversary season, said track owner/promoter Mark Rinaldi.

“There’s events we’re doing all year long to help honor the people who made Brighton Speedway what it is today,” Rinaldi said. “The Outlaws are certainly a part of it and I’m happy that everything worked out that we could put them on the schedule this year for our 50th anniversary along with all the other special events.”

The Series visits the 1/3-mile Canadian track every other season, which leaves fans excited for the Outlaws return. As the June date draws closer, the energy for the event continues to build.

“Every second year people sort of anticipate it and everybody is always waiting for us to make the announcement that they’re coming back,” Rinaldi said. “It’s definitely building momentum as we get closer to the date. You can tell the people are excited.”

A number of new stars — including most recent winners 22-year-old Devin Moran and 24-year-old Brandon Sheppard — together with veteran racers like Shane Clanton, Rick Eckert, Chris Madden and Chub Frank, will compete in the Canadian events. Josh Richards and Darrell Lanigan won the previous Outlaw visits to Brighton, but fans will be cheering equally for their favorite Outlaw drivers and local heroes.

Phil Potts and Charlie Sandercock, Brighton’s past two Late Model track champions, are eager to take on Late Model racing’s best when the Outlaws roll into town for the weekend.

Potts echoed Sandercock’s sentiment. The Outlaw visit is always among the first races circled on the calendar for the Brighton native.

“The superstars of Late Model racing are coming to our backyard, which is so cool,” Potts said. “These guys can drive and their cars are 900 horsepower. They’re turning around our little track at unreal speeds.”

The Outlaws have typically enjoyed their trips to Brighton every second season. The fast clay oval has a smooth surface with multiple grooves that allows for side by side racing.

“When I talk to guys after the race, they can’t wait to come back to Brighton again because they love the small track,” Potts said. “It’s a good surface and the fan draw is amazing.”

Following the stop at Brighton, the Outlaws will travel east to Cornwall the next night for another $10,000 to win shootout. This year’s event will be the fifth race for the Series at Cornwall, where Richards has two wins along with victories by Lanigan and Steve Francis. The track is often only host to Late Models once per season, which makes the Outlaw visit popular with some of Ontario’s most diehard race fans.

Advanced reserved tickets for the World of Outlaws Craftsman Late Model Series Mud Slingin’ 50 at Brighton Speedway on June 17 are available online by clicking here or by calling (613) 475-1102. Fans who purchase tickets prior to June 5 will receive a FREE Fan Pit Pass upgrade. Cornwall Motor Speedway tickets are general admission and available at the track on race day.