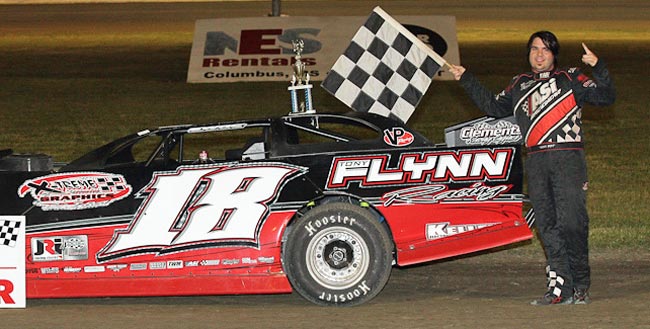 The World of Outlaws Late Model Series returns to North Alabama Speedway for the first time in five years on Fri., April 27, for a 50-lap showdown, and Hollingsworth, a 27-year-old talent from Northport, Ala., has visions of a career-boosting $10,000 triumph dancing through his head.

“It would mean a lot to win the thing,” said Hollingsworth, who will bid to become the first driver from Alabama to capture an A-Main in the history of the nationally-renowned WoO LMS. “Anytime you race the caliber of cars that are at an Outlaw show you gotta have everything go your way (to win), but I feel like we have all the right pieces in place. If we hit everything just right – and get a little bit of luck – we have a shot to be real competitive and maybe even contend for a win.”

Hollingsworth was dominant in last Friday night’s WoO LMS tuneup, setting fast time and leading the entire feature distance from the pole position. It was a rewarding evening for the young hard charger, who had his new Barry Wright-built car turning laps near the track record despite running a mandated harder spec tire.

“That was our third time to hit the track with our new car and we’re learning each time we unload,” said Hollingsworth, who has won three times at three different tracks in the last four weeks. “We went around there pretty good (on Friday), so we’ll see what happens this week. The field of cars was nothing like it’s gonna be this weekend, but our car felt pretty good so we’re excited. It’ll be interesting to see what happens when we’re able to bolt on open tires (any compound) for the Outlaw show.”

Hollingsworth, who lives two-and-a-half hours south of NAS, has raced at the track enough times over the past decade to feel confident in his ability to read its clay surface. He liked what he saw there on Friday night.

“If they get the track prep like they did (on Friday), I think it’ll make for a heckuva race,” said Hollingsworth, who owns “four or five” wins at NAS, including a $4,000 score in a special event last September. “Usually it’s a place where you can start in the back and race up through there if you have a good car. There should be a lot of side-by-side racing, but it’s a small track with long straightaways and tight corners so there’s probably gonna be a little bit of sheet metal bent up by the end of the night.”

Hollingsworth has entered 14 WoO LMS events since 2006 and qualified for seven A-Mains, with a career-best finish of 12th in the 2011 USA Nationals 100 at Cedar Lake Speedway in New Richmond, Wis. He competed in the only previous WoO LMS event at North Alabama, on March 25, 2007, and finished 21st.

CLOSE TO HOME: Mike Marlar will get his chance to go World of Outlaws racing in front of familiar faces this Saturday night (April 28) when the national tour visits Tazewell (Tenn.) Speedway.

The ‘Outlaw Sizzler 50’ presented by Rusty Wallace Cadillac-GMC-Kia of Morristown provides a rare opportunity for Marlar to run a WoO LMS event near his Winfield, Tenn., residence. A hopeful first-time series regular in 2012, Marlar figures to have plenty of support from family and friends when he chases the $10,000 top prize in Saturday’s A-Main.

Marlar, 34, remarked that “it’s fun to get to go back home” for a WoO LMS show, especially when the unique Tazewell facility is the site of the action. While Marlar has never run weekly in the track’s dirt Late Model division, he’s a big fan of the high-banked, third-mile oval that sits just two hours east of Winfield.

“It’s a fun place to race,” said Marlar, who has reached Victory Lane at Tazewell in the past. “There’s always a huge crowd there, so it’s always an event. It just don’t feel like a normal race. When you get there, it’s just a little different atmosphere than most of your normal races.”

Marlar also understands the unique challenge that comes with racing at Tazewell, which produces speeds – and, in turn, a short-track spectacle – unlike any other bullring.

“When you get your stuff right, you can just get around that place just unbelievably fast,” said Marlar, who drives Rocket cars fielded by Bryson Motorsports. “(The speed) can get you in trouble quick. If there’s an accident, it’s really hard to stay out of them. You almost got to drive into the wreck as far as you can drive to give the guys behind you room to slow down for you. There’s not much room there, so you gotta use it all wisely.”

Marlar, who has two top-five finishes and is tied for 11th in the WoO LMS points standings through seven events this season, is searching for his first-ever victory on the tour. He entered one of the previous two WoO LMS events contested at Tazewell, finishing 17th in 2010.

PROVEN WINNER: The only WoO LMS regular with victories at both North Alabama and Tazewell is Shane Clanton of Fayetteville, Ga., who has been strong on the 2012 tour (four top-five finishes) but is still seeking his first win.

Clanton, 36, was triumphant in WoO LMS competition at Tazewell, claiming the track’s inaugural series A-Main in 2010. He finished sixth in last year’s 101-lap WoO LMS event at the ‘Taz.’

While Clanton placed sixth in the only previous WoO LMS event at North Alabama in 2007 (he led laps 2-25 of the 40-lapper before fading), he was victorious in his last start there, a Southern All-Stars Series race on May 9, 2008.

ON TOP: Darrell Lanigan of Union, Ky., has been without peer so far this season on the WoO LMS – the current points leader has two wins, six top-five and seven top-10 finishes – but he’ll have to turn around his fortunes at North Alabama and Tazewell to keep his momentum going.

The 41-year-old former series champion has a pedestrian WoO LMS performance record at this weekend’s pair of tracks. He finished eighth in the 2007 event at North Alabama, while at Tazewell he placed eighth in ’10 and 14th in last year’s 101-lapper (though he was running fourth when he developed a flat tire on lap 83).

Lanigan, who scored a $2,000 weekly-show victory at his hometown’s Florence Speedway last Saturday night, enters the weekend ranked as the nation’s number one dirt Late Model driver in the DirtonDirt.com Top 25 poll.

ROOKIE TO WATCH: No WoO LMS follower has more experience at North Alabama than current Rookie of the Year points leader Bub McCool of Vicksburg, Miss., who has one win (2008 Mississippi State Championship Challenge Series event), five top-five and nine top-10 finishes in 15 starts since 2007. The only race he did not qualify for over that span was the WoO LMS program.

McCool will be on an even experience level with his Rookie of the Year rivals at Tazewell, a track he’s visited just once (finished 15th in a 2011 Lucas Oil Late Model Series event). Rookie contenders Brandon Sheppard of New Berlin, Ill., Kent Robinson of Bloomington, Ind., Jack Sullivan of Greenbrier, Ark., and Greg Johnson of Bedford, Ind., have little to no experience at both North Alabama and Tazewell.

Billy Moyer Jr. of Batesville, Ark., who began the year as one of eight WoO LMS Rookie of the Year hopefuls, announced on Monday that he has ended his chase of the first-year driver honor. He retains his rookie eligibility, however, and hopes to make another attempt at running the series in the future after gaining more experience.

HOW THEY’VE FARED: Past WoO LMS results at North Alabama and Tazewell for other WoO LMS travelers:

* Rick Eckert of York, Pa. The defending WoO LMS titlist placed eighth at NAS and sixth (’10) and fourth (’11) at Tazewell.

* Vic Coffey of Caledonia, N.Y. The 2008 Rookie of the Year has never visited North Alabama and was 15th in last year’s 101-lapper at Tazewell, his only appearance at the Volunteer State track.

* Clint Smith of Senoia, Ga. The veteran placed seventh at NAS and has finishes of ninth (’10) and eighth (’11) at Tazewell.

* Pat Doar of New Richmond, Wis. The 2011 Rookie of the Year has raced at Tazewell once, finishing 21st in last year’s 101-lapper.

* Tim Fuller of Watertown, N.Y. He failed to qualify at North Alabama during his Rookie of the Year-winning campaign, and he’s struggled to finishes of 15th (’10) and 12th (’11) at Tazewell. While he announced last month that he will not enter his cash-strapped equipment in this weekend’s events, reports indicate that he might have a ride that will provide him a last-minute reprieve from leaving the WoO LMS trail.

BATTLE IN ALABAMA: Drivers expected to challenge the WoO LMS regulars at North Alabama include Ray Cook of Brasstown, N.C., who finished second in the tour’s season opener on Feb. 11 at Georgia’s Screven Motor Speedway; brothers Brian and Rick Rickman, both of Columbus, Miss.; Chad Winkles of Falkville, Ala., who finished second in last Friday night’s feature at NAS; Eric Cooley of Fulton, Miss.; Brian Reese of Sharpsburg, Ga.; Josh Putnam of Florence, Ala.; and Tony Knowles of Tyrone, Ga.

NORTH ALABAMA SPEEDWAY INFO: The WoO LMS event on Fri., April 27, is scheduled to kick off with hot laps at 7:30 p.m. Also on the program will be the track’s Late Model Stock, Mini-Stock and Modified Street divisions.

More information on North Alabama Speedway is available by logging on to www.northalabamaspeedway.com or calling the track office at 256-381-5051.

TAZEWELL SPEEDWAY INFO: The Sat., April 28, card will also include racing for the Modified Streets, Classic Cars and Four-Cylinders.

Tickets for the WoO LMS event are $26, with children 10-and-under admitted free of charge. Pit passes are $38.

Pit gates open will open at 2 p.m. and grandstand gates will be unlocked at 4 p.m. On-track action is scheduled to begin at 7:30 p.m.

Tazewell Speedway is located just two miles northwest of Tazewell, Tenn. Going north on US 25-E, turn right and then left onto Bacchus Rd., travel 1.8 miles north and .8 miles west and the racetrack is located on the left.

Additional information can be obtained by logging on to www.TazewellSpeedway.net or calling 865-626-2222.