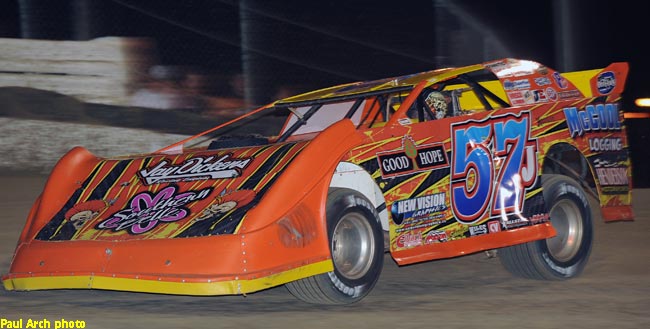 As a Rookie of the Year candidate on the national tour, McCool is unfamiliar with a majority of the tracks on the circuit’s 2012 schedule. But that’s not the case with North Alabama, a one-third-mile oval at which the Vicksburg, Miss., driver possesses more experience than any of his WoO LMS rivals.

McCool, 34, hasn’t raced at North Alabama since September 2009, but over a three-year span beginning with the track’s one and only previous WoO LMS program, on March 25, 2007, he entered 15 special events. His NAS performance record includes a victory in a 2008 Mississippi State Championship Challenge Series feature, five top-five and nine top-10 finishes – stats that send him into the 50-lap, $10,000-to-win A-Main on April 27 with a good feeling about his prospects.

“We’ve run pretty good there in the past so hopefully we can continue that in the Outlaw show,” said McCool, whose home is about five-and-a-half hours southwest of North Alabama. “We’re not gonna run a track we know any better this year, so we better be on our game and take advantage of our knowledge of the place.

“Of course, racing with this Outlaw bunch, I don’t know if you can ever have a real advantage. But if you know the racetrack a little bit, I guess it helps.”

McCool forecasts an exciting evening of action at the Jeff Greer-promoted track, which many observers say produces some of the best racing in the Southeast.

“It’s one of those little paper-clip, tight bullrings,” said McCool, who failed to qualify for the 2007 WoO LMS event at North Alabama that was won by Earl Pearson Jr. of Jacksonville, Fla. “Come feature time it cleans up and you can race all over it. You can run two- or three-wide.

“I think it’ll be a good show. I’m looking forward to it.”

McCool will enter the North Alabama event, which leads off a WoO LMS doubleheader that also includes an April 28 date at Tazewell (Tenn.) Speedway, as the tour’s highest-ranked rookie but in desperate need of a slump-busting run. He sits a respectable ninth in the points standings through seven A-Mains, but he plummeted from sixth after a 28th-place finish in the last event, the Illini 100 on March 31 at Farmer City (Ill.) Raceway.

The affable McCool began his first season as a WoO LMS regular on a strong note, matching his career-best tour finish of 11th in the ‘Winter Freeze’ opener on Feb. 11 at Screven Motor Speedway in Sylvania, Ga., and then bettering that by a country mile with a solid third-place run on Feb. 17 at Bubba Raceway Park in Ocala, Fla. He also finished ninth on Feb. 18 at BRP and eighth on Feb. 23 at Volusia Speedway Park in Barberville, Fla.

But McCool’s momentum was dulled in the season-opening swing’s finale on Feb. 25 at Volusia, where his family’s primary Victory Circle machine was sidelined by engine problems discovered during afternoon maintenance and then his backup car was slowed by more terminal maladies under the hood. He was able to start the A-Main with a points provisional but could only baby the mount to a 22nd-place finish.

“We were tickled to death with how we started, but we’ve run into some problems the last couple shows,” said McCool, who entered the 2012 season having entered 16 WoO LMS events since 2007. “We have to get back on track.”

McCool, who won a MSCCS event on March 24 at Whynot Motorsports Park in Meridian, Miss., between his last two WoO LMS starts, realizes that there are no shortcuts to success with the World of Outlaws. But he’s confident that he has the equipment, manpower, ability and desire to capture the Rookie of the Year honor over a first-year driver group that currently includes Brandon Sheppard of New Berlin, Ill., Kent Robinson of Bloomington, Ind., Jack Sullivan of Greenbrier, Ark., Billy Moyer Jr. of Batesville, Ark., and Greg Johnson of Bedford, Ind.

“Winning this rookie deal is our goal,” said McCool, who lists racing as his occupation but also helps out when needed at his family’s McCool Logging business. “If we could do that along with finishing top-10 in points and maybe winning a show or two, we’d be satisfied. We know how hard this is.”

McCool’s assault on the WoO LMS this season continues his steady climb onto the national dirt Late Model stage. While he debuted in the division as a 13-year-old, won his first feature the week before his 15th birthday and traveled the old Hav-A-Tampa/UDTRA series as a teenager in 1996, he’s actually a relative newcomer to the class. He spent nearly seven years out of the cockpit after a serious January 1997 highway accident near his home left him with a badly broken left hip among other injuries, and it wasn’t until 2006 that he began racing extensively again.

“We’ve gotten bigger each year since getting back into it,” McCool said of his racing schedule since ’06. “I’ve always wanted to try the World of Outlaws one year and felt like this was the best time to take a shot at it.

“To make yourself better, you gotta get out here and run with these national guys. That’s what we’re trying to do this year.”

The WoO LMS event on Fri., April 27, at North Alabama Speedway is scheduled to kick off with hot laps at 7:30 p.m. Also on the program will be the track’s Late Model Stock and Modified Street divisions.

More information on North Alabama Speedway is available by logging on to www.northalabamaspeedway.com or calling the track office at 256-381-5051.