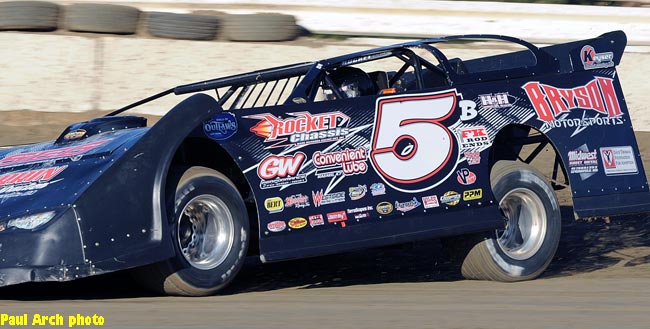 WHEEL, TN – March 19, 2013 – Mike Marlar knows all too well what it feels like to lose a World of Outlaws Late Model Series A-Main, so it’s no surprise that he harbors a burning desire to experience the ecstasy of a Victory Lane appearance on the national tour.

There could be no better time for the veteran standout from Winfield, Tenn., to finally realize his goal of a World of Outlaws triumph than this Sunday evening (March 24) when the renowned full-fender circuit visits Marlar’s home state for a 50-lap, $10,000-to-win spectacular at Duck River Raceway Park.

Indeed, it’s checkered-flag-or-bust on the WoO LMS this weekend for Marlar, a 35-year-old talent who has come tantalizingly close to victory several times on the series over the past two years while driving for Bryson Motorsports.

“Actually, this weekend we’re going out of our way to go Outlaw racing because I just really want to win an Outlaw race,” said Marlar, who plans to precede his assault on Duck River by entering WoO LMS events on Friday night (March 22) at I-30 Speedway in Little Rock, Ark., and Saturday night (March 23) at Whynot Motorsports Park in Meridian, Miss. “After coming up short (of a World of Outlaws A-Main score) a few times, after having a few near-misses, we’re really hungry to win one.

“If I can’t get one the first two nights (of this weekend’s WoO LMS tripleheader), it would really be neat to get my first Outlaw win in my home state (on Sunday). That would just be awesome, almost like it was meant to be.”

Marlar has finished as high as second in a WoO LMS A-Main on two occasions, most recently on Feb. 16 at Bubba Raceway Park in Ocala, Fla. He appeared headed to his first-ever series win that evening until slipping slightly off the preferred bottom groove on the 48th of 50 laps, allowing defending WoO LMS champion Darrell Lanigan of Union, Ky., to grab the lead heading to the white flag and march on to a dramatic victory.

“That one was definitely disappointing,” said Marlar, whose other runner-up WoO LMS finish came in decidedly less heartbreaking fashion on June 28, 2012, in a Firecracker 100 preliminary A-Main at Lernerville Speedway in Sarver, Pa. “I wouldn’t say we gave it away – Darrell took it – but we were in position to capitalize. I just look at it as being a product of those early-season blues – not really being in the rhythm good yet and making those little mistakes that you don’t really make when you get into the racing (season) more.”

Marlar also flirted with World of Outlaws glory in the 2012 Bubba Army Late Model Winter Nationals finale at BRP, leading more than half the 60-lap race before ceding command and finally hitting the turn-three wall on the final circuit when he ran out of racing room bidding to overtake 2011 WoO LMS champion Rick Eckert of York, Pa., for the top spot.

“I definitely know how it feels to lose an Outlaw race,” smiled Marlar, who enters this weekend’s action having started 41 WoO LMS A-Mains in his career, nearly half (20) coming in the past two years. “Maybe that will make winning one feel even sweeter.”

Marlar would get a veritable sugar high if his breakthrough WoO LMS triumph would come on Sunday at Duck River, a quarter-mile, high-banked oval that is set to host the tour for the first time. For a driver with some big-money race wins on his resume (Hillbilly 100, Magnolia State 100), capturing a World of Outlaws event over a field of competitors that figures to rank as one of the best to ever grace Duck River’s pit area would certainly be a career milestone.

Marlar will head a solid group of Tennessee drivers that includes Vic Hill of Morristown, Billy Ogle Jr. of Knoxville and Todd Morrow of Chattanooga.

“I think it’s gonna be a good show,” said Marlar. “From everything I’ve heard, the new owners (Bob and Cathy Harris) really seem like they’re doing a good job with the place. I haven’t gotten to race there since Mr. Harris took it over (during the 2011 season), but everyone I’ve talked to says they’ve really been making improvements to the place.”

Marlar has only competed at Duck River a handful of times during his career. His last visit was for a season-ending two-day show in November 2006 (he finished fifth in the preliminary feature and third in the 75-lap finale), but the track left a strong impression on him.

“From my limited experience there, it’s probably one of the best tracks in Tennessee,” said Marlar, who lives about four hours northeast of Duck River. “Actually, you don’t feel like you’re in Tennessee when you’re there. It’s more of a Midwest-looking racetrack. It doesn’t have that red clay like a lot of your Tennessee tracks, and you can race over it. It’s a good little track.”

General Admission for the event, which also includes racing for the two-barrel Late Models and Mod Street Bombers, is $25. Children ages 6-12 are $10 and kids 5-and-under will be admitted free of charge. Pit passes will cost $35.