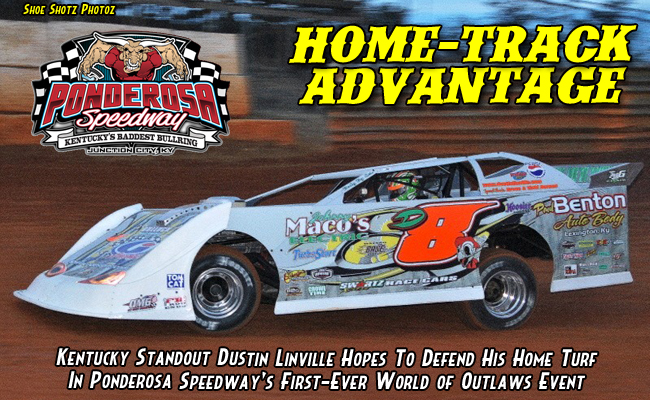 JUNCTION CITY, Ky. – May 5, 2015 – Over the past four years, Dustin Linville has padded his resume with weekly race wins and special event triumphs at Ponderosa Speedway. On Friday night, the Bryantsville, Ky., racer will attempt to add a national touring victory to his Ponderosa tally when the World of Outlaws Late Model Series makes its first-ever visit to the Central Kentucky track.

Linville will be among a strong contingent of local and regional drivers aiming to overcome the stars of the WoO LMS as Ponderosa hosts its first-ever national touring race. Friday’s $10,000-to-win program kicks off a doubleheader weekend for the WoO LMS, which moves to Smoky Mountain Speedway in Maryville, Tenn., on Saturday.

“I’m pretty pumped up,” said Linville, who launched his Late Model career at Ponderosa in 2008 and in the same season won the track’s Rookie of the Year Award and the first of his two Late Model track championships. “We’ve won some big races there, but then there’s never been a race this big. Hopefully we have a good night and have some things go our way.”

Linville, who will celebrate his 24th birthday one day before Friday’s WoO LMS visit, has been among the winningest drivers at Ponderosa over the past four years with victories in the track’s Hugh “Junebug” Rowland Memorial, Red Clay Bash and Fall Classic.

Linville has also had success away from Ponderosa on his way to emerging as one of Kentucky’s most promising up-and-coming regional racers. His notable showings include a solid performance in last year’s WoO LMS event at 201 Speedway in Sitka, Ky., in which Linville posted the fastest time in his qualifying group, won his heat race and finished 14th in his first ever WoO LMS A-Main start.

But even with his success away from his home track, Linville knows he’s best at Ponderosa, making Friday’s race perhaps the best opportunity he has ever had to accomplish his goal of winning a national touring event.

“It’s always been my goal to win a national touring race, and this is probably the best chance we’ve ever had to do it,” said Linville, who drives a family-owned No. D8 Swartz Xtreme Race Car. “I know those Outlaws guys have their stuff dialed in and they’re tough everywhere they go, but I feel like we’re pretty tough too. If we run like we know how and get just a few things to go our way, I think we stand a pretty good chance.”

Linville hopes that his experience at Ponderosa will give him an advantage over the WoO LMS regulars, most of whom have little to no experience at the track. As Linville points out, the track’s unique D-shape often proves tricky for first-time visitors, and the local and regional competitors there are more than formidable.

“It’s one of those places that you can’t ever count out the local guys and the regional guys that stop in there. There’s a lot of good drivers that race there that are capable of winning a big race like this.”

Linville would like to make sure that if a local driver does upset the WoO LMS regulars on Friday, it’s him doing it. He’s long dreamed of earning a national event victory and claiming it in front of his home-track fans would make the accomplishment even sweeter.

“Winning an Outlaws race would be pretty awesome, especially to do it at your home track in front of all your fans,” Linville said. “Being my home track with a series like the World of Outlaws coming into town, it’s a pretty big deal. To get to race against that caliber of competition in front of your family and fans, it’s pretty cool. Hopefully we can go out there and have a pretty good showing.”

The Jerry Denson-promoted Ponderosa Speedway is a 3/8-mile, D-shaped clay track nicknamed “Kentucky’s Baddest Bullring.” Victor Lee of Danville, Ky., holds the track record with a lap time of 12.744 seconds. That record has stood since April 5, 2008.

While Ponderosa has never hosted a WoO LMS event, a few of the series regulars have had success at the track, including Eric Wells of Hazard, Ky., who lists Ponderosa among his favorite tracks. The 2013 WoO LMS Rookie of the Year is a past winner of both the John Bradshaw Memorial (2011) and Fall Classic (2010).

Three-time and defending WoO LMS champion Darrell Lanigan of Union, Ky., also has some history at Ponderosa with two victories in both the Fall Classic (1994 and ’99) and the Pete Abell Memorial (1995 and ’97).

Friday’s event at Ponderosa features a complete WoO LMS program of time trials, heat races, Last-Chance Showdowns and a 50-lap main event paying $10,000 to the winner. Both the pit gates and general admission gates open at 4 p.m. EDT. The drivers meeting is scheduled for 7 with hot laps set for 7:15. General admission ticket prices are set at $30 with children ages 12 and under free. Pit pass are $45.

Listen to live audio from Ponderosa’s WoO LMS event for free on www.DIRTVision.com. Results throughout the evening will be posted to the Official World of Outlaws Late Model Series website at www.WoOLMS.com.

Further updates and photos from WoO LMS events are posted on the Official WoO LMS social media pages on Twitter atwww.Twitter.com/WoOLateModels and Facebook at www.Facebook.com/WorldofOutlawsLateModelSeries. Check out the latest videos on YouTube at http://www.youtube.com/WorldofOutlaws.