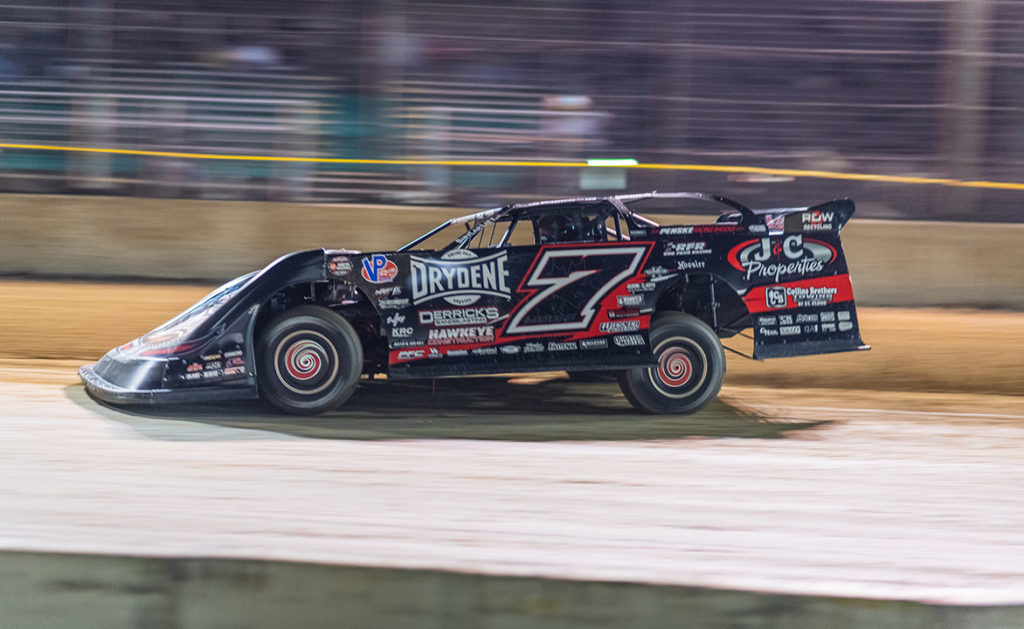 After visiting the Turn 3 wall at Volusia Speedway Park for two consecutive days, Ricky Weiss got advice that changed his outlook on the season-opening weekend.

Charles “Ronny” Crooks, a shock expert who has worked with the likes of Dale Earnhardt, went over to the Canadian and told him, “You know, Dale Earnhardt stuffed it in the wall and tore up a race car and told the guys, ‘You know, now I know how far I can go.’”

Despite their struggles and suffering the loss of a new self-built Sniper Chassis, Weiss and his team still managed to leave Sunshine Nationals with their heads high and an abundance of confidence.

During the opening night of the 2021 World of Outlaws Morton Buildings Late Model season, Weiss smacked the Turn 3 wall in Qualifying and later had to use a provisional to start the Feature after failing to transfer out of the Last Chance Showdown. However, in the Feature, he made the impressive charge from 23rd to seventh in his repaired Drydene #7 machine – earning the Hard Charger Award.

The next night, like déjà vu, Weiss found himself stopped at the Turn 3 wall. This time, in practice, and this time putting the final nail in the coffin for his new Sniper Chassis. Then, in a blessing, or curse, the black cloud over his head spread over the track and rained out Friday night’s event. Even with the free time from the rainout, Weiss had to roll out his 2020 Team Zero Chassis from last year and run it Saturday night. On that final night, Weiss had another impressive charge from 15th to fourth – earning another Hard Charger Award.

But what turned his early frown to a grin the most by the end of the weekend was beating his 2020 championship rival, three-time defending champion Brandon Sheppard, both nights.

“Our week has just been a bunch of highs and lows, but to come out of here and beat that blue #1 (Rocket) car, two for two, I’m just excited for the guys,” Weiss said. “Excited with what we have rolling. If you look at the two points nights, they’re pretty good. Yeah, we tore up a race car a little bit, but we got some time now to fix it, build another one and come in strong.”

The 2019 Rookie of the Year transitioned from running Team Zero Chassis cars to building his own Sniper Chassis over the offseason. He only had the one Sniper on hand during the Sunshine Nationals, but he and his team are taking the near-month break between Sunshine Nationals and the 50th DIRTcar Nationals, Feb. 10-13, to build more. A few for themselves and a few for others.

While he only got one full night out of his new car, he said there was still plenty he learned.

“Stay off the wall,” Weiss said with a chuckle.

He was pleased with what he saw from his new car and the potential it holds for the remainder of his third full-time season. He’s already looking to make room for a couple of Volusia gator trophies, and possibly even a Big Gator Championship trophy – which would be his first in both cases. His current career-best finish at the half-mile track is second, in 2020.

“We’ve got some good equipment,” Weiss said. “I think we got a shot to go for that gator here, grab a couple wins. I just can’t thank everyone on my car enough. Hopefully, we can make them proud.”

Like Earnhardt, Weiss now knows how far he can go.

For tickets to the 50th DIRTcar Nationals at Volusia Speedway Park, CLICK HERE.