Taking on a new journey can lead to many different emotions, especially in racing. For World of Outlaws Morton Buildings Late Models driver Ricky Weiss, his third full season is a venture he’s never experienced before.

The Headingly, MB, Canada driver is pushing for his first championship behind the wheel of his own Sniper chassis.

He’s yet to reach Victory Lane in one of his cars, but The Manitoba Missile is starting to put together consistent runs. He has eight top-10 finishes in 2021, so far. Only Brandon Sheppard (12) and Chris Madden (11) have more.

Despite those consistent finishes, there’s also been nights he’s struggled.

Weiss knows it’s part of the ups and downs drivers deal with running a national tour.

“You’re going to have that roller coaster effect,” Weiss said. “The car’s been good, we just got some stuff as a team to work on, and I think we’ve got the speed.”

Speed is something that may come in handy as the Series moves to Port Royal Speedway. Weiss has had success at the 1/2-mile oval, finishing second to Mason Ziegler in 2019. He also led 17 laps in that race.

“It’s another big, fast track that becomes racy in the Feature,” Weiss said. “I think we’ll have a good car in the Feature, we just need to Qualify better and run our Heat Races better.”

Weiss enters Port Royal fifth in the points standing—156 points behind Sheppard. Even though he’s not too far behind, it’s not something he’s worrying about right now.

“I don’t really want to look at points until November, that’s always been my goal,” Weiss said. “There’s no doubt we’ve been struggling here and there, but you never know when that roller coaster effect could come around. I think the further we go we’re going to get better and better.”

Weiss’s success in his Sniper chassis isn’t his only focus in 2021. He’s been going to different racetracks helping customers move in the right direction. 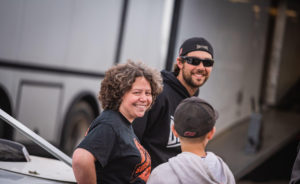 The optimism Weiss is carrying through this journey, could be the key to unlocking more success on the path toward his first championship.

“The Manitoba Missile” and the rest of The Most Powerful Late Models on The Planet head to Port Royal Speedway May 21-22, for the Huey Wilcoxon and Billy Vacek Memorials.