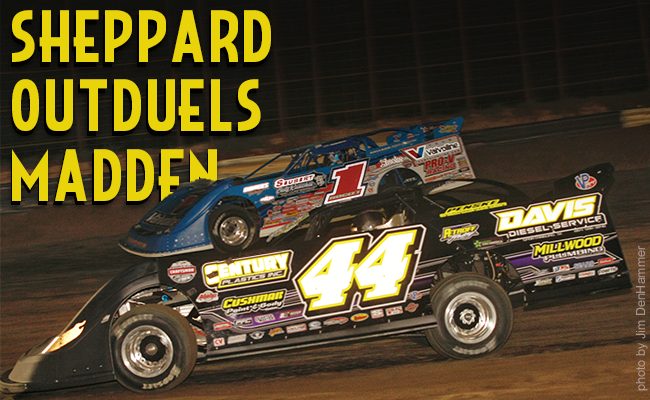 BROWNSTOWN, Ill.— July 26, 2017— The statistical report from the World of Outlaws Craftsman® Late Model Series shootout at Fayette County Speedway shows Brandon Sheppard leading every lap of the 40-lap feature.  The feature event was anything but in the bag for the dominate Late Model driver as Sheppard had to fend off multiple charges from Shane Clanton and Chris Madden before claiming his 10th Outlaw win of the 2017 season.

Being in Victory Lane at Fayette County Speedway was a familiar flashback for Sheppard, who had visited the quarter-mile track at the beginning of July with the DIRTcar Summer Nationals where he claimed his fifth win in a row with the tour.

“I’ve always liked this track a lot and we’ve always found a lot of success here. I guess it just fits me well,” said Sheppard. “I couldn’t do this deal without all of my guys— Dan, Austin, Joel, Mark, little Brian, everyone at Keyser Manufacturing, Integra Shocks and Springs, and Rocket Chassis. You know I got to thank [Rocket] for giving me this opportunity and putting me in this thing and going out on a limb for me. It’s really worked out in my favor, for sure. I’ve really came a long way. I have to thank Mark and Steve for that. I also have to thank all of my sponsors… and all of the fans for coming out tonight too.”

Sheppard started the feature on the outside of pole-sitter Clanton and found his way to the lead on the first lap. In 20-laps time, Sheppard had created nearly three-seconds between him and Clanton who was still holding on to second from a hard charging Madden. By lap-25 Madden found his way past Clanton and was headed for Sheppard.

As Madden was slowly trying to reel in race long leader Sheppard, the first caution fell on lap 28 for Bobby Pierce who suffered from a flat tire. Subsequently, Sheppard’s three-second lead was lost. Sheppard and Madden remained in their respective positions after the restart but Rick Eckert was able to capitalize on Pierce’s misfortune. Eckert bypassed Clanton for the final podium position.

For five laps, Eckert and Madden battled side-by-side for second. Eckert controlled the bottom of the racetrack and Madden held down the middle lane all the while Sheppard continued to pull away.

Unfortunately for Sheppard, his unwavering effort to create distance betweem him and the rest of the pack would soon again be thrown away with second and final caution of the evening on lap 36 for Devin Moran who got turned around after battling three-wide out of a corner. Moran was running fifth at the time.

The restart allowed Madden to make his much-anticipated move on Sheppard. For the remaining four laps of the feature the pair put on a show for the crowd as Madden nearly passed the race-long leader on several occasions. The most wrenching moment was on the last lap of the feature. As the pair was coming into the final turn of the race, Sheppard got too high and into the wall of turn three allowing Madden to command the lead. The Rocket1 driver quickly recovered as he shot out of cannon coming out of turn four passing Madden just before the finish line.

“I love racing and I love racing like that side-by-side,” said Madden. “Me and Brandon always have a good time racing each other and we put on a good show for the fans. That’s the main thing. We work too hard not to enjoy this. Tearing people’s stuff up and the things like that that has been going on, you know, is just unnecessary. You can race like we just raced and have a good time. We look forward to going to the next one.”

Eckert held off a podium-hungry Clanton to finish third.

“That racetrack was awesome,” said Eckert. “This was my first time ever here. The track crew did an awesome job. Man, there were lanes everywhere. Whenever someone was in front of you, you just went to a different one so hats off. That’s pretty cool.”

Although Pierce finished among the top-10, he had a rough turn of events after claiming his first ever quick-time with the Series earlier in the day. In his heat race he was running second behind Shannon Babb before suffering from a flat tire. Then on the first lap of the Last Chance Showdown, Pierce lost his driveshaft on the front stretch. Due to a provisional from the Fayette County Speedway, Pierce was entered into the 40-lap feature.