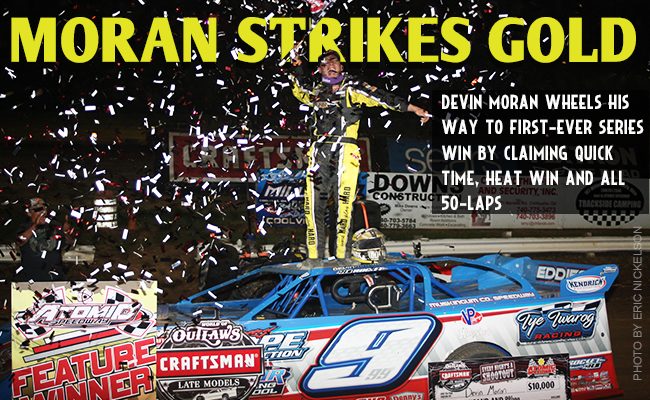 Perfect night for Moran and crew who land quick time, heat win and all 50-laps

CHILLICOTHE, Ohio— May 26, 2017— Devin Moran struck gold at Atomic Speedway during the World of Outlaws Craftsman® Late Model Series first appearance in 2017 in his home state of Ohio. Moran landed his first quick time of the season during qualifying, won his heat race and led all 50-laps of the Craftsman Club Feature to wheel his way to his first career Series win.

“When I crossed the checker flag I was yelling in my helmet,” said Moran. “Everything fell in our favor tonight. We had the car right and that’s what it starts with. Then we got quick time, won our heat and drew a good pill. It’s been a picture-perfect night here. It’s awesome to get our first win in Ohio on a night like this.”

While pulling his Tye Twarog Racing/DMR machine down the front stretch on his way to park it in Victory Lane, fans rushed to the fence waving and yelling for their newly-earned home state hero. After letting out a battle cry under a shower of confetti, Moran jumped from the roof of his car and headed straight towards his dad, Donnie, for a high-five and a hug.

“This is awesome. This is what we have worked towards for a long time and he’s finally come to his age here a little bit and got up on the wheel and got the job done tonight,” said Donnie Moran of Devin’s win.

Moran’s redraw placed him on the outside of pole sitter, Frank Heckenast Jr. On the first lap Moran took the lead before creating an impressive 1.426-second gap between him and the rest of the field in only two laps time. With the help of lap traffic, Heckenast began to reel in the Rookie of the Year Contender but unfortunately due to mechanical issues he was forced to retire from the feature on lap 25.

The pivot point of the race for eventual second-place finisher, Steve Casebolt, was lap 30 when a caution fell for Morgan Bagley as he slowed on the track. Under the same caution, Brian Shirley called it an early night and Shane Clanton headed to the pits with a right rear flat. At the time of the caution, Shirley was running seventh and Clanton was running fourth. With Clanton out of the picture, Casebolt moved to fifth for the restart of which he took big-time advantage of. Casebolt jumped up the chain on the restart moving from fifth to second in the span of just one lap.

Casebolt was sporting a brand-new ride for the Outlaw race at Atomic Speedway thanks to Jim Beeman and Tader Masters, but you would never know because he was able to finish second from a thirteenth start.

“I think I got the call on Tuesday, and we put this thing together in a hurry,” said Casebolt. “Working with Tader Masters has always been a dream of mine. I know how good he is with racecars and I’ve always wanted to learn from him. I think tonight showed that he had no doubt in me. I have to thank Jim Beeman for putting this deal together. Without him there’s no way Tater and I would have gotten the chance to work together.”

Series powerhouse and current points leader, Brandon Sheppard, rounded out the podium for the 50-lap $10,000-to-win event at Atomic Speedway.

The next stop for the Series is on May 27 at Wayne County Speedway. The event will be the second and final show in Ohio for the World of Outlaws Craftsman Late Model Series in 2017.

Rick Eckert and Chris Madden passed an impressive amount of cars during the feature as both drivers were able to gain at least 10 positions from the start. Eckert started fifteenth and finished fourth and Madden started sixteenth and finished sixth.

Chub Frank tied for his best finish of the 2017 season (fifth) at the home of his last Series win in 2009 at K-C Raceway; now Atomic Speedway.