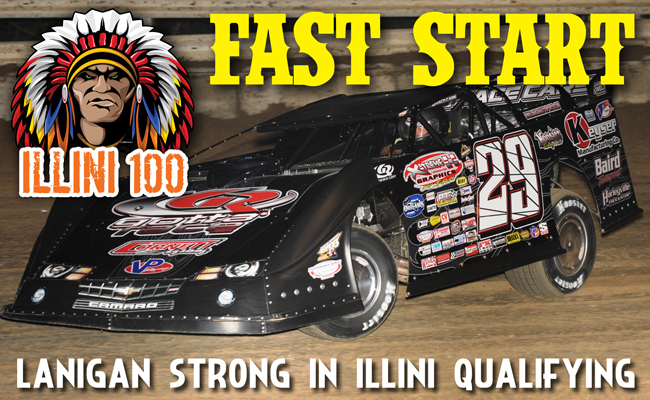 Along with winning his Qualifying Heat Race, Lanigan earns a place in Saturday’s top-eight redraw for the prestigious 100-lap, $20,000-to-win event at the quarter-mile bullring in central Illinois.

“The car was pretty good, track is a little bit different this year, seems like they got the top cut down, you kind of have to get around the bottom,” stated Lanigan, of Union, Ky., after his fastest qualifying effort. Lanigan, who claimed the $5,000 Spring 50 at Florence (Ky.) Speedway during an off-WoO LMS weekend, is looking for his first Illini 100 victory. “It was a new car we had at Florence, same one we brought here tonight, seems like a pretty good piece, so we’ll see what we got.”

Then it was time for the Illinois natives to shine in an effort to keep that $20,000 payday in the Land of Lincoln.

Shannon Babb of Moweaqua, Ill., was victorious in the second heat race by taking the win over Tim McCreadie of Watertown, N.Y., Scott Schmitt of Tonica, Ill., and Jason Feger of Bloomington, Ill.

Kevin Weaver of Gibson City, Ill., the fastest Group “B” qualifier, won the third heat race in his Bob Pierce Race Car over Frank Heckenast Jr. of Orland Park, Ill. Completing the top-four were Brian Diverley of Springfield, Ill., and Joe Harlan of El Paso, Ill. Weaver won his heat race from the bottom of the track.

“There was just more traction on the bottom,” said Weaver, the 2000 DIRTcar Summer Nationals champion. “Farmer City is known to be on the bottom early and move to the top later so last week we came here and ran the bottom of turn one and two and the top of three and four, we won the normal race but I think we we’re better around the bottom.”

Bobby Pierce of Oakwood, Ill., raced from the tail of the fourth heat to the lead in only five laps en route to winning over Rick Eckert of York, Pa., who made his debut filling in for three-time champion Josh Richards in the #1 Rocket car. Third was Brandon Sheppard of New Berlin, Ill., who had been filling in for Richards since the opener in Florida, and fourth was Rick “Boom” Briggs of Bear Lake, Pa.

The Illini 100 wraps up on Saturday night with the Last Chance Showdowns and the $20,000-to-win A-main. The pit gates will open at 12:00 pm and Hot Laps are slated for 5:00 pm. The DIRTcar UMP Modifieds, DIRTcar Stock Cars and the DIRTcar Pro Late Models will also be on the racing card for Saturday.

Additional information on the Illini 100 can be obtained by visiting www.farmercityracing.net .