Grooving on the Gumbo: Sheppard wins at Senoia 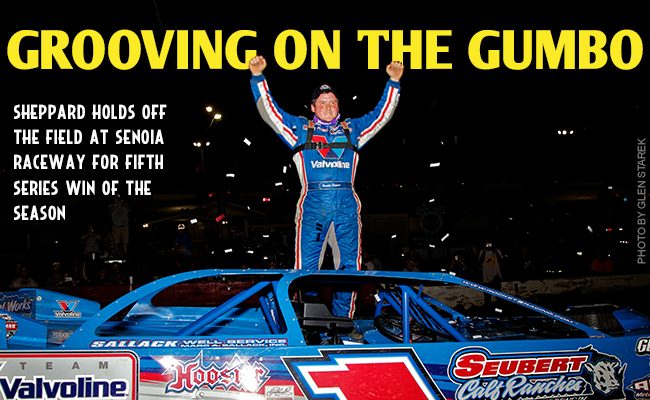 Grooving on the Gumbo: Brandon Sheppard Bests the Field at Senoia

SENOIA, G.A.— June 3, 2017— The World of Outlaws Craftsman® Late Model Series took the track at Senoia Raceway for the first time ever for the third annual Billy Clanton Classic. Despite this race being many of the drivers first time on the unique gray gumbo surface, everyone seemed to enjoy how racy the track was all night long. It was ultimately Brandon Sheppard who was able to hold off the field to land his fifth Series win of the season.

“We got the win and it was tough racing out there,” said Sheppard. “Lap traffic was tricky and if you hit the top just right it was awesome and you couldn’t hardly move off of it and be fast. Congratulations to Terbo. He raced me hard and we had a lot of fun out there.”

Tyler Erb left everything he had on the track come the checker flag but he came up just a little short. The young gun was putting Sheppard to work throughout all 50-laps as he was trying find the line to his first Series win. With the help of lap traffic, Erb was able to cut down Sheppard’s lead to only .6 seconds but unfortunately a few cautions would throw away the ground he had gained on the leader and eliminated the obstacles for Sheppard.

“I hated to see all of those cautions,” said Erb. “Every time I would catch lap cars was when Brandon would start having to move off of that top. I might have had a shot but we gave it everything that I had so we will just have to try to come back next year and try again.”

Eric Wells also found his way to the podium but it wasn’t an easy task to get there. Wells, Erb, and Clanton found themselves three wide throughout the feature event dueling for second and third. Chub Frank also found himself into the mix with Erb, Wells and Clanton after battling with Devin Moran and Clint Smith in similar fashion.

“This is more like the kind of tracks that we like,” said Wells. “I was telling my crew guys that it is too bad we don’t live in Atlanta because we would run every class this place has weekly. I love this place. I had a lot of fun out there. This place was really racy tonight. I hope we get to come back again.”

Although Clanton finished one spot short of the podium he was still all smiles in Victory Lane as he spoke about his late father, Billy Clanton, and the race that was created in his honor three years ago.

“It’s hard to be up here and him not being with me and he has been gone for a couple of years now,” said Clanton. “As long as we can live his life like we’re doing and just honor him as much as we can. He’s done a lot for the racing in the south east. It’s an honor to be here tonight.”

Chris Madden broke his drive shaft during the heat races which took him out of the race and put him in to the Last Chance Showdown. Madden started seventh in the Last Chance Showdown but was able to prove how capable he was at maneuvering around the track after passing eight cars to win. Madden was then placed 19th in the feature before sailing at lightning speed to claim the fifth-place finish.

For complete results from the World of Outlaws Craftsman Late Model Series event at Senoia Speedway visit the results page.