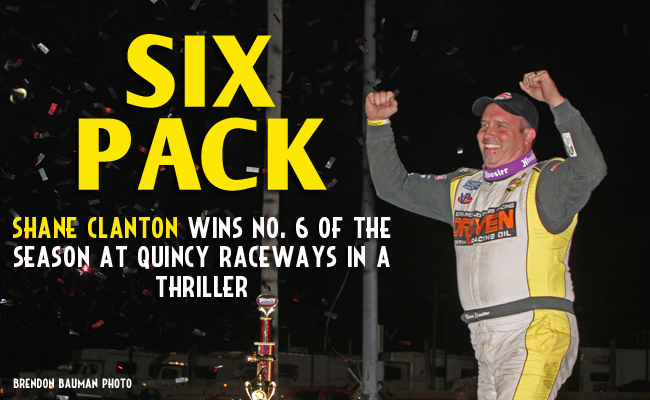 QUINCY, Ill. – July 28, 2016 – Shane Clanton prevailed in a Thursday night thriller at Quincy Raceways, fending off a late-push from the other World of Outlaws Craftsman® Late Model Series drivers. With this win, Clanton takes sole possession of fourth on the series’ all-time feature wins list (35). It is his sixth series win in 2016.

“Our car was just excellent tonight,” said Clanton, who thought he chose all the right lines. “It went where we needed to go – top to bottom.”

Though Clanton led the 24-car field into the green flag of the “Workforce 40,” he was not able to keep it throughout the entire feature. An early caution with two laps completed regrouped the quickly dividing field. Illinois-native Brian Shirley used the restart to his advantage. He solidified the top spot by building his momentum through the top line of the track; Clanton could not contest such a hard charge from Shirley’s No. 3s Bob Cullen Racing/ Arnie Ranta Longhorn machine into first place.

By lap 12, Clanton mustered up enough speed for he and Shirley to exchange first place three times, weaving in and out of each other. The two traded some paint entering the front stretch, and Clanton was able to slam the door and break away momentarily. In the five lap window, the top five did not shuffle. The top three – Clanton, Shirley and a fast approaching Josh Richards respectively – began to increase their margins from each other. It was short-lived. It took a second caution on lap 18 to open up shootout for the lead.

“I was just biding my time at the bottom and kept getting lower and lower,” said Clanton, who held onto the lead. “The car just kept getting better and better. Hats off to the guys who worked on the racetrack. It was really racey.”

Exiting turn one, Shirley got into Richards’ No. 1 Valvoline/ Seubert Calf Ranches Rocket car, causing it to spin out. Richards played damage control for the remainder of the feature, finishing eighth. Not only did this restart take Richards out of contention, but it also offered a chance for 2011 series champion Rick Eckert.

“The cushion was really tall and it was hard to run against it,” said Shirley, who rode the top of the track for the majority of the race. “It was one of those deals where we should’ve moved down. We just have to get a little better.

[Josh] moved up a little bit in turn one and was already committed to the top, and I didn’t mean to get into him.  Last thing I’d want to do is spin anybody out. It was my fault out there.”

On the restart, Eckert carried more speed than Shirley, finally capturing the second spot with 16 laps remaining. From there, the top three were set in stone. Eckert made a last-ditch run at Clanton, who once carried a second-and-a-half lead over him. With lapped traffic slowing down Clanton and Eckert full-steam ahead, there seemed to be an impending battle between the two. Eckert ran out of real-estate though, and he could only close the gap to a fraction of a second before the checkers.

“I got the gain on [Clanton] really hard and his tire was slowing-up a little bit,” Eckert said. “Mine was probably getting a little better. I got to thank every sponsor on this car. I’m happy. Thank you for everyone coming out.”