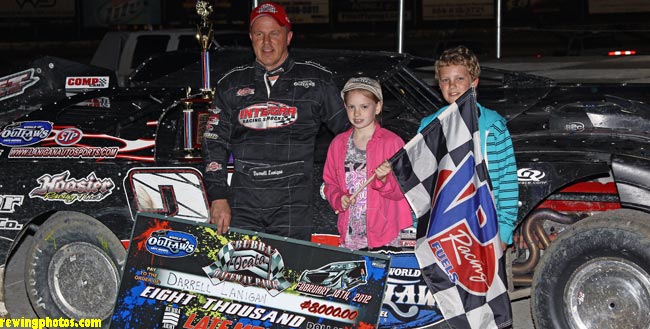 Lanigan drove off the outside pole starting spot to lead the A-Main from flag-to-flag, but his third win at BRP in as many years did not come without a fight. He had to stave off a strong late-race challenge from Josh Richards of Shinnston, W.Va., to preserve a triumph worth $8,700.

The race also gave Lanigan back-to-back wins to start the 2012 WoO LMS campaign and was his 28th career checkered flag on the national tour, tying him with Steve Francis for second on the win list since 2004.

“This new (Rocket) chassis out of the box has been awesome,” said Lanigan, who won the WoO LMS season opener on Feb. 11 at Screven Motor Speedway in Sylvania, Ga. “And a brand-new Cornell motor – man, he’s putting the power down. I think we got some motor for ’em this year.”

Richards, 23, slid to the inside of Lanigan rounding turns one and two on lap 38, but his bid was thwarted when Lanigan pulled ahead down the backstretch. The two-time WoO LMS champion settled for a runner-up finish in his father’s Rocket car, 1.174 seconds behind Lanigan.

Shane Clanton of Fayetteville, Ga., finished third in the Kennedy Motorsports Capital Race Car after climbing as high as second from the fifth starting spot. Mike Marlar of Winfield, Tenn., who hopes to follow the WoO LMS for the first time in 2012, placed fourth in the Bryson Motorsports Rocket and Gregg Satterlee of Rochester Mills, Pa., advanced from the 11th starting spot to complete the top five in a Rocket machine.

Lanigan, who outgunned the pole-sitting Richards for the lead at the initial green flag, nearly become too conservative with the finish in sight.

“I looked at Josh’s tires under that last caution (lap 30) and I saw they were blistered,” said Lanigan. “I thought mine were gonna blow out, so I was trying to take it a little easy and I almost got passed (by Richards on lap 38).

“It got interesting there. He got in there real hard (in turns one and two), but he raced me real clean and I really got to thank him a lot.”
{vimeo}36950651{/vimeo}
Richards, who slipped to fifth on the opening lap, battled back to second place by lap 14. It took him until lap 38 to draw close enough to Lanigan to make a serious bid for the lead.

“I kind of killed my tires trying to get back up through there, but I gave it all I had those last few laps,” said Richards, who has two runner-up finishes, a fourth and a fifth in four career starts at BRP. “I drove off in there (in turns one and two) and I knew I left just enough room where (Lanigan would) be fine. If he messed up just a little bit I could’ve prevailed, but he held us off.”

Clanton, 36, briefly threatened Lanigan early in the A-Main before losing contact with the leader. He settled into third place for the final 26 circuits to secure his second top-five finish in as many starts this season.

“I thought I had something for Darrell, but he found that bottom where he could just get off of turn four,” said Clanton. “He was better than me in one and two also and Josh was able to slip by us for second, so we just maintained the rest of the way. But I feel good about the car. To keep pace with these two, it feels good right now.”

Marlar, 33, saw his hopes of registering his first-ever WoO LMS victory effectively evaporate once two caution flags and one red flag flew between laps 27 and 30. Prior to that, he appeared ready to challenge the leaders.

“I put a harder right-rear tire on than they had,” said Marlar, who started fifth and was attempting to overtake Clanton for third when the race’s first caution flag was needed on lap 27. “It took me about 20 laps to get going, so right before that first caution flag came out I was able to get to them. But after the caution and then that red (on lap 28), we just weren’t the same.”

Satterlee, 25, cracked the top five on a lap-28 restart and stayed there to the finish. He fell one spot short of matching his career-best finish on the WoO LMS.

The race’s two caution flags were caused by Rookie of the Year contender Jared Hawkins of Fairmont, W.Va., who slowed with a flat left rear tire on lap 27, and Tim McCreadie of Watertown, N.Y., who stopped on lap 30 while running 10th and pitted to change his car’s bald right-rear tire.

The most serious accident occurred on lap 28 when Tim Fuller of Watertown, N.Y., clipped the outside wall between turns one and flip and barrel-rolled. He escaped the accident uninjured and said his car sustained mostly body damage.

With 51 cars signed in for action, Richards was fastest in Ohlins Shocks Time Trials. He turned a blistering lap of 13.994 seconds on a track that sported steeper banking and a wider surface than it did when the WoO LMS last visited in March 2011.