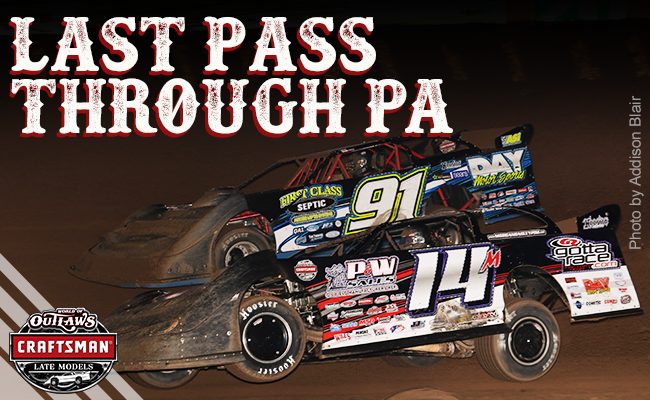 CONCORD, NC— Aug. 7, 2017— The World of Outlaws Craftsman® Series is on the downhill swing of the 2017 season and gearing up to hit the road back to Pennsylvania for four more shootouts.

The Series has already made one stop at Lernerville Speedway this season for the storied Firecracker 100. Mother nature forced the Series to merge two separate show into one action-packed day during this year’s Firecracker 100. Current Series points leader, Brandon Sheppard, stole the matinee 30-lap Feature before Brandon Overton landed his second-ever Outlaws victory during the 100-lap Finale.

Although the upcoming Working Man 50 is at the same track, this time around will be much different as track conditions and the length of the Feature could drastically change the outcome.

“I usually always go pretty decent there, although the conditions were quite different for the Firecracker because of Mother Nature, but they couldn’t control that,” said Bagley. “They tried really hard to give us a great track, and the staff at Lernerville did a great job considering the short amount of time that they had.”

In 2016, Bagley tied his career-best finish with a second-place at the Working Man. His other second place finishes with the World of Outlaws came in 2014 at Deer Creek Speedway and Brown County Speedway.

“Last year for the Working Man we took a car that was sitting at my shop that we hadn’t been running all year, and we brought it out for that event,” said Bagley. “The format of the show, the car, and the track conditions all played in our favor that night.”

Jimmy Mars robbed Bagley of his first-ever Outlaw victory by outperforming the field at Lernerville. Mars landed his first Series win since 2014 over Bagley and Billy Moyer.

“This year, we have a different style car, and we are still working on it and tinkering with it. Hopefully, we can find out a little more on it by the time we get to Lernerville so we can be a little faster.”

The following night the Series will head to Selinsgrove Speedway for the Late Model National Open. Selinsgrove Speedway is a track in in which Rick Eckert planted his racing roots with the guidance of his late father, Ervin “Junior” Eckert, who visited the track regularly.

Junior passed away earlier this season, but his passion for racing lives on through his son. Many drivers show support of the Eckerts by displaying a “00 Junior” sticker on their cars.

The final jaunt through PA for the World of Outlaws Craftsman Late Model Series is just around the corner. For more information on coming events visit the Series website.