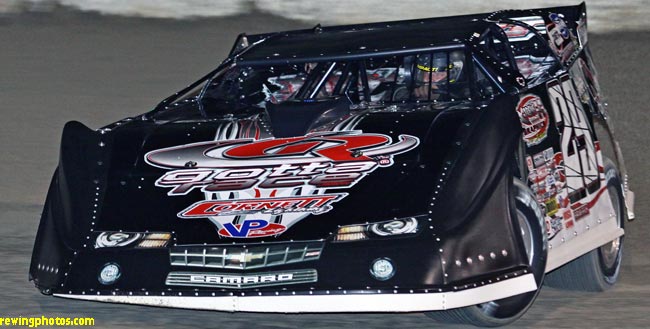 ROSSBURG, OH – June 8, 2012 – Darrell Lanigan is tired of ringing up close-but-no-cigar finishes in the Dirt Late Model Dream by Ferris Commercial Mowers since earning his lone triumph nearly a decade ago.

The ‘Bluegrass Bandit’ dearly wants another $100,000 triumph at Eldora Speedway – and if current momentum and recent performance in crown-jewel events at the famed half-mile mean anything, his return to the Dream’s Victory Lane stage could very well come with the running of the DIRTcar UMP-sanctioned race’s 18th edition this weekend (June 8-9).

“This is definitely gonna be a good year to go up there and try to win the thing,” said Lanigan, a resident of Union, Ky., who celebrated his 42nd birthday on June 3. “The car’s hot, everything’s clicking for us and we’ve been good (at Eldora) every time we’ve gone there the last few years.

“We’re gonna go up there and see what we can do. It’s been a long time now since we won (the Dream), so hopefully we’re due to get some of that luck you need to win there.”

Lanigan, of course, is tearing up the World of Outlaws Late Model Series this season, leading the points standings by a commanding 108-point margin on the strength of a tour-best five wins in 15 A-Mains, including three of the last four. He won the ‘Jackpot 100’ – to the tune of $25,000-plus – on May 26 at Tyler County Speedway in Middlebourne, W.Va., and has already broken the $100,000 mark in series earnings in 2012, more than double the second-place driver in the money-won rankings.

With his sterling first half of the WoO LMS schedule, Lanigan has deservedly garnered recognition as one of the country’s five hottest dirt Late Model drivers, joining Scott Bloomquist of Mooresburg, Tenn., Billy Moyer of Batesville, Ark., Don O’Neal of Martinsville, Ind., and Jimmy Owens of Newport, Tenn. Every member of the star-studded group is a former Dream winner, and division observers are overwhelmingly forecasting that one of them will hoist the Dream’s 100-grand check on Saturday night.

Lanigan would seem to be the driver most overdue for Dream glory. Of the Fabulous Five, he’s gone the longest since last winning the race, having captured the 100-lap event in 2003. He also owns one of the show’s most impressive performance records.

Lanigan was especially strong in last year’s Dream, bidding repeatedly to pass Moyer for the lead until a skip that developed in his car’s engine late in the race caused him to slip to third at the finish, behind first-time winner O’Neal and Moyer. He returned to Eldora last September and nearly won the prestigious World 100 for the first time in 18 career starts, engaging in a wild late-race battle for the lead with eventual winner Owens and O’Neal before settling for a fourth-place finish.

Not surprisingly, Lanigan has plenty of reasons to feel confident about his chances this weekend.

“I think we’re just gonna stay on our gameplan (at Eldora),” said the always-cool Lanigan, who ran his Cornett-powered Rocket mount through DIRTcar UMP technical inspection at the speedway on Thursday afternoon. “The car’s been really good this year, so we’re gonna stay on basic stuff and go up there and not try to outsmart ourself. We’re just gonna focus on trying to win the race.”

Lanigan knows what winning the Dream feels like and wants to relive the joy.

“Anytime you can get a win up at Eldora, it’s something special,” said Lanigan, whose ‘Big E’ resume also boasts four American Late Model Series feature wins (one each in ’95, ’96, ’98 and ’03) and a triumph in the 2006 DIRTcar UMP Nationals. “But when you win one of the big ones, it’s something you’re gonna remember the rest of your life.

“It’s definitely one of my favorite tracks,” he added. “I love going up there and running well. Hopefully we can get another (Dream) win this year.”

Lanigan is one of eight WoO LMS regulars planning to compete in this weekend’s Dream. The other World of Outlaws travelers include:

In addition, two-time WoO LMS champion Josh Richards of Shinnston, W.Va., will make his first dirt Late Model start since vacating his father Mark’s Rocket Chassis house car in April to pursue a ride in the NASCAR Nationwide Series. The 24-year-old star, who has qualified for the Dream A-Main five times with a top finish of sixth in 2010, will drive the Ernie Davis-owned No. 25.

Richards will compete against his father’s No. 1 machine, which will be driven this weekend by Brandon Sheppard of New Berlin, Ill. The 19-year-old talent will make his Dream debut, but he qualified for the 2011 World 100, finishing 16th.

The Dream weekend will kick off on Friday night (June 8) with the traditional time-trial runs and newly-created qualifying features to fill Saturday’s six heat races. In addition to the heats on Saturday evening (June 9), the Dream will be preceded by C- and B-features and new scramble races.

Tickets for the Dirt Late Model Dream remain available on-line at www.EldoraSpeedway.com or by calling the speedway office at 937-338-3815.