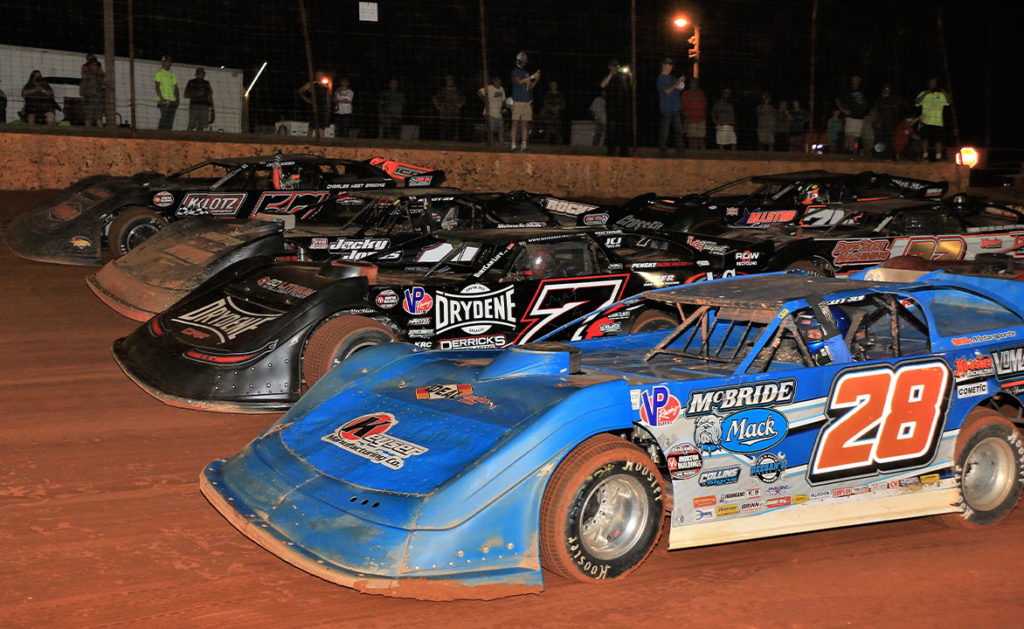 A Labor Day weekend tripleheader awaits the World of Outlaws Late Models as they travel South for the first time since April.

The Series will visit three tracks in three states, starting with a return to Cherokee Speedway in Gaffney, SC, for the re-scheduled Rock Gault Memorial on Thursday, Sept. 2.

Some of the top names in Late Model racing are expected to battle for the $40,000 prize, including Brandon Sheppard and Jimmy Owens, who won split-field 25-lap Features in March. Sheppard’s win came on a thrilling last-lap pass when the New Berlin, IL driver powered around Dale McDowell on the outside of Turn 2.

The Most Powerful Late Models on the Planet move further South on Friday, Sept. 3, to visit Lavonia Speedway in Lavonia, GA. It’s the fifth trip to the 3/8-mile track, as the Series will run a 40-lap, $10,000-to-win Feature.

Last season fans were treated to an epic finish as Brandon Overton traded the lead with Dennis Erb Jr. for his then third victory of the season. There have been four different winners in four appearances at the speedway.

The final stop of the weekend is a return to Tennessee for the third time this season and a visit to Volunteer Speedway in Bulls Gap, TN. A $10,000 top prize will be on the line once again in a 40-lap Morton Buildings Feature.

The Series made two stops at the track in 2020 as Brandon Sheppard and Zach Mitchell each found Victory Lane. Mitchell’s win was his first career World of Outlaws triumph; as the Enoree, SC driver held off challenges from veteran driver Dale McDowell to score the upset win.

Past success at all three tracks leaves Chris Madden excited to return to the South. The only venue “Smokey” hasn’t won a World of Outlaws event at is Cherokee, but he has 27 total wins at the track in total.

He found Victory Lane at the South Carolina track earlier this year with the Drydene Xtreme DIRTcar Series, leading him to his second consecutive championship.

The Gray Court, SC driver is tied with Brandon Sheppard for the most wins in 2021 (4) and is second in the Series standings—88 points behind the “Rocket Shepp.”

Sheppard’s points lead is another step up the mountain toward World of Outlaws history. The three-time and defending champion is one Series title away from matching Josh Richards for the most championships (4).

The New Berlin, IL driver is also a win away from tying Darrell Lanigan for second all-time (74) and five wins away from joining Richards at the top of that list (78).

Madden and Sheppard both must contend with Brandon Overton, whose crown jewel success in 2021 may go unmatched.

“Big Sexy” already has three World of Outlaws wins in 2021, including the $30,000 payday from the Firecracker 100 in June. He’s also beat the best Late Model racing has to offer at Eldora, where he won $273,000 at the Dirt Late Model Dreams.

Along with the rest of the World of Outlaws tour regulars, those three drivers must also contend with a wide field of regional competitors who always have a shot to reach Victory Lane when the Series moves South.