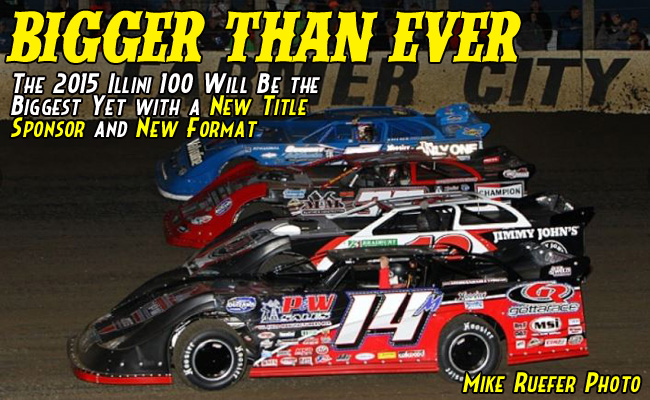 Officials with the World of Outlaws Late Model Series and Farmer City Raceway on Monday announced an agreement with Douglas Dodge Ram Trucks in Clinton, Ill., to serve as title sponsor of the prestigious early-season spectacular while also unveiling a new format that will split the event into two complete WoO LMS programs March 27-28.

“We are excited to welcome Douglas Dodge Ram Trucks on board as title sponsor of the Illini 100,” said WoO LMS Series Director Tim Christman. “The Illini 100 has grown into one of the biggest and most exciting race weekends of the year and the addition of a great title sponsor and the new format changes will only help to continue that growth. Adding a complete program on Friday night will certainly add excitement to the weekend while the Saturday event will rank as one of the biggest single-day payouts of the season. We believe it’ll be a hit among both race teams and fans.”

General admission ticket prices are $25 for Friday and $35 for Saturday. Two-day tickets with a reserved seat are available in advance at the reduced price of $50. Two-day ticket prices at the gate will be $55 without reserved seating. Tickets are available now at http://dirtcar.ticketforce.com. Less than 10 camping spots remain available in turns one and two. They are $75 for the weekend and may also be reserved at the above link.

Since its inaugural running in 2008, the Illini 100 has risen to one of the Midwest’s premier dirt Late Model events in serving as the unofficial start to the season for many of the region’s race teams and fans. The event broke new ground for payout at a dirt Late Model race in Illinois with the 2008 Illini 100’s $20,000 winner’s purse marking a then record high for single-race winner’s pay at a dirt Late Model race held in the Land of Lincoln. The event continues to rank among the region’s biggest dirt races in both payout and prestige.

“The Illini 100 has really been a great boost for racing in our region,” said Farmer City Fairboard President Rick Corneglio. “It has set a new standard for payout on a big event in addition to expanding the racing season by starting early. Seems like anywhere you go, racing fans know about Farmer City and the Illini 100. It has been a tremendous addition to the Farmer City Fair’s 75-plus years of dirt track racing tradition. Each year we look forward to kicking off the season and greeting friends and fans, old and new, for an exciting season of racing.”

The Illini 100 has routinely matched the hype of its blockbuster status with thrilling on-track action. The event’s inaugural running in 2008 remains one of the best dirt Late Model events ever contested in Illinois with its eight lead changes among five drivers and thrilling late drama.

Storming from the tail of the field, Shannon Babb of Moweaqua, Ill., nearly scored a home-state victory for the ages in the 2008 Illini 100 A-Main, but his last-to-first rally was spoiled by National Dirt Late Model Hall of Famer Billy Moyer of Batesville, Ark. Topping off an action-packed 100-lapper, Moyer charged ahead of Babb on lap 99 and turned back Babb’s last-ditch effort to regain the lead in the final corner.

Moyer’s dramatic victory in the inaugural Illini 100 was a sign of more to come for the veteran driver. Through six Illini 100s to date (the race was rained out in 2011), Moyer has claimed three victories and is the only driver to win the event multiple times.

The 2009 Illini 100 produced another dramatic A-Main with two superstar drivers battling to the finish. Shane Clanton of Zebulon, Ga., pressured polesitter Brian Birkhofer of Muscatine, Iowa, for most of the distance before finally taking command on lap 94. Birkhofer mounted a countercharge through the final six circuits, but Clanton held on through traffic.

Moyer returned to the spotlight at Farmer City in 2010, in an Illini 100 A-Main that brought back memories of Moyer’s victory in the inaugural event two years earlier. In a race that featured five lead changes among four drives, Moyer found himself once again battling Babb in the closing laps. Moyer pulled ahead of Babb on lap 72 and turned multiple challenges from the home-state hopeful through the race’s closing laps.

After a rainout in 2011, the Illini 100 returned in full force in 2012 with another of the sport’s heavyweights etching his name on the race’s impressive list of winners. Jimmy Mars of Menomonie, Wis., became the race’s first flag-to-flag victor, holding off late challenges from three-time WoO LMS champion Darrell Lanigan of Union, Ky., in leading all 100 laps.

Fans attending the 2013 Illini 100 saw Moyer win the race for the third time, although they weren’t aware of it on the night of the race. Moyer actually crossed the finish line second that night, while Illinois standout Jason Feger of Bloomington, thrilled his home-state crowd as he appeared to become the first Illinois driver to claim an Illini 100 trophy. However, Feger’s dream come true was short lived. Post-race tire testing determined that Feger had used chemically altered tires in the event, leading Feger to be disqualified and Moyer to be named the race winner.

After multiple near-misses, Babb finally broke through to give the Illinois faithful a home-state Illini 100 winner in 2014. Charging forward on a lap-45 restart, Babb swept around Lanigan and fellow Illinois standout Bobby Pierce of Oakwood, to pull ahead. Babb never relinquished the lead, pulling away from Lanigan on a late restart to claim an emotional victory.