First Quarter of the 2017 Season Recap 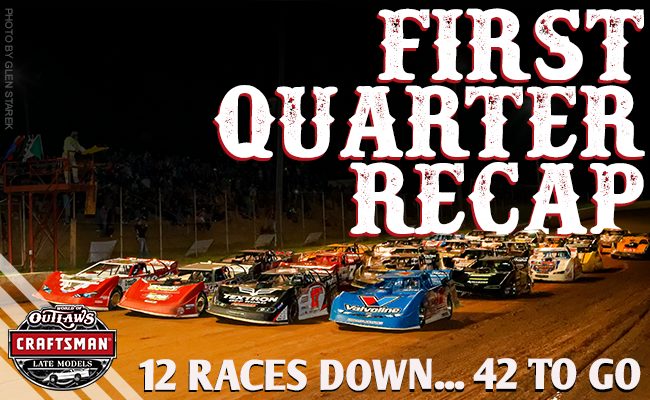 First Quarter of the Season Recap

The World of Outlaws® Craftsman Late Model Series has hit the quarter mark of the 2017 season as 12 of the 54 scheduled races have been completed. Thus far, 13 full-time drivers and their crews, along with Series officials, have traveled countless of miles to bring Late Model shootouts to dirt tracks across the nation spanning from Texas to Illinois to Florida and tracks in between. The fans have seen nine different winners dance under confetti in Victory Lane, including full-time Outlaws Brandon Sheppard, Shane Clanton, Rick Eckert, Chris Madden, and Brian Shirley.

As predicted before the season started, Sheppard paired with the Rocket Chassis house car has proven to be a power house on the tour and the one to beat on the track. Although this is Sheppard’s first year with the Series as a full-time driver, the Rocket1 has a total of four Series Champion titles to its name alongside a detailed track notebook from car-owner Mark Richards. Sheppard has claimed the checkered flag three times this season, putting him one win over 2015 Series Champion Shane Clanton. Sheppard’s three wins came at Whynot Motorsports Park, Farmer City Raceway and Fayetteville Motor Speedway. During these three races, Sheppard led 150 of 175 total laps.

Sheppard is currently leading the points race by 94 points over the second position in the standings — the youngest in the Series — Tyler Erb. This year marks Erb’s sophomore season with the Series, and he has improved exponentially from his rookie career. At this point last season, Erb had one top-10 finish. This year is a different story.  Of the 12 races so far this season, Erb has collected 10 top-10 finishes, including three top-fives. Twice this season Erb has finished one position short of landing his first World of Outlaws Craftsman Late Model Series win; the first being at Screven Motorsports Complex and the second at Fayetteville Motor Speedway. Erb is the only driver in the top-five of the Series Standings who has yet to claim a Series victory, but it’s only a matter of time before the No. 91 parks it in Victory Lane.

A couple of full-time drivers have had up-and-down seasons to date, including Shane Clanton. A consistent week of racing in Florida, which included a win, allowed him to take home the coveted Big Gator trophy at the conclusion of DIRTcar Nationals in February. A rough March and April left Clanton searching for his early season success, but a brand-new Capital Race Car has seemed to be the quick fix he needed, getting his season back on track by landing his second win of the season at Cherokee Speedway. Clanton is tirelessly digging himself out of a points hole as he appears in the top-five of the standings for the first time this season after the conclusion of the most recent race at Duck River Raceway.

Brian Shirley has also hit some bad luck lately, but things are looking up for him and his crew. The last couple of events Shirley has been bitten by some mechanical issues, forcing him to retire early at Fayetteville Motor Speedway and Smoky Mountain Speedway. His crew has been working tirelessly to correct those issues, and they seem to be coming to an end after an impressive race at Duck River Raceway Park, where he won his heat and then passed 13 cars to finish seventh.

The Battle Between Rookies

Devin Moran and Donald Bradsher are plugging away at their rookie campaigns. World of Outlaw Craftsman Late Model Series Rookie of the Year points are based on the drivers’ best 30 finishes throughout the season. With only 12 races in the books, Devin Moran is currently leading the Rookie battle. His best finish was second at LoneStar Speedway. Yet this battle is far from over. Bradsher is steadily improving every race with his best finish being on his home turf of North Carolina at Fayetteville Motor Speedway; he finished in fifth.

A total of 148 Super Late Model Drivers who have tried to outrun the Outlaws and steal the loot this season. Only four drivers have been successful at the final wave of the checkers: Don O’Neal (Volusia Speedway Park), Timothy Culp (LoneStar Speedway), Brandon Overton (Smoky Mountain Speedway) and Mike Marlar (Duck River Raceway). O’Neal and Culp landed their first career Series wins, etching their names in the history books next to the best Late Model drivers in the country. Meanwhile, Overton and Marlar both grabbed their second-ever Series wins in the same weekend during the Series swing through Tennessee.

Regional racers and local legends come out in force to face the Outlaws nose-to-nose in hopes of earning the title as the fastest guy in town. Nothing is sweeter than the chance to beat the best in the business; many have tried but few have succeeded.

Looking Toward the Halfway Mark

Leading us to the halfway mark of the season are some major crown jewel Late Model events, including the Series trip to Lernerville Speedway for a three-day shootout from June 22-24 for the 11th annual Firecracker 100 with the final day featuring 100-laps and $30,000 on the line. Four days later, the Series will join forces with the World of Outlaw Craftsman Sprint Car Series at the FVP Outlaw Clay Classic at The Dirt Oval at Route 66 Raceway on June 28.

To kick off the second half of the season, the Series collides with the DIRTcar Summer Nationals tour at Terre Haute Action Track on June 30 and Federated Auto Parts Raceway at I-55 on July 1.