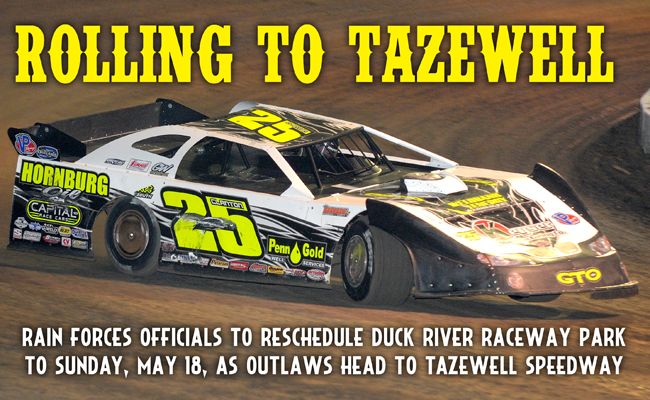 Heavy rain hit the track in the middle of qualifying, washing out the rest of the program. Track and series officials rescheduled it for Sunday, May 18, setting up a triple-header weekend with 201 Speedway in Sitka, Ky., on Friday, May 16, and Smoky Mountain Speedway in Maryville, Tenn., on Saturday, May 17.

“It’s unfortunate for the fans and drivers who traveled so far to see the World of Outlaws stars,” said Series Director Tim Christman. “We hate it for track owner Bob (Harris) who had a record crowd tonight as well.”

Thirty-eight cars entered the event and Group “A” of Ohlins Shocks Time Trials had completed. Shane Clanton of Zebulon, Ga., was the fastest car in Group “A” with a 11.862-second lap. Clanton unofficially lowered the track record in Qualifying. A complete new program will be run when the series returns on May 18.

The World of Outlaws Late Model Series will be back in action Saturday night (April 12) at Gary Hall’s Tazewell (Tenn.) Speedway for another 50-lap $10,000-to-win event.