Drivers Searching for First Win of Season at Smoky Mountain 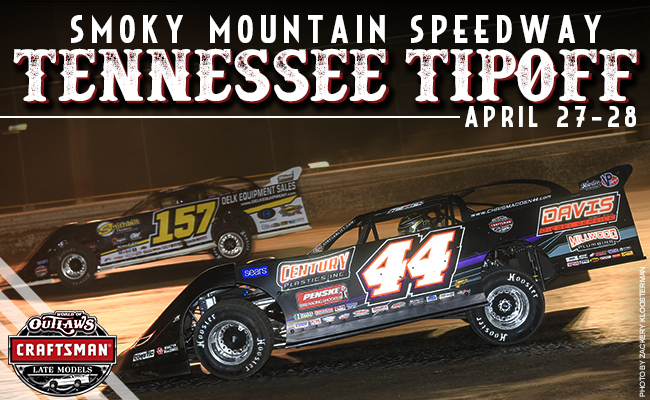 MARYVILLE, TN– April 25, 2018– This past weekend Mother Nature finally showed some mercy to the World of Outlaws Craftsman Late Model Series. After 62 days without being able to race due to bad weather, things certainly turned around in Meridian, MS with three beautiful days of thrilling dirt late model action. Brandon Sheppard and Billy Moyer Jr. found their way to Victory Lane on Friday and Saturday evening (April 20-21), cashing in $10,000 after the 50-lap events.

This week the World of Outlaws heads to Smoky Mountain Speedway for a night of practice on Thursday (April 26) followed by back-to-back 50-lap $10,000-to-win Craftsman Club Feature events on Friday and Saturday (April 27-28). Several drivers will be looking to bag their first World of Outlaws win of the 2018 season, including Chris Madden, Brandon Overton, Shane Clanton and Mike Marlar ­– just to name a few.

During the double-header weekend at Whynot Motorsports Park, Madden scored two third-place finishes. The Gray Court, SC native and his Barry Wright Race Cars team have proved to be one of the most consistent on the 2018 tour so far. Madden is currently only six points behind defending Champion Brandon Sheppard (who holds two wins to the season already on February 17 and April 21) in the Series Point Standings. During last year’s event at Smoky Mountain Speedway, Madden finished second behind Overton.

The winner of last year’s event is back in Randy Weaver’s No. 116 Dream Ride for the second consecutive season. Overton is still on the hunt for his first win of the season. Right now, his best finish is sixth at Volusia Speedway Park on February 15. Car owner Weaver hails from nearby Crossville, TN. The Dream Team and Overton are sure to be on their A-Game this coming week at Smoky Mountain Speedway.

Finishing second in the Series’ most recent race on April 21 was 2015 World of Outlaws Champion, Clanton. The Georgia Bulldog could taste victory at Whynot Motorsports Park but didn’t quite get the bite. He finished a slim 0.0645 seconds behind Moyer Jr. Clanton will be on the prowl at Smoky Mountain for that coveted first win of the season.

Marlar, Tennessee-native and full-time Outlaw for the first time in 2018, is happy to return to his home state. During last Saturday’s race, Marlar was the overall hard charger of the 50-lap event, passing a total of 20 positions on his way to finishing fourth.

Action gets underway on Thursday, April 26 with an open practice session for all competitors from 6 p.m. until 9 p.m. Racing will kick off on Friday, April 27 and conclude on Saturday, April 28. Both nights consist of full programs topped off with a 50-lap, $10,000-to-win Feature event.  For detailed event information please see our FAQs. We hope to see you at the Tennessee Tipoff for the season opener at Smoky Mountain Speedway.