Covert Pumped Up For Roaring Knob 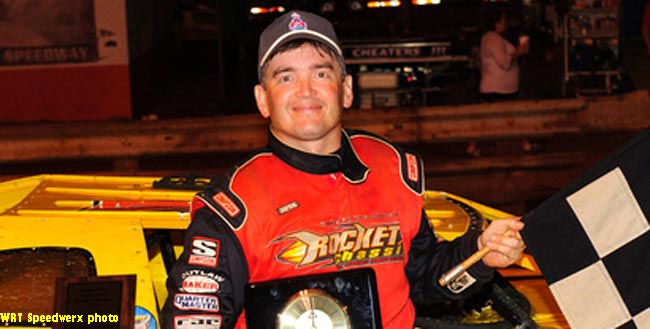 Jason Covert On The Joy Mining Machinery 50 Sunday (Sept. 4) At Roaring Knob: It’s Shaping Up As ‘One Of The Best Races Of The Year’

MARKLEYSBURG, PA – Sept. 1, 2011 – Jason Covert has a pretty straightforward message for any fan contemplating a visit to Roaring Knob Motorsports Complex for the ‘Joy Mining Machinery 50’ this Sunday night (Sept. 4).

“It’s gonna be one of the best races of the year,” the regional dirt Late Model standout said of the first-ever World of Outlaws Late Model Series event at the three-eighths-mile oval. “I guarantee it.”

Covert, 40, of York Haven, Pa., isn’t speaking in hyperbole when he talks up Roaring Knob’s $10,000-to-win holiday-weekend spectacular. He’s well qualified to praise the western Pennsylvania track – after all, he’s been running special events there since 2006 and has won five times, including a Three-State Flyers Series event less than three weeks ago.

A personable driver who is considered one of the top threats to upset the World of Outlaws stars when the national tour invades facilities in and around his native Keystone State, Covert is ecstatic that the series is headed to a speedway he ranks as one of his favorites.

“It’s an awesome racetrack,” said Covert, who lives just over three hours to the east of Roaring Knob. “As far as just plain racing, it’s one of the best racetracks I’ve ever been to. If your car’s good, you can go to the front. There’s plenty of room and you can run all over it.

“I’ve won races there on the bottom (groove) and I’ve won races with the right side of the car dragging the (outside) guardrail all the way around. When you can do that, you know it’s a fun place.”

Everything about Roaring Knob appeals to Covert – its unique D-shape (“Once you turn into one you never really stop turning until you get back over through three and four”), its picturesque location in the hills near the Pennsylvania/Maryland border (“I grew up in the mountains so it’s kind of like going home for me”), its atmosphere (“People sit in their chairs on the grass or watch the race from their cars on the side of the hill”), its staff (“You get treated right”). In case you haven’t figured it out, he’s an unabashed proponent of the track.

“We love going there,” said Covert, who won twice at Roaring Knob in 2010. “I’m just tickled that the Outlaws got a show there. I think it will be huge.”

Roaring Knob also happens to be a speedway where Covert probably has a better than average chance to break through for his coveted first career WoO LMS A-Main triumph. He counts it as one of stronger tracks – a fact he proved earlier this year when he went toe-to-toe for first place in the Knob’s Appalachian Mountain Speedweek event with World of Outlaws regulars Josh Richards of Shinnston, W.Va., and Austin Hubbard of Seaford, Del.

“That Speedweek race was Josh, me and Austin racing up front until Austin got a flat tire,” said Covert, who finished second behind Richards, the two-time defending WoO LMS champion, in the June 6 race. “The three of us were just absolutely having at it. Josh just whipped us in the end, but it was a ball running with them and gives us some confidence for the Outlaw show.”

A three-time title-holder with the defunct Mid-Atlantic Championship Series (MACS) and the defending champ and current points leader of the Three-State Flyers Series, Covert has been in contention for World of Outlaws glory in the past. He has eight top-five finishes in 23 A-Main starts since 2005; a runner-up finish on June 2, 2007, at Hagerstown (Md.) Speedway is his career high.

“We’ve had some good Outlaw runs, but I’ve laid eggs in Outlaw shows too,” said Covert, who has four WoO LMS top-fives at Hagerstown, two at Tri-City Speedway in Franklin, Pa., and one each at Virginia Motor Speedway and Delaware International Speedway. “Roaring Knob is a place I feel that we can go and at least be at ‘Outlaw pace.’ This is going to be a good measuring stick for us.”

Covert, who has driven Pennsylvanian Barry Klinedinst’s Rocket No. 43A since 2006, understands the supreme challenge facing him at Roaring Knob. While he may be a top regional racer, he must pick up his game to an even higher level to defeat the Outlaws.

“I feel our equipment’s as good as Outlaw equipment, but the guys are Outlaws because they’re the best,” said Covert, who has made three WoO LMS A-Main starts this season with a best finish of fifth (at Delaware International on May 12) to his credit. “Josh, (Darrell) Lanigan, (points leader Rick) Eckert, (Tim) McCreadie, all the Outlaws – they’re there because they’re the best at what they do. Not all of those guys are gonna have a bad night at the same time, which kind of tells you how hard it is to beat them.

“I feel like we can run with them from time to time, but their consistency is what makes them so good. They’re gonna be fast in all conditions. They’re not gonna fall off because, well, the track’s a little bit wetter or a little bit drier than usual. They adjust to things, they drive better, they know how to do their tires better, they know what they want with their shocks and their car, they’ve seen all the conditions they can see, and they’ve got more experience. This is a tough sport to begin with, then to try and beat professionals at it – it’s like a high school team going up against an NFL team. It just kind of leaves you speechless thinking about it.”

But as Covert certainly knows, the Outlaws aren’t unbeatable. He’s seen three of his Pennsylvania/Maryland contemporaries – Dan Stone of Thompson, Pa., Jeremy Miller of Gettysburg, Pa., and Jamie Lathroum of Mechanicsville, Md. – pull off upset victories in WoO LMS events and the significance of their accomplishments is not lost on him.

“When Stoney (Dan Stone) won (at Pennsy’s Tri-City on Sept. 3, 2007), we were driving home from Portsmouth (Ohio) that night after winning a $10,000 MACS race,” recalled Covert. ‘When we heard that Stoney won we were almost happier for him than we were for ourselves. We were like, ‘Stoney beat the Outlaws!’ We were just tickled to death for him – and we just came off winning 10-grand!

“Hey, I know what it’s like to win a national race,” added Covert, who has captured a Lucas Oil Late Model Dirt Series event. “It makes you feel legitimate, like maybe you can live the dream a little a bit – like if you could, you would go out there and run fulltime.”

No, Covert won’t be hitting the road with the World of Outlaws. He’s married with two kids and makes his living working for Verizon as the on-site phone and fiber-optics technician at the Three Mile Island Nuclear Generating Station in Londonderry Township, Pa., so a regional Weekend Warrior is what he will stay.

Covert would just like to join that select group of hobby racers with a WoO LMS victory under their belt.

“We’re gonna give ‘er heck,” said Covert, who has nine feature wins this season. “We’re not gonna back down. We’re there for a reason, and that’s to try and win the race. It won’t be easy, but if everything goes our way maybe we can pull it off.”

Gates are scheduled to open at 5 p.m., time trials are set to begin at 7 p.m. and racing will get the green flag at 7:30 p.m. Roaring Knob’s FASTRAK crate Late Models will also be in action in a $1,000-to-win event on Sunday night.

Tickets for the Joy Mining Machinery 50 are $30 for general admission, with kids 10-and-under admitted free of charge with a paying adult. Pit passes will be $40.

More details are available by logging on to www.RoaringKnob.com.

ABOUT JOY MINING MACHINERY
Joy Mining Machinery has over 90 years of experience as a global leader in the development, manufacture, distribution and service of underground mining machinery for the extraction of coal and other bedded materials. Headquartered in Warrendale, Pennsylvania, Joy Mining Machinery employs over 8,000 employees worldwide. For additional information, visit www.joy.com.