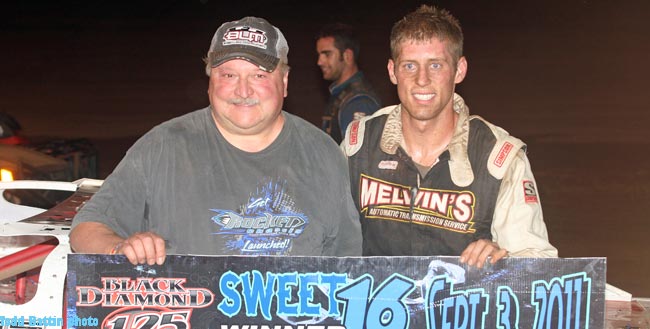 Over $150,000 On The Line During Unique World of Outlaws Late Model Series Event

Ready or not, on Saturday night (Sept. 1) the 26-year-old talent from Fairmont, W.Va., returns to the scene of his greatest triumph to chase a chunk of the $150,000-plus purse promoter Frank Wilson has posted for the unique, multi-feature World of Outlaws Late Model Series event at the quarter-mile ‘Bullring.’

“It doesn’t feel like it’s been a year,” Hawkins wistfully said. “It feels like we were just there. I still relive that day all the time.”

The second annual Black Diamond 125 was, of course, a memorable coming-out party for Hawkins. After pocketing the biggest payday of his young career with an $8,000 win in the Friday-night UFO Late Model Series tuneup, he upped the ante 24 hours later with a gargantuan $20,000 score in the 45-lap ‘Sweet Sixteen’ headliner that capped the event’s three-feature program.

Hawkins’s incredible rise to WoO LMS glory left him in a virtual daze when he climbed out of his Bobby Lake Motorsports Rocket car for the ‘Sweet Sixteen’ celebration.

“When we won that eight-grand on Friday night, I was just shocked,” said Hawkins. “I didn’t even care about the next day – I mean, I did to a point, but I was like, ‘Man, we just won eight-grand. Let’s get real – we’re not gonna get that 20-grand, but our car’s fast so let’s go see if we can run good and maybe get a decent finish.'”

The doubts still in Hawkins’s mind seemed to percolate to the surface during Saturday night’s Black Diamond 125 show when he managed just the 56th-fastest time-trial lap out of 87 entrants. Saddled with a starting spot deep in one of the program’s heat races (the qualifying results split the field into odd and even groups for separate heats, B-Mains and 40-lap, $10,000-to-win preliminary features), he thought he was coming back to earth after an evening in the clouds.

“I was like, ‘Well, yep, this is kind of how I figured this would work,'” Hawkins recalled of his qualifying effort. “But we worked our way up through the heat race (finishing third to transfer to the second Preliminary Feature, and then we were chasing (eventual winner Steve) Shaver down in the first feature but kind of used my stuff up to get there and settled for third.

“We drew the four (starting spot for the ‘Sweet Sixteen’ finale pitting the top-eight finishers in each Preliminary Feature) so that was a good sign, but I still knew that (Darrell) Lanigan, Josh (Richards), (Tim) McCreadie and all those kind of guys would be rolling by me before too long. But then we got the lead (on lap four) and all of a sudden the checkered flag falls, and we’re standing in Victory Lane again. It just happened so quick.”

Winning a five-figure race at his hometrack – Tyler County is just an hour-and-a-half drive from his home – added even more significance to his run.

“It was unreal,” said Hawkins. “There were so many fans there that I’m sure watched me grow up. I mean, I remember sitting in those stands all those years watching my dad race, so it was just perfect to win a big race there.”

With one spectacular weekend in his homestate, Hawkins went from an emerging regional star to a driver in the national dirt Late Model conversation.

“It definitely got my name out there,” Hawkins said of his triumph. “We went to some races after that, like (Indiana’s) Brownstown (Speedway for the Jackson 100) and Charlotte (Lowes Foods World Finals) and people I’d never really talked to before acknowledged me and congratulated me.

“We sucked at Charlotte, but at Brownstown I kind of went in with the same head on my shoulders from Tyler County, we got rolling pretty good and finished sixth. Things just started to click. I guess I just had more confidence and wasn’t as nervous as I used to be.”

Hawkins and veteran car owner Bobby Lake hoped to carry the Black Diamond 125 momentum into a pursuit of the 2012 WoO LMS Rookie of the Year award, but, after a rough start to the World of Outlaws campaign in Georgia and Florida during the month of February, they decided to table that bid for another season. He has again focused on regional action, racking five wins to date split between Roaring Knob Motorsports Complex in Markleysburg, Pa. (three victories), Cannonball Motor Speedway in St. Clairsville, Ohio (one) and Elkins (W.Va.) Raceway (one).

“This year we went into the year with the same mentality we had after winning at Tyler County, but we started having problems and blowing motors and I started getting down on myself,” said Hawkins. “We wanted to travel with the Outlaws, but the way things were going we just had to get away from it for a little bit. So we took a couple weeks off, regrouped, got another car together, and we’ve been pretty good since then. When we can finish, we’ve been good.”

The 2012 season hasn’t been quite the year Hawkins was anticipating, but it’s very closely mirroring his ’11 performance entering the Black Diamond 125. In fact, last Saturday night he won the R.H. Armstrong Memorial at Elkins for the second consecutive year, giving him reason to believe a Tyler County repeat could be in the offing.

“The weird thing is, last year was kind of like this year has been for us up to this point,” said Hawkins. “We won that R.H. Armstrong (at Elkins) and then went right into the Black Diamond, so hopefully it plays out the same way again.

“Plus,” he continued, “in Victory Lane (at Elkins) our tire went flat, so hopefully that’s a sign that bad luck is in the past for us and everything will go well this year at Tyler County.”

Hawkins plans to run the Black Diamond 125 in the Rocket No. 37 he debuted midway through this season, but the car he drove to victory in last year’s ‘Sweet Sixteen’ finale will be in the field. His younger brother, 22-year-old Jacob Hawkins, will be behind the wheel the wheel of the machine as Jared’s teammate on the Bobby Lake Motorsports operation.

“It’s always fun racing with my brother,” said Hawkins. “We’ve been teammates before. Last year we ran the Topless (50) at Tyler County and finished first and second, and at Brush Creek (Ohio) Jacob finished ahead of me in first feature and I finished ahead of him in the second feature.”

One of the notables planning to enter the event is two-time WoO LMS champion Josh Richards of Shinnston, W.Va., who will take advantage of a break in his NASCAR Nationwide Series schedule to return to his roots and chase his first-ever World of Outlaws victory in his homestate. He will drive for his father Mark’s Rocket Chassis house car team as a teammate to 19-year-old Brandon Sheppard of New Berlin, Ill., who came from deep in the field to finish second in Tyler County’s WoO LMS ‘Jackpot 100’ on May 26 in what was one of his first appearances as Richards’s replacement.

Saturday’s ‘Black Diamond 125’ headline program will the field split into two groups following Ohlins Shocks Time Trials (odd-numbered qualifiers in one group, evens in the other) and a full racing card – 15-lap heats, 15-lap B-Mains and 24-car, 40-lap preliminary A-Mains paying $10,000 to win – will be run for each. This year the top-10 finishers in each preliminary feature will move on to the ‘Talented Twenty’ finale, a 45-lap showdown that offers a gargantuan $20,000 first-place prize.

Each 40-lap preliminary feature and the ‘Talented Twenty’ finale boasts a full purse, including cool $1,000 payoffs for last place. Forty-eight drivers are guaranteed to earn at least $1,000.

Tyler County Speedway is located at the Tyler County Fairgrounds, three miles south of Middlebourne, W.Va., on State Route 18. The track sits 18 miles east of the Ohio River; halfway between Parkersburg, W.Va., to the south and Wheeling, W.Va., to the north; two hours from Pittsburgh and Charleston, W.Va.; and three hours from Columbus, Ohio.

Log on to www.tylercountyspeedwayonline.com or www.blackdiamond125.com or call 304-771-5661 for ticket information and other details about the Black Diamond 125.