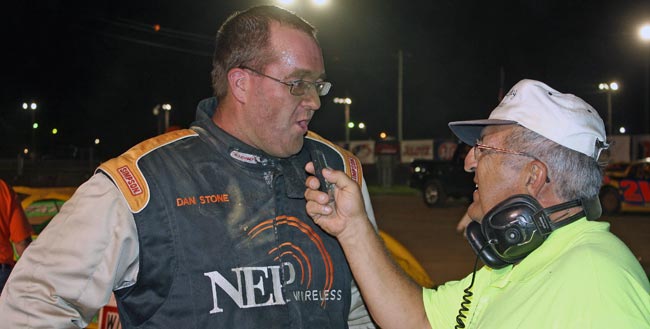 OUTLAW CHALLENGER: Dan Stone has given the stars of the World of Outlaws Late Model Series all they handle several times this season – at tracks he’s not all that familiar with, no less.

So expectations will certainly be high for the Thompson, Pa., driver this weekend when the national tour makes its first-ever appearance at Selinsgrove Speedway, a sprawling half-mile oval at which he’s turned a substantial number of laps in his career.

With the WoO LMS headlining a huge holiday-weekend doubleheader at the historic central Pennsylvania track – a twin bill that features the 40-lap, $8,000-to-win ‘Showdown On Sand Hill’ on Saturday night (Aug. 31) and the 50-lap, $10,000-to-win Late Model National Open Presented by Jeff’s Auto Body & Recycling Center on Sunday evening (Sept. 1) – Stone will have two chances on virtual home turf to flex his muscle against the country’s best full-fender chauffeurs.

“I’ve run a lot of races there over the years,” said Stone, whose home in Northeast Pennsylvania is about 130 miles from Selinsgrove. “I actually ran there fulltime a couple seasons when I was first starting out (in full-blown dirt Late Model racing), so I know the place pretty well. It gives you some confidence when you go someplace you’ve been to a lot.”

A universally well-liked racer who campaigns primarily family-owned equipment, Stone, 36, has finished as high as fourth (2001) in Selinsgrove’s weekly dirt Late Model points standings. He also owns five career wins at the track, including the 2010 Late Model National Open and this year’s Spring Championship on April 27.

Combine Stone’s Selinsgrove experience with the success he’s enjoyed on the WoO LMS – career totals of two victories and four runner-up finishes, including two bridesmaid runs this season – and it’s clear why he will be a man to watch this weekend.

“I’m really looking forward to going (to Selinsgrove),” said Stone, whose WoO LMS triumphs came on Sept. 2, 2007, at Tri-City Speedway in Franklin, Pa. (driving his family’s No. 21d) and June 29, 2012, at Lernerville Speedway in Sarver, Pa. (piloting the Super Deuce machine owned by Indianapolis’s Leo Milus). “When we won there earlier this year I ran side-by-side with (perennial track champ Jeff) Rine for probably 10 laps at the end. The track was good, real racy, so I expect the fans will see real good racing.

“I think it’s cool what they’re doing with the Outlaw weekend,” he added. “(Promoter) Charlie (Paige) tries to put some good shows on and I hope he gets a lot of support from the racers and the fans. There’s a lot of potential there, so I think if this weekend is successful it could build into a real big annual event.”

Stone will carry some World of Outlaws momentum into Selinsgrove’s action. He’s coming off a very strong showing in the last WoO LMS swing, during which he finished a fast-closing second behind defending champion Darrell Lanigan of Union, Ky., on Aug. 22 at Little Valley (N.Y.) Speedway and placed sixth in the Raye Vest Memorial 50 on Aug. 24 at Winchester (Va.) Speedway. He also recorded a runner-up finish earlier this season, on June 19 at Fonda (N.Y.) Speedway.

“We’ve had a few top-fives with the Outlaws (in 2013) so we’ve had a good year,” said Stone, who has entered 21 WoO LMS events this season and qualified for 11 A-Mains, scoring three top-five and seven top-10 finishes. “It’s all been with this new (Rocket) car. We got it right before (Appalachian Mountain) Speedweek (in early June) and it’s been pretty good almost every time we’ve run it. Even when it doesn’t feel like it’s right, it’s still fast. It still has a lot of speed for some reason.”

Racing with the World of Outlaws is a common occurrence for Stone, who over the past decade has entered 141 tour events. So of course he understands what it takes to beat the traveling standouts.

“It helps when you’re familiar with a track, but you also know those (WoO LMS) guys don’t take long to get up to speed no matter where they go,” said Stone, who has started 82 WoO LMS A-Mains in his career and registered eight top-five and 25 top-10 finishes. “You’re still gonna have to be awful good to beat them. They’re the best in the business.

“It’s like, if you go to a local show and maybe you win your heat, you think, ‘Well, we’re pretty good. So you might be a little conservative with your changes for the feature – and maybe you’ll even win. But when you go race with these (World of Outlaws) guys, there’s no such thing as ‘good enough.’ You’re always thinking about how you can make your car better. Even if you win your heat, you still better change a few things to get better for the feature because those guys all will be.”

MEMORIES: Selinsgrove Speedway is a special place for 2011 WoO LMS champion Rick Eckert. It is, after all, the track where he launched his spectacular dirt Late Model career.

“My first Late Model race was at Selinsgrove,” said Eckert, a life-long resident of York, Pa., about an hour-and-a-half drive south of the track. “It was in ’85. I had been running a Limited (Late Model) class at Lincoln (Speedway in Abbottstown, Pa.) and decided to try a Late Model. I bought an old, used Howe car, and I bought a used motor from (Selinsgrove regular) Steve Campbell and went up there to race Late Models.”

Eckert finished sixth in the 1985 points standings at Selinsgrove – the same year that his sister, Candy, dominated the track’s Street Stock division en route to winning the points championship. He was a regular at the speedway again in 1988, finishing third in the points standings – four spots better than his father Junior, who also raced there weekly.

But after the ’88 campaign, Eckert left Selinsgrove to compete regularly at Lincoln and Bedford (Pa.) Speedway. With his focus soon shifting to touring racing, he would not return to Selinsgrove again until 2009 when he entered the track’s Appalachian Mountain Speedweek event. Since that visit (he did not start the feature due to mechanical trouble) he’s made at least one appearance each year and enjoyed plenty of success, winning the National Open in 2011 and the Fall Classic in ’12 and finishing second in the ’10 Appalachian Mountain Speedweek show.

Eckert, 47, is glad he’s gotten a chance to drop in at Selinsgrove in recent years. The changes he saw in the facility after a two-decade absence were eye-opening.

“They’ve really fixed it up from what it used to be,” Eckert said of the track’s current Charlie Paige-led regime. “They’ve done a great job with the place. I was real impressed the first time I went back there after all those years.”

The racetrack itself, of course, is the pretty much the same speedy half-mile Eckert tackled in the ’80s.

“The racing is intense there,” said Eckert, who has six career wins at Selinsgrove and owns the one-lap Late Model track record of 18.848 seconds (set Oct. 6, 2012). “That place is big, but yet you race it like a short track. It’s just wide-open and aggressive – a big place where you don’t just ever run easy. Even when it gets slippery you run really hard.

“Fifty laps will be a long time around that place, I promise you.”

THE TRAVELERS: Two-time WoO LMS champion and current points leader Josh Richards of Shinnston, W.Va., will lead the tour’s regulars to Selinsgrove, a track at which the 25-year-old superstar has never competed.

Nick Dickson of Lewistown, Pa., is the defending winner of the race and the only other driver to have won it more than once, with a previous victory in 2007.

WEEKEND INFO: After the planned first-ever WoO LMS event at Selinsgrove was rained out last year on Aug. 26, the tour is returning for a two-day blockbuster that ranks as one of the most anticipated and richest motorsports events in the track’s 68-year history.

Complete programs of time trials, heat races, B-Mains and an A-Main will be contested on both Saturday night (Aug. 31) and Sunday evening (Sept. 1).

The speedway’s pro stock division will join the Late Models on Saturday and the Limited Late Models (Steel Block Bandit rules) will share the racing card on Sunday.

Track gates will open at 4 p.m. with qualifying slated to begin at 7 p.m. both nights.

Advance reserved seating and general admission tickets can be purchased by credit card this week by calling the track office at 570-374-2999. The entire covered grandstand will be reserved both nights; season reserved seats will be honored for reserved seat ticketholders.

Free camping will be permitted on the speedway grounds this weekend.

More details on the WoO LMS weekend at Selinsgrove can be obtained by logging on to www.selinsgrovespeedway.com.