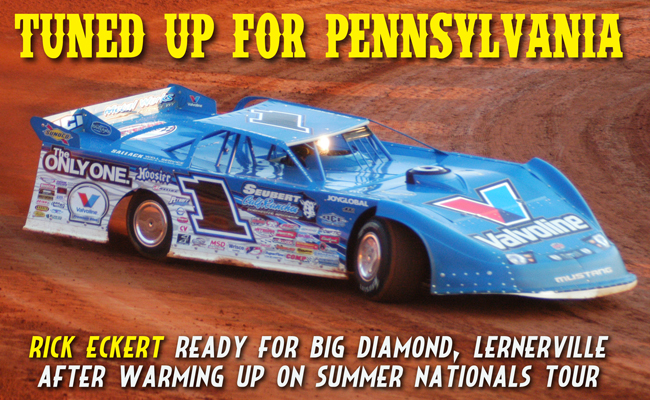 POTTSVILLE, Pa. – June 23, 2014 – The World of Outlaws Late Model Series shifts back into high gear this week beginning on Tuesday night with the series’ return to Big Diamond Speedway for the first time since 2009 in the Diamond Shines 40 followed Thursday through Saturday by the 8th annual Firecracker weekend at Lernerville Speedway in Sarver, Pa.

Current points leader Darrell Lanigan was a Big Diamond winner in 2008 and has a stranglehold on the championship with four wins and 12 top-five finishes in 13 races. Josh Richards was the ’09 event winner, but Rick Eckert is second in points piloting that #1 Rocket car Richards drove to victory. Eckert might be the hottest driver on the circuit as he’s coming off of two DIRTcar Summer Nationals wins last week.

Plus, Eckert, who is seeking his first World of Outlaws Late Model Series win of the season, has some home-cooking working on his side as Big Diamond is only an hour-and-half from his home in York, Pa., where Monday night he’ll be home for the first time in a few weeks.

“It is a busy week, but coming off of last week, it won’t be quite as hard for us because we just did it for a week-and-a-half straight on the DIRTcar Summer Nationals tour,” said Eckert, the 2011 World of Outlaws Late Model Series champion.

Eckert and his Rocket team led by Mark Richards believe they’ve found a winning combination after their recent success with back-to-back wins in Wisconsin at Cedar Lake Speedway and Wilmot Speedway.

“The car we raced last week we decided we were going to run that car this week,” said Eckert as he was heading out of the Rocket Chassis shop.

Knowing the success Josh Richards has had in the car at this week’s venues – in addition to winning at Big Diamond, Richards swept the Firecracker last year – does add pressure to Eckert, but he believes the team is beginning to come together nicely since he climbed in the car in late April.

No matter what happens on the track, one thing Eckert is looking forward to this week is interacting with the fans, especially at the Firecracker’s annual Horseshoe tournament and Kick-It game.

“I like anything involved with the fans,” said Eckert, who admits the only time all year he plays horseshoes is at the Firecracker. “That’s the neat thing about Lernerville, you get to interact with the fans. The diehard fans, by the end of the week you’ve run into them or talked with them at some point.”

On Tuesday at Big Diamond, the pit gates open at 4 p.m. with grandstands opening at 5 p.m. and warmups beginning at 7:30 p.m. General admission tickets are $30, kids 12-and-under are free. For more on Big Diamond, click www.BigDSpeedway.com.