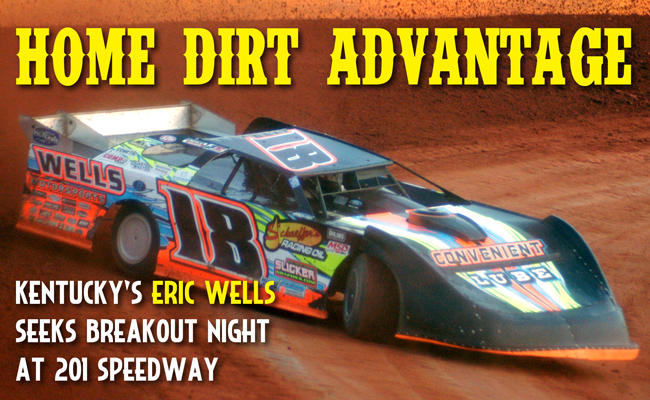 SITKA, Ky. – May 13, 2014 – A busy triple-header weekend of action awaits the stars of the World of Outlaws Late Model Series, with events in Kentucky and Tennessee on three consecutive nights beginning Friday.

The series will make its first visit to the Jarrod Breeding-owned 201 Speedway in Sitka, Ky. on Friday night for a $10,000-to-win showdown. The 3/8-mile 201 Speedway is in its 31st season of competition for the track located in the heart of Eastern Kentucky, and its second full season under the reigns of Breeding and company.

Eric Wells of Hazard, Ky., only an hour away from 201 Speedway, is looking forward to the WoO LMS gang making not only a trip close to his home state but the closest trip the Outlaws make to his Eastern Kentucky home.

“It’s always fun to race locally. Most of our fans including family is from this area and it’s nice when they can come out and support this type of event,” stated the 25-year-old who has one career WoO LMS victory coming last season at Tennessee’s Duck River Raceway park.

Most of Wells’ trips to race with the Outlaws consist of four hours and greater, but 201 Speedway is one track he feels he’s comfortable on.

“I’ve ran over a hundred races at this place since I started racing and this is where I cut my teeth,” exclaimed Wells.

Wells competed in the Spring Nationals Series race that the track hosted in mid-April and got a read on the track’s slick surface during that event.

“It was the slickest I have seen the track. It was different that it usually is,” recalled Wells. “If it’s different when we roll in there this Friday then we’ll go back and look at our notes from before.”

Wells’ crew chief Tommy Hicks, a veteran who spent many years turning the wrenches for Hall-of-Famer Scott Bloomquist, has been a major help in his race program.

“We get along really well,” Wells said. “Him and my dad (team owner David Wells) are really good friends and we’ve all spent a lot of time together. We’re still searching for one more crew member to help but we feel once we get that we’ll be at a point to do some big things.”

After somewhat struggling early in 2014, Wells and team hope to get things turned around soon.

“It’s not been what we wanted,” said Wells about his early season summary. “We’ve had some decent runs at a few tracks too. We’re hopeful in bringing out a new Rocket (Chassis) this weekend to run at 201. We’ve had a lot of success in Rockets in the past. They’ve stepped up their game and I’m excited about running them, it seems to suit my driving style more.”

Wells, the 2013 Rookie of the Year, has enjoyed his run with the Outlaws so far and hopes to continue that good relationship with the series.

“I like the atmosphere. I feel more welcomed by the World of Outlaws,” Wells said. “There’s less pressure running the Outlaws and it’s just a better dirt racing atmosphere.”

This will mark only the sixth appearance by the WoO LMS tour in the World Racing Group’s modern era to the Bluegrass State on Friday Night as the series has raced at Kentucky Lake Motor Speedway, Paducah Raceway, Western Kentucky Speedway and Bluegrass Motor Speedway, but this will mark the first series trip to the Eastern part of the state.

Allen, Ky., driver Brandon Kinzer is looking forward to the Outlaws’ Kentucky visit. Kinzer has not entered a WoO LMS event since April 30, 2011 at Bluegrass Speedway but says the Outlaw event at 201 Speedway is brining excitement to the region. “We’re excited about the event and for Jarrod (Breeding) at 201 who has brought the opportunity of some bigger races to the track,” stated the 36-year-old Kinzer, who drives an MB Customs entry sponsored by Kinzer Drilling Company.

Kinzer won the track’s opening Spring Nationals Series event on April 17th and was a huge momentum booster for the humble Kentucky native. “We’ve ran second so many times with Ray (promoter & racer Ray Cook) it was a very special race to win,” stated Kinzer, who picked up the $4,000 special event victory. The race was dedicated in memory to long-time track prep guru Johnny Salyer, who spent most of his life prepping the track located minutes from Paintsville, Ky. “It was just a very important win to us,” stated an excited Kinzer.

Expected along with the WoO LMS gang include Kentucky standouts Jackie Boggs of Grayson, Victor Lee of Danville, Michael Chilton of Salvisa, Shannon Thornsberry of Martin, Stephen Breeding and Chris Combs both of Isom, Kenneth Howell of Lovely, Paul Davis of Pilgrim, Dustin Linville of Lancaster, along with West Virginia’s father & son duo of Tim & Zack Dohm from Cross Lanes and the Ohio trio of R.J., Rod and J.T. Conley from the Conley Motorsports stable of entries along with many more.

At 201 Speedway on Friday May 16th for the Second Annual “Moonshine Runner 50” the gates will swing open at 3:00 pm with the driver’s meeting scheduled for 6:30 pm and hot laps will roll out shortly after that. The Four Cylinders will also be on the racing card for the evening’s activities gunning for $800-to-win and the Open Wheel Modifieds will race for $700-to-win. Adult general admission is $25.00 while adult pit passes will be $40.00.

A full show of Practice, Ohlins Shocks Qualifying, Heat Races, Last Chance Showdowns and 50-lap mains will be on tap each night for the World of Outlaws Late Model Series competitors.

For the 201, Smoky Mountain and Duck River swings, competing teams will be restricted to using Hoosier 1300, 1350, 1450, 1600 and 55-compound tires or American Racer 44, 48, 53 and 56-compound rubber. All of the tires will be required to punch a minimum ’40’ reading when checked with a durometer. For 201 Speedway only, the Hoosier 1425 compound will be allowed in addition to the above mentioned Hoosier compounds.