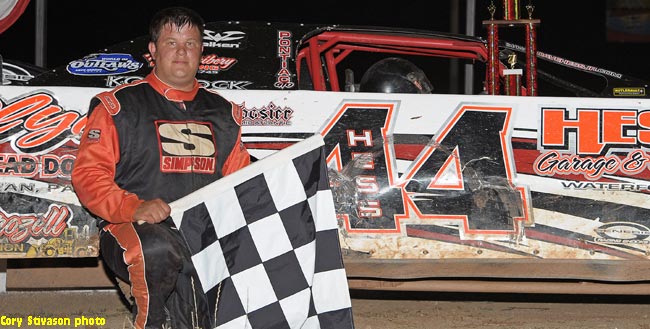 SARVER, PA – June 4, 2012 – By Kevin Kovac/WoO LMS P.R. Director – Losing a chance to win a third straight DIRTcar UMP Late Model championship at Lernerville Speedway due to an early-spring back operation was a tough pill to swallow for Dave Hess Jr.

But fortunately for Hess, he won’t have to miss the four-tenths-mile track’s marquee Firecracker 100 presented by GottaRace.com as well. He’s recovered from surgery and focused on upholding his home track’s honor in the sixth annual $170,000-plus World of Outlaws Late Model Series spectacular, which features three complete nights of racing from June 28-30.

Advance-sale tickets for the Firecracker 100 weekend, which includes full WoO LMS programs topped by 30-lap, $6,000-to-win A-Mains on Thurs., June 28 and Fri., June 29, leading into the $30,000-to-win Firecracker 100 on Sat., June 30, are on sale on-line at www.worldofoutlaws.com/tickets or by calling 724-353-1511. Three-day reserved-seat packages value-priced at $69 – with a free fan pit pass for Thursday and Friday included – have been a hot item for months, while single-day tickets went on sale today (June 4).

“We’re ready for the Firecracker,” said Hess, a 27-year-old talent from Waterford, Pa., about two hours north of Lernerville. “It’s disappointing to not be going after another (Lernerville) championship this year, but at least we still have the Firecracker to look forward to. It’s one of my favorite races of the year.”

Hess underwent Lumbar Microdiscectomy surgery on a herniated disc in his back on April 9. He obviously hated the timing of the procedure – with an estimated recovery time of at least six weeks, he knew he would be out of action just as the 2012 season at his western Pennsylvania area tracks heated up – but the intense pain he had been enduring left him no choice but to take immediate action.

“My back’s been bugging me for a couple years, but after we got home from running the (UMP) Modified in Florida (during February’s UNOH DIRTcar Nationals Presented by Summit Racing Equipment) it got to where I couldn’t move,” said Hess, who was told the herniated disc resulted more from heavy lifting than any on-track action or incidents. “I was down for about a week. Once I was able to at least move a little bit I went and saw some people and they told me I’d need surgery to really take care of it and be right.”

The operation took just a bit over an hour and Hess “could feel the difference” as soon as he woke up in the recovery room. He spent about a week largely off his feet before starting physical therapy, and just shy of six weeks after the surgery he decided he was ready to return to the cockpit. His first night back was May 19 at Stateline Speedway in Busti, N.Y., and he showed no signs of rustiness, rolling to a $1,800 open-wheel Modified victory.

Hess also raced on May 20 at Eriez Speedway in Hammett, Pa., finishing second in both the dirt Late Model and open-wheel Modified features. But he didn’t race over Memorial Day weekend (he attended a friend’s wedding and was rained out at Eriez) and had all three of his scheduled starts last weekend washed out by rain (he did run a heat race at Stateline on Saturday before showers moved in), so with his back pain-free he’s anxious to get rolling.

“I’m feeling better now than I have in the last couple of years,” said the rejuvenated Hess. “I’ll have to get in the best shape I’ve ever been in or I’ll have more problems, so I’m doing a lot of stretching, exercising and walking. I don’t want to go through all this again.”

Hess plans to make his season debut at Lernerville this Friday night (June 8), beginning a stretch of three consecutive weekly-show tune-ups at the speedway. Getting back to the ‘Action Track’ will certainly put him in a good frame of mind.

“I enjoy racing there more than anywhere,” said Hess, who owns 11 career dirt Late Model feature wins at Lernerville. “Just the way they keep the surface – the racing’s always good at that place. You can come from the back and still win a race, which is tough to do at a lot of tracks. Plus the people down there are good and they’re always trying to get us big races to run.”

No full-fender race in the Commonwealth of Pennsylvania is bigger than the Firecracker 100, which has quickly grown into one of the country’s must-see short-track events. It’s a true weekend extravaganza, filled with not only memorable racing but a wide variety of other entertainment, including fireworks, post-race concerts, a huge autograph session, the Ms. Firecracker contest, driver/fan horseshoe and cornhole tournaments and camping camaraderie.

“I’ve been to every Firecracker and I think it’s one of the most fun weekends there is,” said Hess. “The facility is second to none, the racing is great and the atmosphere is always a lot of fun. We come out there every year with like 30 to 50 people, all family and friends, and we have a great time.”

Of course, Hess’s Firecracker 100 weekend will be even more enjoyable if he can make a serious run at victory in the headline extra-distance event. The modest driver downplays the notion that a regional/local standout like him can outrun the nation’s biggest dirt Late Model stars for the Firecracker 100’s $30,000 top prize, but the fact is, his performance record in WoO LMS competition over the past eight years stamps him as the Lernerville racer most likely to make noise in the big show, which has been won by big national names Jimmy Mars of Menomonie, Wis. (2009 and ’11), Scott Bloomquist of Mooresburg, Tenn. (’07), Brian Birkhofer of Muscatine, Iowa (’08) and Shane Clanton of Fayetteville, Ga. (’10).

Hess has entered 49 WoO LMS events and started 30 A-Mains since 2004, compiling three top-five and seven top-10 finishes as well as one fast-time honor, four heat wins and one B-Main victory. He has a career-best World of Outlaws finish of second, on Aug. 31, 2008, at Tri-City Speedway in Franklin, Pa., and also recorded top-five runs in 2005 at Stateline (fourth after leading laps 1-17) and 2006 at Wayne County Speedway in Orrville, Ohio (fifth).

What’s more, Hess has started four of the five Firecracker 100 A-Mains. His personal-best outing of 11th in the inaugural 2007 event still ranks as the top finish by a driver who competes regularly at Lernerville and/or the western Pennsylvania-area circuit.

“I’d love to be the first local guy to win that race, but every year it gets tougher to beat those travelers,” said Hess, who has qualified for one of the four Firecracker 100 preliminary A-Mains that have been contested since the weekend was expanded to three nights in 2010. “Lernerville is a little bit bigger racetrack where they can get their car tuned a little better because of their experience and the technology that’s hard for us to keep up with.

“We’ve had some good runs in heats (during the Firecracker); I remember battling Bloomquist for the lead one year (’07). But then in the feature the track ends up so slick, and that’s a totally different deal to get used to.

“I still think we can win,” he added. “If you hit everything just perfect, I guess anything’s possible. But we have to get up front, that’s for sure. If we can get a good qualifying run and get out front, maybe we’ll have a shot at pulling it off.”

Hess has gained some extra confidence in his chances of pulling off a Firecracker 100 triumph in the wake of the recent epic WoO LMS upset authored by Chris Garnes of Evans, W.Va., who defeated the touring stars in a 50-lap event at his home track, I-77 Raceway Park in Ripley, W.Va., on May 27.

“I was just telling one of my crew guys not too long ago how it’s pretty much impossible for a local guy to win an Outlaw show,” said Hess, who will make his first WoO LMS start of 2012 on June 17 at Eriez Speedway. “Then I saw that Chris Garnes win down in West Virginia, so obviously, it can happen.

“If we could pull it off, it would be great. That’s what we’re there for, so we’ll give it our best shot.”