In the end, it was Brad Sweet, standing in victory Lane. The Kasey Kahne Racing driver suffered a broken ankle less than a day earlier in a terrifying crash in Iowa and turned in what was one of the gutsiest drives in series history. The Jim “JB” Boyd Memorial has had four different winners in each of the last four years. Joey Saldana, who won the inaugural event in 2010, is the only two-time winner to date, while Sweet, Craig Dollansky and Kraig Kinser each have won the race once. To gear up for the Jim “JB” Boyd Memorial Presented by Karavan Trailers at Beaver Dam Raceway, here are some interesting facts and figures.

World of Outlaws at 34 Raceway: By the Numbers

WEST BURLINGTON, Iowa — June 8, 2015 — The World of Outlaws Sprint Car Series has raced four times at 34 Raceway, dating back to 2008 and four different drivers have visited victory lane. The series returns again this year to the three-eighths-mile for a full night of racing on Friday, June 26. Donny Schatz, the six-time and defending series champion, scored his first win at the three-eighths-mile last season, charging from the 10th start spot to take the top spot with just 10 laps remaining. Joey Saldana, who scored his first win of 2015 last week in his home state of Indiana, also has been victorious at 34 Raceway. The event this season will mark the only race of the season in the Eastern Iowa/Western Illinois area for the series. To gear up for the World of Outlaws trip to 34 Raceway, here are some interesting facts and figures.

Read moreWorld of Outlaws at 34 Raceway: By the Numbers

LAKE ODESSA, Mich. (June 24, 2015) – Mother Nature captured the original May 30 date for the NAPA Know How Summer Rumble at I-96 Speedway. But tonight the rescheduled race was completed and went into the history books.

After applying the World of Outlaws qualifying to heat race formula, Joey Saldana’s No. 11 qualifying position placed him on the pole of the second heat. Starting next to Saldana in the Motter Equipment HE&M Saw Beltline Body Shop 71M was his friend Paul McMahan, but make no mistake, when the two were racing for the same patch of dirt, their individual competitive natures prevailed.

INDIANAPOLIS (June 24, 2015) – With summer officially here, the mercury in thermometers all across the country will continue to rise. In World of Outlaws (WoO) Sprint Car Series competition, the arrival of summer traditionally has signaled the time when Tony Stewart-Curb Agajanian Racing’s (TSR) Donny Schatz begins to heat up, but this year the driver of the TSR No. 15 Bad Boy Buggies/Chevrolet Performance J&J and his TSR team have already reached a boiling pace and are in the midst of a five-race winning streak heading to three races this week.

Sides opened the week last Wednesday at Granite City Speedway in Sauk Rapids, Minn., where the World of Outlaws debut had been delayed one day because of weather.

“The first night we got there the track was looking hard and dry,” he said. “Then when it rained we came back the next night and it was so wet. They tilled it up trying to dry it out, but it stayed wet during hot laps. The car was tight so we tried to free it up for qualifying and we got a bit free. When we came back out for our heat race it got wet again.”

HURON, S.D. (June 20, 2015) – The World of Outlaws competitors made their third appearance in slightly more than a week at a track new to the Outlaws tour.  Tonight it was Dakota State Fair Speedway.

A huge crowd was on hand tonight to watch the winged warriors’ inaugural event.

For the second consecutive night and the seventh time this season, Joey Saldana proved his expertise in qualifying, capturing quick time with a 14.593-second lap.

Mother Nature stepped in and rain forced the one day postponement.

Tonight 27 teams came to Granite City to see who would take home the first trophy. 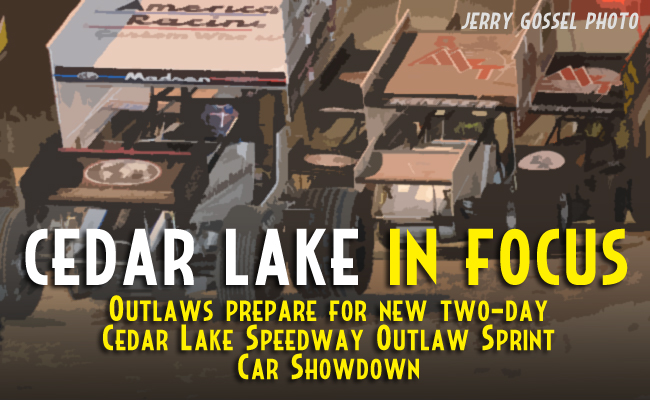 The Showdown will bring back-to-back nights of racing action to the 3/8-mile clay oval in New Richmond, Wis., as the series competes for two $10,000-to-win purses. The new weekend destination event is the culmination of 30 years of Outlaw history at the track. 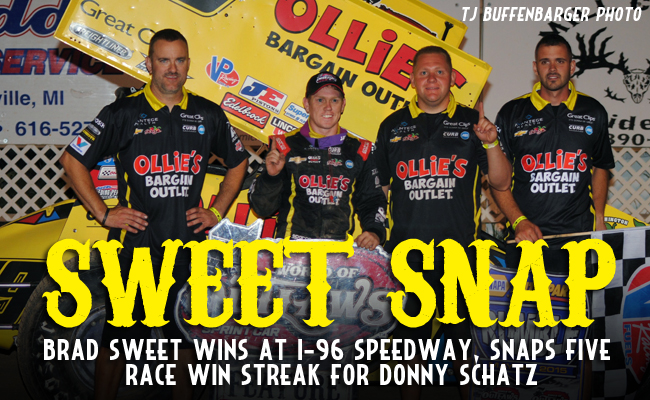 Triple Threat: Brad Sweet Picks up Third Win of the Season in NAPA Rumble in Michigan

LAKE ODESSA, Mich. – June 24, 2015 – Racing on the bullrings of his home state of California early in his career taught Brad Sweet how to negotiate some pretty intimidating cushions. A nearly foot and a half cushion that resembled more a ledge on Wednesday night at I-96 Speedway in Michigan didn’t faze Sweet, nor did a battle with six-time and defending series champion Donny Schatz.

Sweet used a slide job in turns one and two on lap 29 to take the lead from Schatz and withstood a number of late restarts to win the NAPA Auto Parts Rumble in Michigan which marked his third win of the season and first since April. Sweet, who was the final of three leaders on Wednesday night, became the sixth different winner in the last five races for the World of Outlaws at I-96 Speedway.