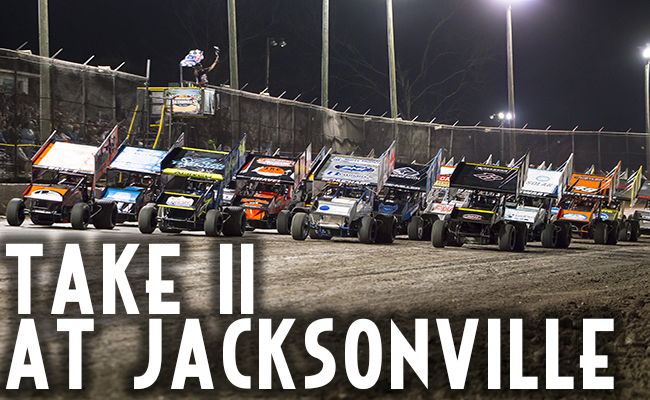 CONCORD, NC – June 20, 2018 – There’s just something about 410-Winged Sprint Cars at a high-banked ¼ mile that gets the blood pumping. The World of Outlaws Craftsman Sprint Car Series will make their third-ever appearance at the always entertaining Jacksonville Speedway in Jacksonville, IL on Wednesday, June 27, after losing the original date back in April to Mother Nature.

The Greatest Show on Dirt has only raced twice ever at the Jacksonville bullring, with both appearances leaving lasting impressions. 2016 saw a whopping 46 cars sign into action with Indiana resident Joey Saldana coming out on top.

Saldana, who is one of only seven drivers in the history of the World of Outlaws history to eclipse 100+ Feature victories, has found a solid home in 2018 with Rudeen Racing and will look to find his way back to Victory Lane at Jacksonville once again.

“I love coming to Jacksonville. It’s a fun place and the World of Outlaws don’t come to Illinois and Indiana very often, so when there’s a race only three hours from my house and shop, it’s great,” the Brownsburg, IN native said with a smile.

The inaugural Outlaws visit to Jacksonville in 2014 saw a young Oklahoma native by the name of Christopher Bell score his first career World of Outlaws victory. Bell, of course, has taken the NASCAR scene by storm, dominating the NASCAR Truck Series last year en route to claiming the championship. Bell, who remains heavily involved in the dirt track scene, now pilots a Joe Gibbs Racing entry in the NASCAR Xfinity series and while he won’t be on-hand to claim another Jacksonville victory, you can guarantee he will be watching live on DIRTVision.com.

With all signs pointing to an already exciting program, the Outlaws visit to Jacksonville will be different in 2018 for another reason. In years past, the purse was smaller and only paid $6,000 to win, this year the event will be a standard World of Outlaws Craftsman Sprint Car Series purse with $10,000 going to the winner, making it the largest paying event in Jacksonville Speedway history.

Tickets for The Greatest Show on Dirt’s invasion of the Jacksonville Speedway are available here. If you can’t make it to the track, be sure to watch all the action LIVE on DIRTVision.com. Following the bullring date at Jacksonville, the Series will tackle the wide, racey 1/2 mile of Knoxville Raceway Friday, June 29 and Saturday, June 30 with the Brownell’s Big Guns Bash.