World of Outlaws Debut at FALS Closes Out Month of May 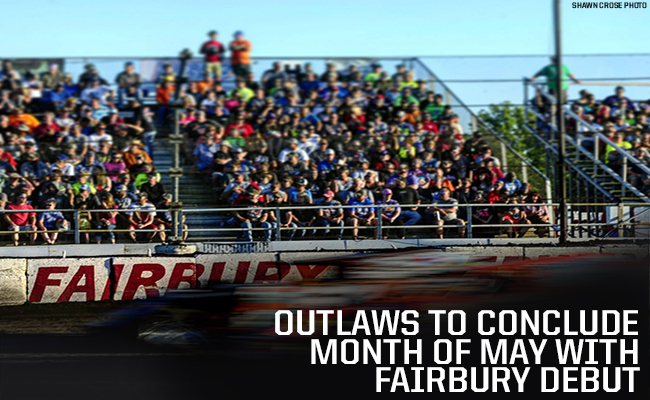 World of Outlaws Debut at FALS Closes Out Month of May

CONCORD, NC – May 17, 2018 – As the World of Outlaws Craftsman Sprint Car Series reaches the busiest time of its 40th Anniversary Season, one event that continues to generate interest is the inaugural visit to Fairbury American Legion Speedway (FALS) on Wednesday, May 30 in Fairbury, IL.

FALS, voted three-time DIRTcar Track of the Year, is a top-notch ¼-mile track that annually hosts one of the biggest World of Outlaws Craftsman Late Models events – the $30,000-to-win Prairie Dirt Classic. “We have wanted to bring the World of Outlaws Craftsman Sprint Cars to FALS for a long-time now,” said Late Model Series Director Matt Curl, who served as track promoter prior to joining the World of Outlaws. “FALS has had a ton of success with the Late Models, and what better way to add excitement than by bringing in The Greatest Show on Dirt.”

Also on board for the Series debut is a new title sponsor. The FVP Platinum Battery Showdown is the third of five FVP events on the Series schedule this season — all of them at premier racing facilities, like FALS, but this is the only debut.

“As a longtime supporter of World of Outlaws racing, and dirt track racing in general, FVP is excited to be a part of something new,” said FVP Senior Brand Manager Amber Misunas. “FALS is an excellent facility, and the racing is as good as anywhere in the country. Combine that with the best Sprint Car drivers in the country and you’ve got the kind of quality and performance we believe in.”

Curl reiterated that thought: “Fans put faith in Fairbury to provide them with a great on-track product. The track will be in good condition, and they will let the best drivers and teams in the business put on a show. Everyone at FALS is really looking forward to the World of Outlaws Sprint Cars’ first visit.”

A strong field of cars is expected as no other racing will be going on in the immediate area on May 30. Expect to see a handful of Knoxville Raceway regulars, MOWA and IRA Sprint Car drivers and of course, the 15 World of Outlaws regulars to compete for the $10,000 top prize. Reserved tickets for the FVP Platinum Battery Showdown are still available. Be sure to reserve your seat today before it’s too late.

If you can’t make it to the track, tune in LIVE to DIRTVision.com for every lap around the bullring. Following the Outlaws’ trip to FALS, the Series competes in Michigan and Wisconsin before heading to Minnesota for the 40th Annual AGCO Jackson Nationals in Jackson, MN.