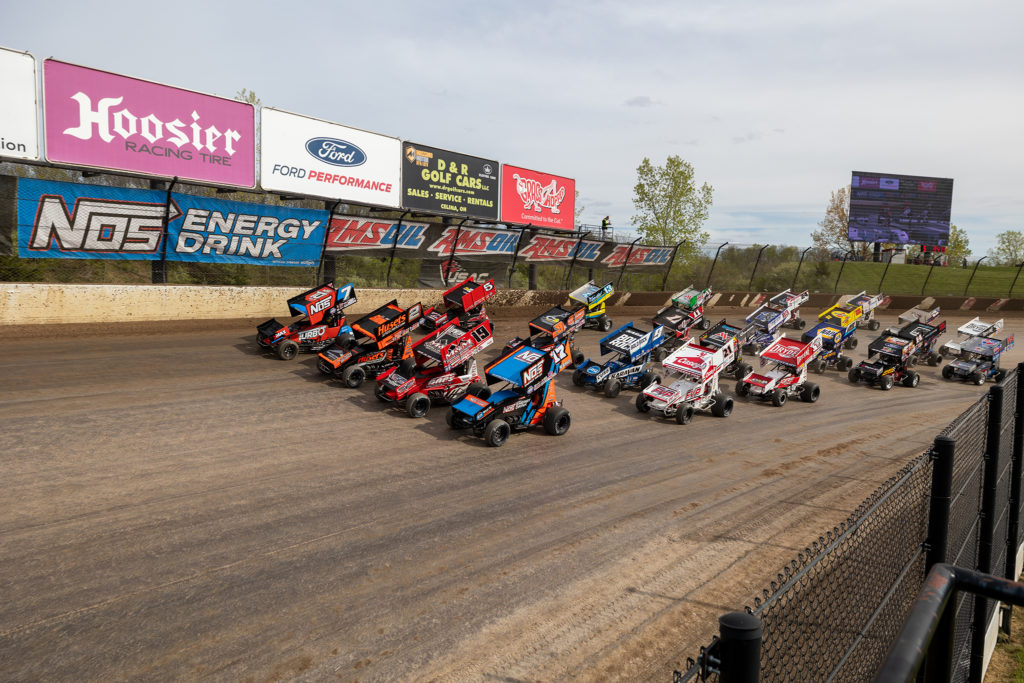 The time has finally arrived. It’s the richest Month of Money in the history of the World of Outlaws NOS Energy Drink Sprint Car Series.

It’s so big that not even one Kings Royal will suffice, that’s why we’re offering up TWO different $175,000 paydays at Eldora Speedway this week. Fans can BUY TICKETS HERE.

In all, fans of The Greatest Show on Dirt will witness five-straight nights of high-horsepower action throughout the state of Ohio. Before the Kings Royal ceremonies commence, we honor a living legend with the Brad Doty Classic on Tuesday night at Attica Raceway Park. Tickets for the mid-week special are sold HERE.

A two-hour trip down the road will lead racers and fans to Rossburg, OH, where “The Big E” crowns two Kings on Thursday and Saturday.

Here’s a quick list of some of the biggest storylines this week:

A LIVING LEGEND: Tuesday’s race at Attica Raceway Park is all about honoring Brad Doty. The Apple Creek, OH native is a 2001 National Sprint Car Hall of Fame Inductee, and his resume would be miles longer had it not been for a devastating back injury that removed him from the seat at the 1988 Kings Royal.

Doty collected 73 checkered flags throughout his career, 18 of them in a shortened World of Outlaws career, which is still good enough for 30th All-Time. Since his accident 33 years ago, Doty has remained a passionate Sprint Car enthusiast and gives back to the sport in every fashion imaginable. From his duties as television color commentator to a magazine columnist to a co-promoter of his own race, Brad still finds a way to make a lasting impact on the sport he loves. On Tuesday, we salute him.

DEFENDING THE THRONE: Leading the charge into Eldora is reigning King Brad XXXVII. Sweet enters the week on a three-race winning streak aboard the Kasey Kahne Racing, NAPA Auto Parts #49. On the year, they’ve collected 13 Feature wins and currently own their biggest margin yet in the pursuit of a third-straight World of Outlaws championship.

On Saturday night when the 37th edition is held, Sweet will have the chance to join Donny Schatz as the only back-to-back winners in event history. Another win would also make him a three-time King (2013 & 2019) alongside the likes of Steve Kinser (7 crowns), Donny Schatz (5 crowns), Sammy Swindell (3 crowns), and Jac Haudenschild (3 crowns).

To successfully defend the throne, The Big Cat will have to step up his game considering his struggles at Eldora in May. With finishes of 11th and 14th, two of his seven results outside of the top-10 came at this track.

CHASING ANOTHER CROWN: Along with Sweet, an additional six former Kings Royal champions have confirmed their attendance with another inauguration in mind:

REDEMPTION RUN: At the last running of the 36th Kings Royal in 2019, Logan Schuchart offered an unforgettable, yet heartbreaking ride. In only 10 laps, the Hanover, PA native romped from 12th-to-1st, flying by the likes of Sweet, Schatz, Swindell, Gravel, Haudenschild, Madsen, Reutzel, and more. He ensued to lead the next 15 laps until the caution flew on Lap 25, which was ultimately his downfall. A stumble on the restart allowed Sweet to ride by and run off, forcing Schuchart to settle for second at $20,000 instead of the $175,000 grand prize.

With two chances this week at the title, Schuchart is hungry for some vengeance. The Shark Racing, Drydene Performance Products #1S has already racked up three World of Outlaws wins this year, including the $50,000 Jackson Nationals title. Combined with grandfather Bobby Allen (8), great-uncle Joey Allen (4), and uncle Jacob Allen (1), Schuchart’s (3) gives their royal family a combined 13 starts at this event. However, a breakthrough win would be the first crowning at Eldora for the Hanover Gang.

NEXT GENERATION: The Kinser cousins (Steve & Mark) and Blaney brothers (Dave & Dale) have each reached the grand stage of Kings Royal, however, no father-son duo has ever topped the event. This week, World of Outlaws regulars Sheldon Haudenschild and Kraig Kinser will have a chance to change that record.

Haudenschild (son of King Jac XV) will race alongside his father for the final time at the famed event, as “The Wild Child” continues his farewell tour. Sheldon enters as the most recent winner at Eldora, scoring his first win at the track in May. In 2018, he qualified for his third Kings Royal A-Main and piloted the Stenhouse Jr. Marshall Racing, NOS Energy Drink #17 to a career-best of fourth.

Kinser (son of King Steve XXVII) chases his 10th Kings Royal A-Main appearance aboard the #11K owned by his National Sprint Car Hall of Fame father. In nine previous starts, Kraig has racked up six top-1o finishes and a career-best of fifth, which he matched at the 35th running in 2018.

The five-time World of Outlaws winner will drive the Swindell SpeedLab #39 at both races. He’s trying to join Kyle Larson and Tony Stewart as the only racers in history to win a NASCAR Cup Series race and World of Outlaws Feature in the same season.

ELDORA INVERT: The Kings Royal format is unlike anything else Sprint Car drivers encounter all year long. Wednesday’s Jokers Wild and Friday’s The Knight Before will run as standard World of Outlaws programs, however, Thursday’s 38th Kings Royal and Saturday’s 37th Kings Royal are a whole different show.

Qualifying is still a mainstay, but everyone goes under one group. More importantly, a huge 36-car inversion flips the Heat Race lineups and puts the fastest cars to mid-pack. Only the top-three finishers transfer to the Kings Royal A-Main, lining up spots 1-18 in a special fashion with Heat Six winner taking the pole. The fastest two qualifiers that do not transfers are guaranteed starting spots 19-20. The Last Chance Showdown will throw four more names into the ring for the 40-lap Feature.

ALL STAR INVASION: With big money, an actual crown, and all of the prestige on the line, Kings Royal week has the tendency to bring in some of the best invaders in the country to face the full-time Outlaws.

The All Star Circuit of Champions continent is represented by guys like Tyler Courtney in the Clauson-Marshall #7BC, Justin Peck in the Tom Buch #13, Cory Eliason in the Rudeen #26, Hunter Schuerenberg in the Vermeer #55, Zeb Wise in the Wise-Priddy #10, Spencer Bayston in the McGhee #11, Paul McMahan in the CJB #5, and several other worthy contenders.

There’s also the likes of Pennsylvania natives Danny Dietrich in his potent #48 and Anthony Macri aligning with the Indy Race Parts #71. Another foursome including Brent Marks, Giovanni Scelzi, Brian Brown and Sam Hafertepe Jr. will be there and have all ran podium against the Outlaws this year.

ON THE CUSP: Over the last 10 years, seven different drivers have led laps at the Kings Royal, but have yet to experience their own inauguration. That list includes Logan Schuchart as mentioned, as well as Brian Brown, Cole Duncan, Trey Starks, Tim Shaffer, Paul McMahan, but most notably David Gravel.

The Watertown, CT native led 10 laps in 2014 before slipping back to finish a career-best third. His seven consecutive Kings Royal A-Main appearances are highlighted by a 9.5 average finish with four top-10s to his credit. Gravel and the Big Game Motorsports #2 have the advantage of being one of the fastest cars on 1/2-miles this year, proven by their sweep of the Bristol Throwdown.

Much like Schatz in 2007, Gravel has won almost every Crown Jewel imaginable, except this one. This could be the year he is finally crowned King David.

FIRST TIME EVER: Two full-time World of Outlaws competitors are chasing their first-career A-Main appearance at the Kings Royal – Carson Macedo and Wayne Johnson. For Macedo, he sits third in World of Outlaws points in his first season driving the Jason Johnson Racing #41. Crew Chief Philip Dietz has reliable experience at the event, guiding Jason Johnson to second in 2015 and David Gravel to fifth in 2019.

ATTICA ACES: Only two full-time World of Outlaws drivers own Series Feature wins at the Attica 1/3-mile – them being Donny Schatz and David Gravel. Schatz is a four-time winner at the track and a four-time Brad Doty Classic champion. Gravel is the most recent victor, beating Schatz for his second Attica win after capitalizing on Haudenschild’s misfortune in May’s Kistler Engines Classic.

MONTH OF MONEY: Kings Royal week is the official kickoff to the 2021 Month of Money. This 30-day span features 15 World of Outlaws Sprint Car Series races with the three highest paydays of the season (all over $150K) and another three in excess of $20K.

Around the Turn: After this week in Ohio, the World of Outlaws NOS Energy Drink Sprint Car Series travels back to the state of Pennsylvania for mid-season match with the PA Posse. The Don Martin Memorial Silver Cup awards $25,000/Win on Tuesday, July 20 at Lernerville Speedway, followed by a doubleheader at Williams Grove Speedway capped by the $20,000/Win Summer Nationals on Friday-Saturday, July 23-24.