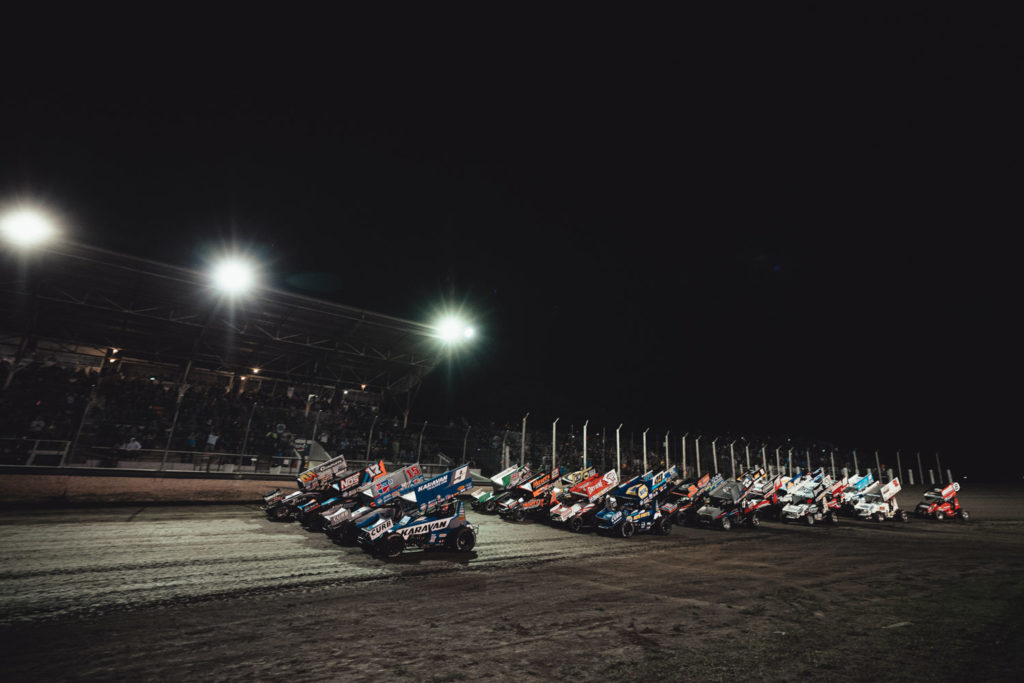 A thrilling Memorial Day Weekend is in the books, and now the summer slate begins for the World of Outlaws NOS Energy Drink Sprint Car Series. The nine-race schedule in June starts this weekend with a doubleheader taking The Greatest Show on Dirt to North Dakota and South Dakota for one night each.

10-time Series champion Donny Schatz leads the charge to River Cities Speedway in Grand Forks, ND on Friday, June 3, where he’ll look to continue his otherworldly dominance with a potential 13th win in 28 tries at his home track. Among the top contenders to stop him is reigning River Cities master and defending Series champion Brad Sweet, who like Schatz, eyes his second win of the season this week.

A rest day on Saturday leads into Sunday, June 5 when Huset’s Speedway in Brandon, SD takes center stage for the first time since a severe storm damaged the facility earlier this week. Workers have quickly been cleaning and preparing the facility with David Gravel, a two-time winner at the track last year, looking to deliver another W on home turf for his car owner, Tod Quiring.

They’ll all have to deal with Sheldon Haudenschild, who enters as the hottest driver on tour with three wins in the last four races aboard his Stenhouse Jr. / Marshall Racing, NOS Energy Drink #17. Beyond the full-time stars, there’s a heap of local and regional drivers aiming to take down the greatest Sprint Car drivers in the world this weekend.

NOT BACKING DOWN: The racing world woke up to some heartbreaking images from Huset’s Speedway on Monday morning when a severe storm wreaked havoc on the state-of-the-art facility in Brandon, SD. Extreme winds ripped apart the suites and scoring tower, but thankfully nobody was injured in the storm. Track owner Tod Quiring insisted in less than 12 hours that Huset’s would be ready to host the World of Outlaws this Sunday night, and a group of 20+ workers immediately went to work on cleaning up and repairing the damage.

@BESTDIRTTRACK: It’s @RiverCitiesND on Twitter nowadays, but the diehard fans remember when the Grand Forks, ND oval went by the handle of @BestDirtTrack. It was a name rightfully earned as one of the most thrilling venues in all of Sprint Car racing, in fact, it’s Johnny Gibson’s #1 all-time favorite dirt track. The track has consistently produced sensational shows over the years including Donny Schatz vs. Steve Kinser in 2011, Kyle Larson vs. Logan Schuchart in 2020, and Brad Sweet vs. Sheldon Haudenschild in 2021.

HOT-ENSCHILD: There’s no denying that Sheldon Haudenschild and Stenhouse Jr. / Marshall Racing is the hottest team on tour right now. Over the last five races, the NOS Energy Drink #17 has won at Bridgeport, Atomic & Lawrenceburg, averaging a 1.8 finish with their worst result being a fourth-place run at Attica. In that same span, the Wooster, OH native has risen from fourth in points (-92) all the way up to second (-34) as Sweet’s closest championship contender.

The 28-year-old son of “The Wild Child” has ample opportunity to keep the streak alive this weekend at River Cities and Huset’s. He rides four-straight top-10 results at the Grand Forks, ND track with a career-best of second coming last year, while he’s also a former winner at the Brandon, SD oval on tap for Sunday night.

HUSET’S HOME GAME: Welcoming the World of Outlaws to Huset’s Speedway means welcoming home his own Big Game Motorsports team for track owner Tod Quiring. Last year was proof that David Gravel and crew chief Cody Jacobs thrive with the pressure turned on as Gravel scored each of his three career Huset’s Speedway wins in 2021, two of them coming with The Greatest Show on Dirt.

Entering the weekend, the Watertown, CT native sits third in the championship standings (-46 PTS) with two victories and 19 top-10 finishes to his credit. Sunday’s showdown at the Brandon, SD facility is extra special as the track bounces back from a severe storm and hosts the only tune-up for the inaugural $100,000-to-win High Bank Nationals on June 23-25.

DEFENDING THE DAKOTAS: When it comes to defending their home turf, nobody does it quite like 10-time World of Outlaws champion Donny Schatz does in his native North Dakota. On Friday, the Series makes the first of two visits at River Cities Speedway in Grand Forks, where Schatz has dominated since the Outlaws debuted at the 1/4-mile bullring in 2007.

In 27 starts over 15 seasons, the Tony Stewart/Curb-Agajanian Racing superstar has produced some out-of-this-world numbers at his home track. He owns 12 victories (44% winning percentage) and his only finish outside the top-five was a seventh-place run, resulting in an astounding 2.4 average finish. He’ll head to River Cities this Friday night chasing his second win of the 2022 World of Outlaws season and an improvement on his sixth-place mark in the championship standings.

CHANGE OF PACE: It’s been eight long races back to late April since Brad Sweet last finished on the podium at a World of Outlaws race, his longest such streak since missing the top three over nine-straight races to end the 2021 season. The Kasey Kahne Racing, NAPA Auto Parts #49 hasn’t been bad by any means, rather consistently good, but not the great we’re used to seeing from the blue beast.

The three-time and defending Series champion still holds the current championship lead in pursuit of a fourth title, but The Big Cat has only managed one trip to victory lane through 23 starts this year, whereas last year he recorded nine wins at this point. The Grass Valley, CA native is a former winner at both River Cities and Huset’s, where he can break the streak and return to the podium, let alone victory lane, this weekend.

WAITING TO BITE: Since building a new Triple-X Chassis prior to the Bristol Bash at the end of April, Logan Schuchart and Shark Racing have completely turned their season around. With nine top-five results and a 4.4 average finish over the last 11 races, the Hanover, PA native has returned to the championship-contending status fans remember from the #1S from 2020.

As great as the podium visits and strong runs are, nothing quite compares to the jubilation of victory lane. The DuraMAX Oil, Team Drydene entry has contended for three straight wins at Attica, Atomic & Lawrenceburg, but fallen short each time and leaving Bobby Allen’s boys hungry for that checkered flag. That return could finally come this Friday night at River Cities, a place Schuchart has shined at in recent years.

TO THE HALL: With a rare Saturday night off, several World of Outlaws affiliated members will be heading to Knoxville, Iowa for a special occasion as the 2022 class of inductees will be enshrined into the National Sprint Car Hall of Fame.

Series announcer John Gibson, who has called more than 2,000 consecutive World of Outlaws races since grabbing the mic in the mid ’90s, will be joined by legendary car owners Tony Stewart & Dennis Roth, along with noteworthy drivers including 12-time winner Tim Green and five-time winner Gary Wright.