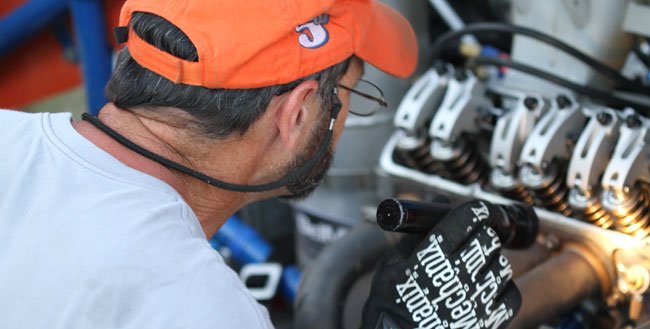 Each week throughout the season we will provide a Q&A with a team member within the World of Outlaws Sprint Car Series. This week we chose Randy Wolfe, who is the crew chief and father to Lucas Wolfe.

Background: Randy raced sprint cars from 1976-99, winning a variety of races and claiming the Port Royal Speedway championship in 1982. He gave up his seat when he saw the potential in his son, Lucas, whom he has crewed for since the beginning.

How have you seen the sport change since you’ve been a part of it?

“I came through the era when there were engines rules in Pennsylvania, they were 312s. And then we went through a period when there were no rules, we ran big-block Chevys. And then they started to have aluminum 430 engines with weights on them, and then no weights. And then we ran cast-iron engines that were 410 and we finally settled into the engine we have today, which is 410 cubic inches and aluminum blocks. That finally settled down around the late ‘80s I think, which is probably a good thing because at least it’s been consistent. It was crazy when we’d have something different every year.”

How different is it to crew chief for your son versus a random driver?

“I think that’s why I do it because I want to help him. I did a little bit with Todd Shaffer there when Lucas was off running with Sonny (Kratzer). I think I do this because of (Lucas), not really because I want to do this as a crew chief. Although I really do like it, so I don’t know what would happen if we would ever part.” 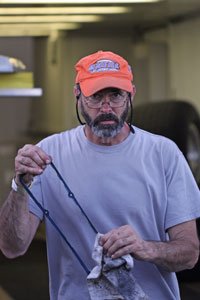 What is the best part of being a crew chief?

“Out here these guys are all pretty cool. It’s just a neat group. Everybody is kind of fighting the same fight and doing the same things. I really enjoy it. I guess that’s what I like – the people and being at different tracks all the time. It’s really hard to do, so if you do have any success it’s pretty rewarding.”

Where do you think Lucas fits into making sprint car racing a career?

“I think out here it takes someone – like if they raced on a local level and did well and they came out here – I think it’s a five-year plan. I don’t think you’re going to have any great success until that. So it’s kind of like going to college. We’re on our fifth year, so I’m hoping things turn around.

“And it’s not all driving. One thing I think is a disadvantage with the kids today is the schedule is not near as big as it once was. When a lot of these guys came up they would go to certain tracks three, four, maybe five times a year. So the way I look at that, it’s going to take a young guy even longer to learn it because he’s not going to go to Knoxville six times a year; he’s going to go two. So that’s what makes it even harder in my opinion.”

Where have you seen Lucas progress the most?

“What I see this year is I see there’s a lot of nights my car isn’t very good and he gets the most out of it. In other words, he’s always digging, always trying, and I think that will bode well when we finally get rolling. In all honesty, I think it’s just the experience of knowing what to do and when to do it because you’ve been in so many different situations and you learn by that. I just see him do things on the race track that impress me and it might not be for winning the race, but it’s just certain times throughout the night that he makes the right moves or if the car isn’t right that he gets the most out of it.”

How close are you guys to picking up that first World of Outlaws win?

“It’s making the most of a particular night, meaning that you go out the right time to time trial, you get an up-front start in the dash … and then you start in the front of the main and you don’t get a flat left rear tire like we’ve done before and other things don’t happen. I really think it’s circumstance.”

What is one thing about Lucas the average fan doesn’t get to see?

“He’s really good around the race car. He’s really a good mechanic. I think a lot of these guys that drive these cars are really in tune with their cars and he is that. So that also makes me really proud because that’s the way that I did it, too. I was involved with my cars and turned wrenches and made parts and fabricated things, and he does all that. So I really like seeing him do that stuff.”

For more information about Randy and Lucas Wolfe, visit LucasWolfe.com. For more on the World of Outlaws, click WorldofOutlaws.com.