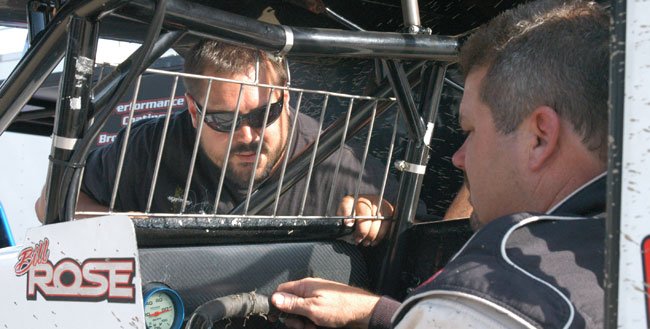 Throughout the season we will provide Q&As with team members within the World of Outlaws Sprint Car Series. This week we chose Josh Hill, who is the only full-time crew member for Bill Rose.

Background: Josh has been passionate about racing since he was a youngster. He began crewing for various Ohio teams around the age of 15 and he later raced 305 sprint cars for seven years in Northwest Ohio. This is his first year of being on the road and working on the World of Outlaws circuit.

What has been your racing experience to get you to this point?

“I drove from 2001-07 before I had my daughter. Before that, since I was 15, I’ve been helping on cars, trying to learn the trade. This is all I’ve ever wanted to do since I was probably 10 years old. Bill gave me the opportunity to come out here and learn a little bit and see what it’s like to be on the road.”

What is your dream to capture out of this deal?

“The only dream I had since I was 10 was to come and work with the World of Outlaws. Bill gave me a great opportunity and in between there I actually got to drive a sprint car. That was a little plus. Being out here now … I’d love to do it full time. I have a ball with what we’re doing right now. I’d just love to continue doing it.” 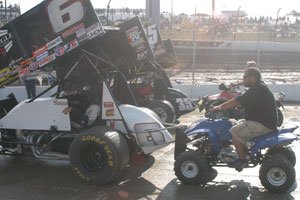 What are your responsibilities on the team?

“My responsibilities are not really limited to anything. From walking the dog to making sure Bill gets what he needs, servicing and maintenancing the car, changing motors, putting cars together and making sure everything is in order. Pretty much from the ground to the top, we both do it all.”

How much time do you get to spend with your two young children?

“It’s tough. Bill tries to get home as much as possible and I get everything done that needs to be done service-wise with the cars and stuff, and then I get to go home. It’s like a five-hour drive. It’s not awful bad, but it’s worth whatever time I get to go home and spend with them.

“It grows on you to want to do it. I tried to stay away from it after I had my daughter and it just doesn’t work out that way. Once you have the racing blood in you, it stays with you.”

What is an area that you are trying to learn as a crew member?

“Setup-wise, it’s the communication between me and Bill on how the car works. It’s just totally different from what I drove. Moving into the 410s, there’s a lot more horsepower, the cars do a lot more different things, you’ve got more speed and you’re running on a lot bigger tracks, so I’d just like to learn what the car does and how it handles on bigger tracks.”

How difficult is it being the only full-time crew member for the team?

“It’s tough. I love racing; I enjoy it. I’ll do whatever it takes. We make do with what we have and we have a good time if we’re running bad or we’re running good. I just enjoy being out here, being with the Outlaws and around sprint cars.”

For more information about Josh and Bill Rose, visit BillRoseRacing.com. For more on the World of Outlaws, click WorldofOutlaws.com.