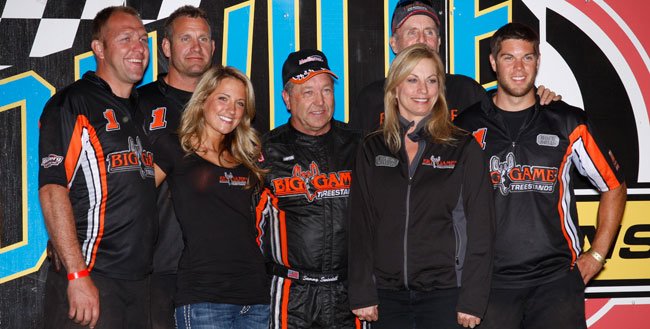 Each week throughout the season we will provide a Q&A with a team member within the World of Outlaws Sprint Car Series. This week we chose Amy Swindell – wife of three-time Outlaws champion Sammy Swindell.

Background: Amy has been married to Hall of Fame driver Sammy Swindell for almost a quarter century and she has been on the road for more than 30 years. Amy is also the mother to sprint car driver Kevin Swindell, who is working on establishing a career in NASCAR.

How long have you and Sammy been married?

“Good question. I’ll have to add … 24 years this year. So we’ve been married 23 years. That’s just a small part of it because we’ve been together since I was 15 and he was 17. So we’ve got another 15 years on top of that probably.

“He was at one school and I was at another. My dad raced. His dad raced. Our families have known each other all our lives. We started dating when I was 15. So it’s been a long time.”

How much of that time have you spent on the road?

“I probably started going with him when I was 21 or 22. It was probably the year he started running for Mr. Nance, which would have been the end of 1980 – ’81 and ‘82 when he won the first two (World of Outlaws) championships. The first year probably ’81 and he won the championship that year, so maybe he thought I was his good luck charm. I’ve been with him all the time since then.”

What do you do on the average race day?

“This year we have our own t-shirt trailer, which we’ve never had all these years. We shared with (Craig) Dollansky last year and kind of got our feet wet. I’ve always just sold out of the trailers. So this will be sort of new for us this year and we’re looking forward to that. And just a lot of support; just being there with him, giving him somebody who’s there. That makes a big difference for him.” 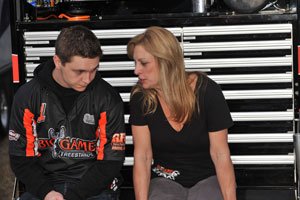 How have you juggled Sammy and Kevin racing as much as they do?

“We’ve done a lot of sharing, especially Kevin doing the stock car stuff. I’ve tried to go when Sammy couldn’t or we’ve both gone when we can. We try to be there for him so that he has family support, too, especially at the NASCAR stuff that he’s doing. Sammy is very supportive about that. We just kind of split the time up a little bit.

“The last two weeks he’s helped us because one of our crew guys had to be away for a couple of weeks. So we bring Kevin in if he needs to help his dad and it all works out good for everybody.”

What’s been the biggest change that you’ve seen in your life on the road?

“Well when we started you were in a dually pickup with an open trailer or if you were lucky you had a closed-in trailer. Ted (Johnson) used to schedule the races so close together that it seemed all we did was just drive, just constant, getting from one place to the next.

“I laugh now because some of them will complain about motorhome this or whatever, and I’m like, ‘They should have done it back in the ‘80s.’ You were in a pickup and all you had was an AM/FM radio in the truck. You didn’t have cell phones. I sound so old. You’d put eight-track tapes in the players because you’d lose radio service and down the road you’d go. You raced, you went to the car wash, you slept when you could and you went to the next place.

“We didn’t really mind. We were young and loved it and we just did it. You just didn’t think about it then. You just got in the truck and went.”

What is your favorite thing about traveling the country?

“We’ve just got friends all over the country. We don’t have that many close friends at home. It seems like all of our friends are out somewhere across the country. We just don’t get to spend a lot of time with them. That’s really the best part I guess.”

What is one thing you’d like the fans to know about Sammy?

“This guy is the funniest man you’ll ever meet. Honestly. It may be a dry sense of humor … but he is the funniest guy you’ll ever meet. It’s just off-the-wall, crazy stuff and he always has some silly comment about something. And you’d never think that in a million years if you saw him at the race track because he’s all business; he just wants to race and get his job done at the race track, but he is a crack up. That’s something I don’t think people would ever realize.”

For more information about Amy, Sammy and the team, visit www.swindellmotorsports.citymaker.com. For more on the World of Outlaws, click WorldofOutlaws.com.

If you have a question for a team member within the World of Outlaws Sprint Car Series, e-mail Public Relations Coordinator Shawn Miller at smiller@dirtcar.com with the person’s name and a question or two. We will do our best to provide inside access from as many people as possible during the 2012 season.