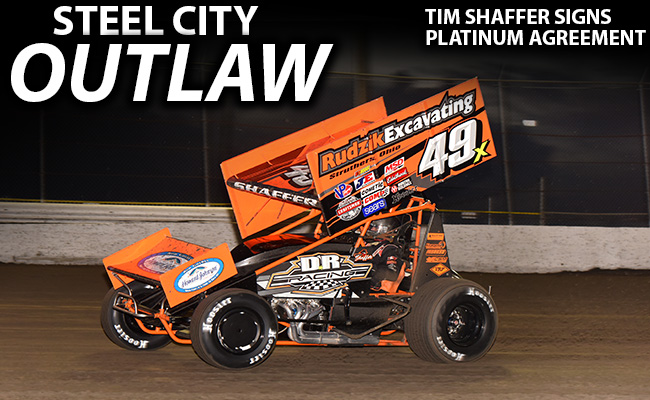 CONCORD, NC – March 4, 2018 – The World of Outlaws Craftsman Sprint Car Series is thrilled to announce that The Steel City Outlaw Tim Shaffer and car owner Jeff Rudzik have signed on as full-time Outlaws for the 2018 40th Anniversary Season in the familiar No.49X machine.

Shaffer has been a staple with The Greatest Show on Dirt since scoring his first career victory 20 years ago in Elma, WA at Grays Harbor Raceway in 1998. A year later, Tim Shaffer was crowned the 1999 Kevin Gobrecht Rookie of the Year with the World of Outlaws before spending the better part of the next decade as a Series regular.

“We feel extremely competitive and I don’t how many years left I have doing this. Most importantly, I am enjoying myself out here,” Shaffer, who scored two Outlaw wins in 2017, cited as his main reason for joining the Outlaws full-time. “I work really with Cody Jacobs as my crew chief and we have had a lot of speed, while also enjoying ourselves,” Shaffer added with a smile.

Shaffer will land in the Sprint Car Hall of Fame when he chooses to retire on the strength of his 25 Outlaw wins, 60 All-Star Circuit of Champion triumphs, hundreds of regional victories and, of course, his unforgettable 2010 Knoxville Nationals Championship.

“I was on the road for about 10 years and I bet it has been about 10 years since I was last out here. I absolutely love it,” the Aliquippa, PA native said.

During those 10 years when Shaffer was not a full-time Outlaw, he re-established himself as a dominant force in Pennsylvania and Ohio amidst capturing four consecutive All-Star Championships.

Shaffer’s addition brings the current total of full-time Outlaws to a whopping 19 as they head West for California. Tim Shaffer left us with this parting thought, “This is really exciting. I feel at home again.”

Catch Shaffer and the rest of the World of Outlaws Craftsman Sprint Car Series next at Thunderbowl Raceway in Tulare, CA March 9 and 10. As always, if you can’t make it to the track, you can watch all the action live on DIRTVision.com.