Sweet Takes On Year Two As a Promoter 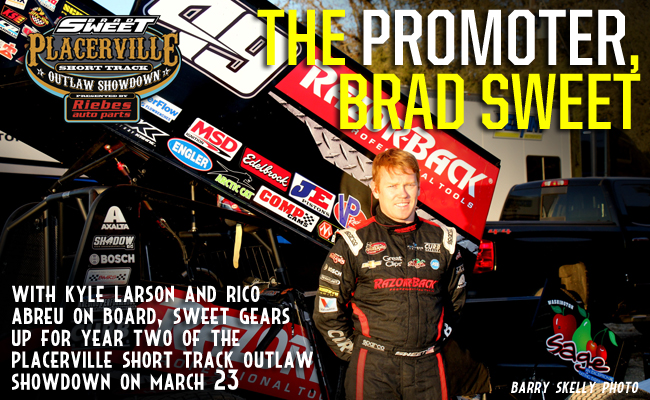 Brad Sweet Takes on Year Two as a Promoter at Placerville

CONCORD, N.C. – March 11, 2016 – As if winning World of Outlaws Craftsman® Sprint Car Series races and competing for the series championship was not enough of a challenge, Kasey Kahne Racing with Mike Curb’s Brad Sweet is looking to his second year as the promoter of the Placerville Short Track Outlaw Showdown presented by Riebes Auto Parts.

The event, now in its second year at California’s Placerville Speedway, was the brain child of Sweet who grew up in nearby Grass Valley. For year two, Sweet is adding some star power and a new division.

“We’ve got Kyle Larson coming, which he grew up racing at Placerville and everybody obviously knows the success he has had,” Sweet said of the NASCAR star. “It seems like just yesterday he was racing at Placerville with the King of the West Series or the local 360 series. Now he is in the NASCAR Sprint Cup Series. It will be neat to have him come back and race in front of the hometown crowd. He’s going to race a midget and a sprint car.

“We’re excited about adding the USAC Western Midgets this year. It’s going to be a great show. There are so many talented drivers on both sides.”

In addition to the USAC midgets and Larson, NASCAR truck series driver and three-time Outlaws winner, Rico Abreu, will join the field as the feature lap count bumps up to 40 laps and the purse becomes $10,000-to-win.

The challenge of promoting was one Sweet said he never really had much interest in. But the challenge of bringing the Outlaws to the track he grew up at swayed him to give it a chance.

“Racing is what I do, so you’re always looking at the other side of it,” Sweet said. “I’ve always been on the driving side of things, never on the promoting side. I never really had a desire to do it. The older I got, the more I’m looking for opportunities to do things and just saw a good opportunity with Placerville. It has such a good following in California and it’s such a neat little race track. It’s where I grew up racing sprint cars, it’s where a lot of people grew up racing sprint cars. It seems like it is always exciting. It’s a tight quarter mile. I always, as a fan, wanted to see the Outlaws go there.”

So Sweet made the event happen last year – it was the first time since 1992 that the Outlaws had been at the track.

The 30-year-old driver who has been the class of the 2016 season so far, racking up three wins and sitting atop the championship points chase after eight events, said he did not realize how much went into putting on one night of racing. The learning curve was immense but he enjoyed it he said. Enhancing the experience for Sweet was the opportunity to do it with his family and friends, including fiancé Rachel Jacobs.

“It’s a lot of learning so you don’t know what to expect,” Sweet said. “There were a lot of things I want to improve on. I want the fan experience to be that much better. I want the show to be a little bit better. I want the race track to be a little bit better. That’s just me. I’m kind of a perfectionist – I really enjoy putting on events and shows for people. I’ve always done it from inside the race car and now I get to do it from outside the racecar.”

On race day, when the focus shifts from being a promoter to a racer, Sweet said he plans on having everything taken care right to the minute so that when he gets in his No. 49 car, he is not worried about the event happening the way he wants.

“As long as my vision and my handprint is all over everything, so to speak, then I have to leave it up to everybody to do all the race day stuff that we’ve setup,” Sweet said. “Preparation is huge for me these next two weeks. We’ll just be making sure we have every duck in a row.”

Tickets for Brad Sweet presents the Placerville Short Track Outlaw Showdown presented by Riebes Auto Parts at Placerville Speedway on March 23 are available by calling 844-DIRT-TIX (347-8849), or by visiting WorldofOutlaws.com/Tickets.