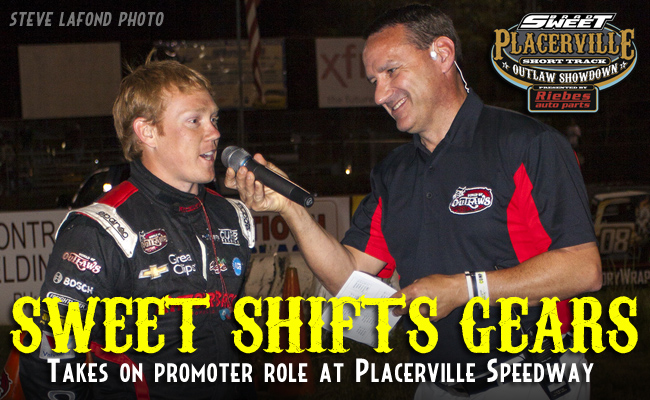 CONCORD, N.C. — March 31, 2015 — The past year has been full of learning experiences for Kasey Kahne Racing driver Brad Sweet. The 29-year-old, Grass Valley, Calif.-native took on his first full World of Outlaws Sprint Car Series season in 2014. In the process of figuring out how to be successful on the grueling Outlaws tour, he took home five wins and the Kevin Gobrecht Rookie of the Year award.

Now, Sweet is diving into a new role – that of promoter.

“I didn’t ever sit around and think, I want to be a sprint car promoter because I’m always on the other side,” Sweet said. “I’m a driver. That’s where my focus is at.”

The opportunity to return the World of Outlaws Sprint Car Series to his home track, Placerville (Calif.) Speedway, after more than 20 years was just too good to pass up.

“I just thought to myself that I would love to go see the Outlaws at Placerville,” Sweet said. “It hasn’t been done in 23 years. If I would want to do it so bad, I’d imagine the fans want to see it too.”

When the Outlaws return to the quarter-mile bull ring in the foothills of Northern California for Brad Sweet’s Placerville Short Track Outlaw Showdown on Wednesday, April 8, it will be the first time since 1992. In the four appearances the series made at the track between 1985 and 1992, Jac Haudenschild and Sammy Swindell each scored two wins.

The support from fans and the community has been strong. Ticket sales have been brisk and Sweet has added regional NAPA Auto Parts distributer Riebes Auto Parts as a partner for the event.

“We’re really excited to add Riebes Auto Parts as the presenting sponsor of the event,” Sweet said. “They’re a local company – they have a couple of stores right there in Placerville. Bart Riebe, the owner of Riebes, is an avid sprint car fan and attends sprint car races, so it was easy to build a relationship.”

The Placerville Riebes Auto Parts store (2885 Ray Lawyer Drive) will host a luncheon open to the public from 11 a.m. to 1 p.m. on the day of the race, featuring an autograph session and giveaways with Sweet and other series drivers.

Ruhs Bros Motorsport has also signed on as an event sponsor.

Great seats for Brad Sweet’s Placerville Outlaw Short Track Showdown presented by Riebes Auto Parts on April 8 are still available. Reserved and general admission tickets are available for $45. Every ticket receives a fan pit pass. There are no age restrictions for pit access during the event. Tickets can be purchased at http://www.WorldofOutlaws.com/Tickets or by calling 1-877-395-8606. General admission tickets will be available on the day of the event.

While Sweet said his main focus remains winning with his Kasey Kahne Racing with Mike Curb team and not on expanding his promoter role, he is hopeful the event will be a successful this year and can continue in seasons to come.

“If this Placerville event is something that we can build up and keep going for a couple of years then that would be pretty fun. We’re looking forward to a great event and great show for the fans.”