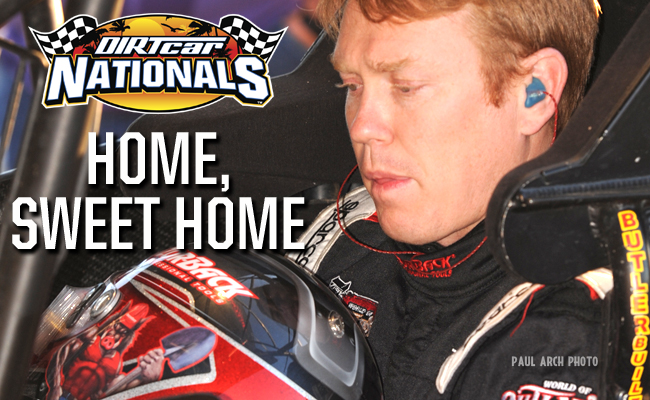 CONCORD, N.C. – February 15, 2017 – About two weeks separated Brad Sweet from 56 tracks across 25 states and one Canadian province, but the World of Outlaws Craftsman® Sprint Car Series schedule is just an everlasting extension of his year-round racing tour. But for a short time, he could be found recovering at his California home from his offseason campaign in Australia. Sweet, who has entered in more than 300 series races since 2004, would soon embark on the 46th running of DIRTcar Nationals at Volusia (Fla.) Speedway Park.

In Australia, Sweet’s highlights included placing second in the 45th Annual Grand National Sprint Car Classic finale and winning the first night of the Scott Darley Challenge for Ruhs Bros Motorsport. His success through Australia is similar to his feats through the five days at DIRTcar Nationals – usually the season opener for the World of Outlaws Craftsman Sprint Car Series.

At the storied series of shows, Sweet has capitalized in the three days the Outlaws race; two days are dedicated to the Arctic Cat All-Star Circuit of Champions Sprint Car Series, when he also competes. Specifically for the Outlaw shows, Sweet has won the last four of nine races. Last season he nearly swept the event, winning two of the three shows. Sweet placed second on the second night of racing at Volusia.

Sweet’s dominance at DIRTcar Nationals has jumpstarted the past two season, as he has finished in the Top-five in points since 2015. He also has some personal accomplishments at the “World’s Fastest Half-Mile,” being the first to win multiple shows at the event since the newly inducted Motorsports Hall of Famer, Steve Kinser. Kinser is the not only the winningest driver in series history, but he also tops the chart with 20 championships – more than double from the second highest. Sweet will be able to use his consistent relentlessness at the event in 2017.

“I think for whatever reason, Volusia is just a track that suits my driving style,” Sweet said. I just really enjoy racing there and we’ve always been fast there. But it’s also a testament to our team. Whenever you can come right out of the box the first couple races and have that speed in your racecar – timing well and winning races – it’s a testament to how much preparation over the offseason Kasey Kahne Racing does.”

Sweet owes the team’s success to owner Kasey Kahne, who has supplied the team with the equipment to succeed; while Sweet has seen many successes, teammate Daryn Pittman has also won a series championship (2013). Though, this year presents a change to the teams’ most major crew members. A change of crew chiefs during the offseason leaves Sweet with Kale Kahne – Pittman’s former crew chief whom he won the championship with – while Eric Prutzman will accompany Pittman in 2017. To Sweet however, this is but a minor change.

Both Sweet and Pittman have seen success on the series year-after-year. However, another parallelism they both shared last season was uncharacteristic. Kasey Kahne Racing as a whole endured a four-month winless streak; Sweet went 33 races without a win after solidifying himself as a front-runner early in the season.

It was at Lakeside (Kan.) Speedway where he snapped the streak; ironically, Pittman also snapped his four-month streak the following night at Salina (Okla.) Highbanks Speedway. Sweet admitted that finding success early was both a blessing and a curse. The team built on its confidence following DIRTcar Nationals, winning four more times. But Sweet and his crew tapered off because they grew too comfortable and failed to adapt to the changing conditions.

“We were winning races in the beginning of the season, and you get comfortable and complacent,” Sweet said. “Everyone else is still working hard in trying to catch up to you. Then all the sudden they’re passed you and you’re behind. We got behind, and got searching. And anytime you’re searching, it takes a few months. Then toward the end of the season we were back on track. It was just a bad deal overall for both of us.”

Sweet will not only try to better his near-perfect record at DIRTcar Nationals, but also carry the momentum to the rest of the season. To prepare for the some-90 races in a rigorous schedule, Kasey Kahne Racing and NAPA Auto Parts will debut their partnership at Volusia. In December, the two inked a deal for 42 races.

“It’s great for everybody – for myself, Kasey Kahne Racing and the sport of sprint car racing,” Sweet said. “NAPA is such a recognizable company that everybody knows it’s a huge part of motorsports and the auto industry. So anytime a company like that is willing to come into our sport and sponsor a race team, I think it says a lot about how far the World of Outlaws has come, how far sprint car racing has come and how professional Kasey Kahne Racing is to have a sponsor like that. I’m just honored to be able to represent the blue colors and hopefully we’ll put that NAPA car in victory lane.”

The historic DIRTcar Nationals is the most accessible motorsports event during the Florida in February jaunt. Every ticket is a hot pass, so fans can get up close and personal to all the action. Fans will be able to meet their favorite drivers from each of the competing series.

Tickets for DIRTcar Nationals start at just $20 and are on sale now by calling 844-DIRT-TIX (347-8849), or by visiting http://www.DIRTcarNationals.com.

Visit http://www.DIRTcarNationals.com for the latest news and information from the event. Follow DIRTcar Nationals on Twitter at http://www.Twitter.com/DIRTcarNats.