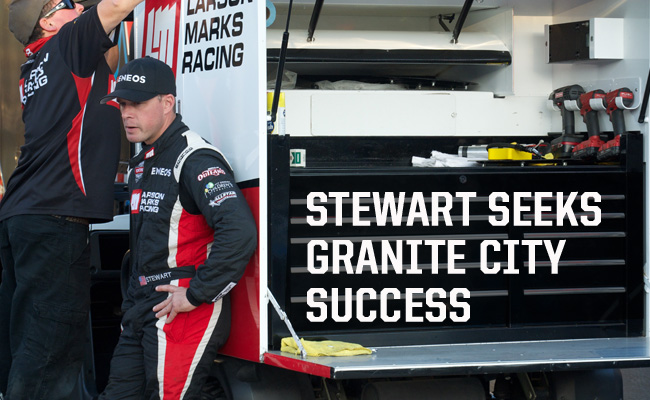 SAUK RAPIDS, MN — June 15, 2017 — Only one driver has led laps in both of the previous World of Outlaws Craftsman Sprint Car Series events at Granite City Speedway in Minnesota. That same driver is also the only one to finish among the top-five in both races. In fact he has finished first and second. Who is the driver? Shane Stewart, who was victorious last season at the three-eighths-mile, after a runner-up finish in the inaugural event for the Outlaws at Granite City Speedway in 2015.

Stewart looks to extend his string of top-two finishes at Granite City Speedway on Tuesday, June 20 as the World of Outlaws Craftsman Sprint Car Series returns to the track for the third consecutive season in an event presented by Marthaler Chevrolet of Glenwood.

“Anytime you win at a place you go back there with really good notes,” said Stewart. “The crazy thing about what we do is that sometimes when you go back to the racetrack with the same set-up you can be just terrible. A lot of it is track conditions. We obviously made good changes to the car that night and hopefully we can do the same this year. We’re looking forward to getting back to Granite City. Anytime you win somewhere, you always look forward to going back.”

Stewart picked up his first win of the season last month at the famed Williams Grove Speedway in Pennsylvania. He followed that up on Memorial Day evening at Lawrenceburg Speedway in Indiana, in an instant classic, that saw him and his car owner, NASCAR star Kyle Larson trade a lead a handful of times. The wins helped propel Stewart into the top-five in the series standings. Stewart got to battle his car owner again the other night at Eagle Raceway in Nebraska, with Larson picking up the win this time and Stewart crossing the line a very close third.

“It’s no secret that Williams Grove isn’t my favorite place,” Stewart said. “I’ve struggled there the last few seasons and I’m not sure why. I think it’s just a comfort thing. To finally break through and get a victory, especially in the Morgan Cup, was huge. By winning the Morgan Cup, that kept it on the World of Outlaws side, which means a lot to all of the guys. We’ve always run well at Lawrenceburg and this year had a great race with Kyle (Larson). We’re looking forward to maybe getting to race a few races with him coming up. He always lifts everyone’s level up because he is so good. It was really cool to race him for the win. Hopefully we can keep the momentum going.”

The World of Outlaws Craftsman Sprint Car Series visit to Granite City Speedway is part of a busy stretch of races that will see the series hit the track three times that week as well as three times the previous week and three times the week after. For Stewart, who is an avid about working out, this is the time of the year that the early-morning visits to the gym in the off-season really pay off.

“You can always tell the guys that are in pretty good shape,” explained the veteran driver. “When you start racing a lot, it really shows. The drivers who are in pretty good shape don’t make too many mistakes in the race car. I enjoy this time of the year. I prefer to race as much as we can, which is about every other day right now.”

Stewart, who is in his fifth season with the Larson Mark Racing team is in his first season working with crew chief Bob Curtis. The pair worked together in the early days of Larson Marks Racing, when the team was building a foundation to hit the road full-time with the World of Outlaw Craftsman Sprint Car Series.

“Bob (Curtis) and I are getting on the same page and working things out,” Stewart said. “It took a little bit, but it’s tough when you throw a new person into that role. Sometimes you hit it right away and gain that speed straight away and sometimes you have to work at it. We just had to work at it. I think things are heading in the right direction now.”

With temperatures beginning to rise and the calendar inching towards July, the “Month of Money” is just around the corner. Stewart has those races circles on his calendar and carries plenty of momentum into the summer. On the stats sheet, he has the third-most top-10 finishes on the series and is one of just six drivers who has multiple victories thus far in 2017.

“There are big races coming up and I would love to run well at them all,” he said. “We’ve run really well the last few years at the Knoxville Nationals and it would be really cool to finally break through there and get a big victory. To complete our year, we obviously want to win more races than we did last year and the year before. We just have to keep building on our momentum and getting in the dash. Getting in the dash is something you have to do to give yourself a chance at winning and that’s something we are really working on.”

Tickets for the World of Outlaws Craftsman Sprint Car Series presented by Marthaler Chevrolet of Glenwood at Granite City Speedway on Tuesday, June 20, can be purchased online at or by calling 815-344-2023 and at the track on race day.

Fans can also save $5 on General Admission tickets when purchased at participating NAPA Auto Parts stores. Tickets buyers will exchange their NAPA receipt for a race ticket at the Main Grandstand ticket booth on race day.