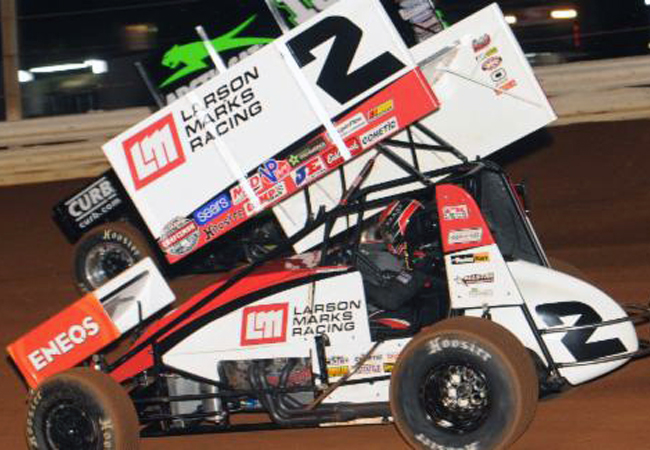 MOORESVILLE, NC — (JUNE 12, 2017) — The Larson Marks Racing team wrapped up the World of Outlaws double-header at Knoxville Raceway this weekend with a pair of solid top-10 finishes. Friday night, Shane Stewart earned a fourth-place finish and followed it up with a sixth-place effort on Saturday.

Stewart opened the weekend with a fourth-place qualifying effort in Flight A of time trials on Friday and won his heat race from the outside of the front row. The four pill was drawn for the Craftsman Club Dash inversion, putting the LMR No. 2 on the outside of the front row. On the start of the six-lap dash, Stewart slipped back and finished fifth, to earn an inside row three starting spot for the main event. He was able to climb one spot in the 25-lap main event to tally a fourth-place finish.

The following night, Stewart qualified 14th in Flight B, but made a charge from seventh to fourth in the fourth and final heat race. The pilot of the LMR No. 2 started 16th on the grid for the 25-lap main event. By lap 10, Stewart broke into the top-10 and gained four more positions in the closing laps to score a sixth-place finish and earn the KSE Hard Charger award for passing the most cars.

“Unfortunately, on Friday the track took rubber and there wasn’t much passing, but we’re proud of the top-five finish. Then on Saturday, I put us behind early in the night during qualifying, but it felt good to be able to rebound in the heat race and main event. I’m so thankful for my guys, they provided me with a fast car to be able to move through the field. I’m looking forward to Eagle on Tuesday.”

The Larson Marks Racing team will be back in action tomorrow at Eagle (Neb.) Raceway for the Eagle Nationals.