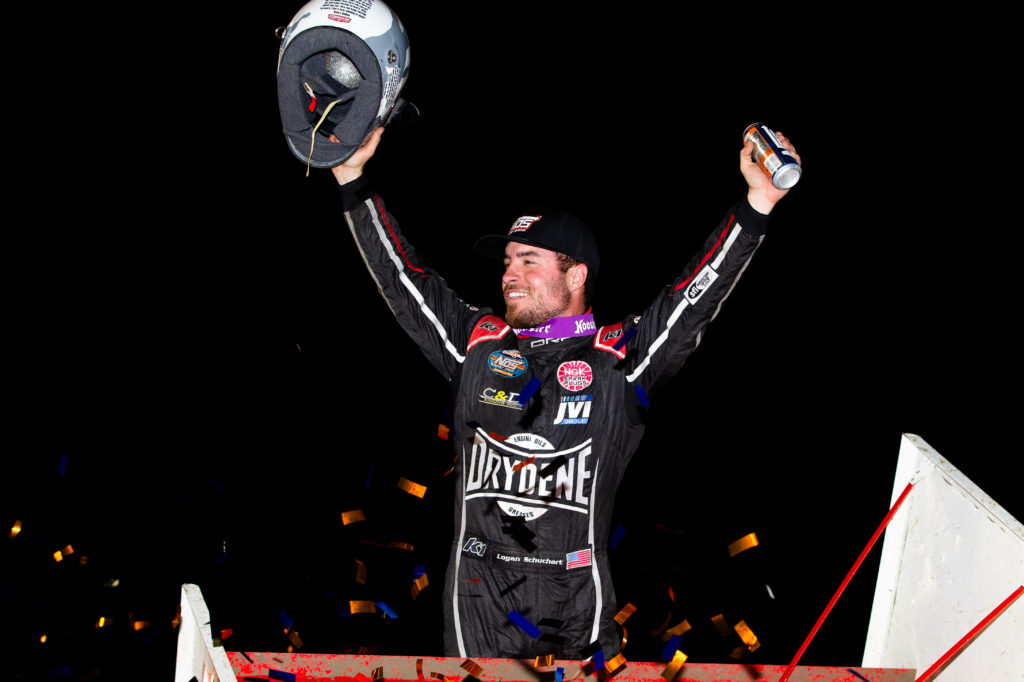 It had been eight races since his 299th career triumph on October 3, 2020 at Williams Grove, and he was all but destined to finally reach the landmark accomplishment. The Tony Stewart/Curb-Agajanian Racing #15 was cruising through traffic, he had led since the drop of the green flag, and second was nowhere to be found. Of course, then the unexpected happened.

His Ford Performance engine lost power and slowed to a stop with the white flag waiting for him on the other side. The Volusia Speedway Park crowd was shocked. A trip to the work area quickly solved the issue, but it didn’t take away the dramatics of Schatz’s continued pursuit of 300, which will have to continue next week at Dixie (GA) Speedway on Fri, Feb. 12 and Talladega (AL) Short Track on Sat, Feb. 13.

“It was just a defective ignition box, that thing was brand new on this engine tonight,” Schatz noted afterwards. “I actually thought we cut a fuel line for a minute, because I was getting wet, but it was the MSD. It is what it is.”

Schatz’s suffering came to the benefit of Logan Schuchart, who inherited the race lead coming to a green-white-checkered finish. His winning move actually came three laps prior on the 25th circuit, when Schuchart finally cleared Cory Eliason for the second spot after a race-long battle.

“It took me forever to get by Cory after that long green flag run,” Schuchart said. “I glanced forward to look for Donny once I got to second and I couldn’t see him. He was really fast, but I still felt like we had a car to beat there at the end, especially if we could’ve got some traffic. It’s not something you want to see happen, you want to win the right away. It’s also part of the game, though. For years, they’ve set the bar as far as handling issues, limiting DNF’s, and stuff that saves you championships. It’s something we all strive for nowadays because of them.”

With only two laps remaining and the lead thrown in his lap, the Shark Racing #1S pilot still had one final challenge to complete. Perfecting his launch off turn four to the SeaFoam Restart Zone, Schuchart instantly gapped the field and drove away to a 1.447-second victory over fellow Pennsylvanian Danny Dietrich.

Logan’s victory put the finishing touches on a near impeccable performance by the Drydene Performance Products crew at DIRTcar Nationals. In four events on the daunting Barberville, FL half-mile this week, the 28-year old ace recorded runs of 1st-2nd-2nd-1st. He secured his first career Big Gator Championship over title contender Brad Sweet, who he also overtook in the early-season standings for the World of Outlaws Sprint Cars.

“We had confidence coming down here, but when it pays off like it means a lot,” Schuchart mentioned. “When your confidence is high, your team feels good, and you perform better. It definitely feels good doing this against the quality of cars we had here. The Outlaws are so stacked this year and we’ve got a lot of good invaders joining us. My grandfather’s dream is looking awesome, though. I’m really proud of this Shark Racing team.”

Following Schuchart to the stripe on Sunday night was Danny Dietrich, who set Slick Woody’s Cornhole Company Quick Time at 13.919 seconds. Cory Eliason of Visalia, CA rounded out the podium aboard his Rudeen Racing #26 after starting on the outside pole.

David Gravel recorded his fourth consecutive fourth-place finish of the week by chasing that trio to the line in his Big Game Motorsports #2. Friday’s season opening winners, Brad Sweet, closed out the top five with another consistent run for his Kasey Kahne Racing, NAPA Auto Parts #49.

The World of Outlaws NOS Energy Drink Sprint Car Series will resume a 90+ race championship chase next weekend when the Dirty South Swing begins. It all starts on Friday, February 12 at Georgia’s Dixie Speedway and rolls through Saturday, February 13 at Alabama’s Talladega Short Track. Fans can BUY TICKETS HERE for next weekend’s action.