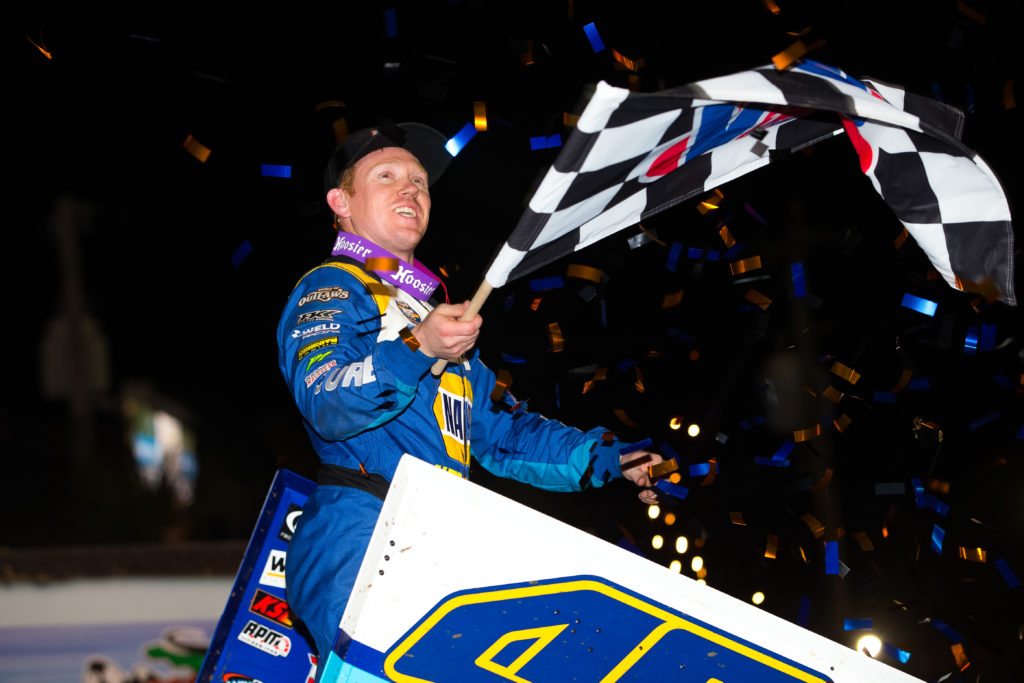 It’s like The Big Cat said himself: “The cream rises to the top.”

Just as they did one year ago, the most predominant trio in the current landscape of the World of Outlaws NOS Energy Drink Sprint Car Series rose to the occasion in Friday’s 2021 season opener at Volusia Speedway Park; setting the stage for another potentially historic championship chase.

You can’t say one without the other these days. They controlled the podium of the 2020 season opener, the entire 2020 championship bout, and now again the 2021 season opener. When you’re good, you’re good; and these guys are great.

“We’re going to have a heck of a battle between three, four, maybe even five of us this year,” Sweet noted on the title fight. “Logan is putting pressure on us, Donny is putting pressure on us, and those other guys are just as good too. It’s only night one, but I feel like I had to drive my ass off to get this win. I think as long as we stay focused, we should have a lot of confidence moving forward. Obviously excited to start the season with a win, but we know this one doesn’t mean a whole lot. We’ve still got 90 some other races to go.”

Starting the 30-lap, $10,000-to-win NOS Energy Drink Feature from the fourth spot, Sweet would have to overcome a motivated front row of Sunnyvale, TX native Sam Hafertepe Jr. and Shark Racing’s Jacob Allen. For Hafertepe, he had a perfect night going with hopes of ending a nine-year dry spell in Outlaws competition; for Allen, it’s about proving his new outlook can continue to deliver more victories with The Greatest Show on Dirt.

When the first green flag of the year flew, it was Allen jetting to the early lead over Hafertepe. The Hanover, PA native, son to legendary Bobby Allen, commanded the opening eight laps aboard his Drydene Performance Products #1A before The Big Cat came pouncing.

Sweet maneuvered his Kasey Kahne Racing, NAPA Auto Parts #49 around Hafertepe on lap four, and then set his sights on Allen. Just five laps later, he sped to the race lead and cruised by Allen to take the top spot on the ninth circuit. Lap traffic would present a few tricky challenges, but it was never enough to deter Sweet’s momentum on this opening night.

“We struggled in the heat race, but tried a little something in the dash and it hit, then we went even further for the feature,” Sweet said on his setup by KKR’s Eric Prutzman, Joe Mooney, and Andrew Bowman. “The race track was a lot more grueling tonight. It was high speed and the bottom was super technical. You had to miss the hole, then slow yourself down to get off on exit, and you had to get to the inside wall or it was super slick. I wasn’t sure where to be sometimes and I was trying to judge off lap cars, but they’re tough to read. I felt like I drove a really good race, but we can always make some improvements.”

While Sweet snuck through traffic, the most exciting battle on track was brewing behind him. Schuchart passed teammate Allen for second on lap 12, and shortly after came David Gravel to the third spot in the Big Game Motorsports #2. However, further back at halfway, was a hard charging Donny Schatz storming his way into fifth from the 18th starting position.

At one point, Gravel grabbed the runner-up spot on lap 20, but one bobble sent him falling backwards and opened the door for Schuchart and Schatz. For a brief moment, the Shark Racing #1S and Tony Stewart Racing #15 were certainly closing on Sweet’s #49, but the two-time and defending Series champion picked up the pace and ran the hour glass out on Logan and Donny’s pursuit.

“I felt like we could catch Brad [Sweet] at times, but I just didn’t get by the lappers as good as I needed to,” Schuchart mentioned. “It’s huge starting off the season like this though. After the first two nights, I really wished they were Outlaw shows. We’ve got two more nights though, and we feel really good. These Drydene Performance Products guys are working hard to deliver some amazing race cars.”

Following Sweet and Schuchart to the stripe was Schatz, who at one point looked like he was going to make the improbable run from 18th-to-1st. Down the stretch, however, his run halted and the ten-time World of Outlaws champion settled for KSE Hard Charger honors with a +15 performance to put the Tony Stewart Racing, Ford Performance, Carquest #15 on the podium.

“We were decent,” Schatz said, knowing qualifying hurt his run. “The guys weren’t happy, I wasn’t happy, but all you can do is rally back. They made the car better and I felt like we had a chance there at the end. I zigged when I probably should’ve zagged in lap traffic, but that’s the way it goes somedays.”

Behind the podium of Sweet, Schuchart and Schatz was top five finishers David Gravel in the Huset’s Speedway #2 and Carson Macedo driving the Jason Johnson Racing #41.

Closing out the top ten in Friday’s season opener was Aaron Reutzel aboard the Roth Motorsports #83, Jacob Allen in the Shark Racing #1A, Brent Marks in his CJB Motorsports #5, Kasey Kahne in the Karavan Trailers #9, and the Brownsburg Bullet Joey Saldana driving Ed Neumeister’s #12.

The World of Outlaws NOS Energy Drink Sprint Car season continues on Saturday with another night at the 50th DIRTcar Nationals held at Volusia Speedway Park in Barberville, FL. Fans can BUY TICKETS HERE or purchase them at the gate.