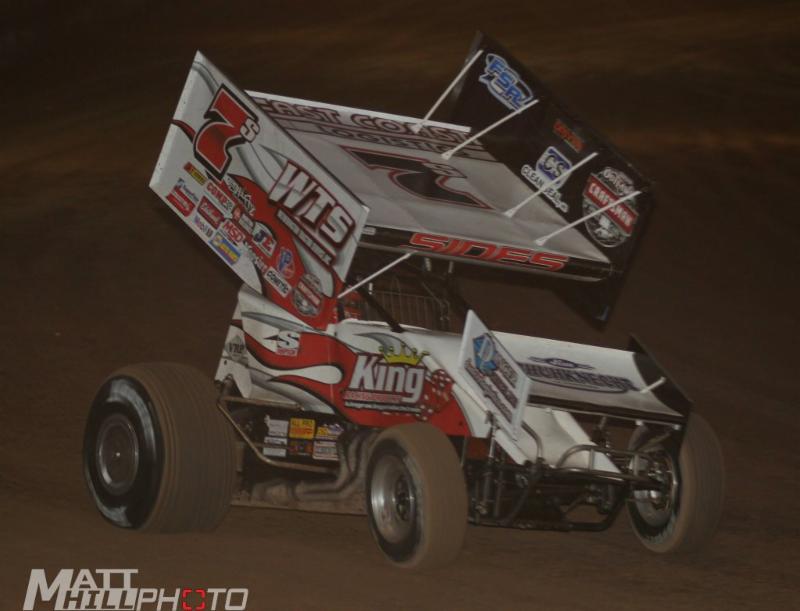 Sides opened the competition last Wednesday at Lincoln Park Speedway in Putnamville, Ind., by qualifying eighth quickest. He then advanced from third to second place in a heat race to earn a spot in the dash, where Sides again picked up a position to finish fourth. That lined him up on the outside of the second row for the main event.

“I got to third on the second or third lap by passing (Daryn) Pittman,” he said. “We raced for a while and he got back by me. (Kyle) Larson got by ripping around the top. We ran fifth until Larson got into the wall and flipped. After that I was right there with Donny (Schatz), David (Gravel) and Pittman in traffic. I thought if we stayed in traffic we could have had a top three.”

Sides garnered a fourth-place result, which was his third top five of the season.

That gave the team momentum heading into a doubleheader last weekend at Knoxville Raceway.

“Night 1 was experimentation,” he said. “We tried something on Friday. In the feature the car didn’t want to rotate the corners as well as I wanted it to. We learned some stuff, but the biggest thing was trying to free the car up and trying to make it faster, less drag on everything.”

Sides qualified 13th quickest in his group, placed sixth in a heat race and ended third in the Last Chance Showdown to transfer into the back of the main event. He finished 20th in the feature.

“The next night we had a standard setup and it was way better,” he said.

Sides timed in sixth quickest overall and he scored a runner-up result in a heat race to lock into the dash, where he settled for seventh.

“In the first few laps of the feature there was a big crash and we barely got into it, but we drove away from it,” he said. “The officials called a red flag so I stopped. They said it’s going to take a while and will be an open red flag. We went to the work area and it was like 15 or 20 minutes. The drag link was bent and left radius rod so we fixed that. The Outlaws officials said I was involved in the crash even though I drove away from it and instead of restarting sixth I had to restart toward the back. I had a good night going there and they took it away.”

Sides was forced to restart near the rear of the field and he ended with an 18th-place result.

Racing continues with the World of Outlaws on Tuesday at Granite City Speedway in Sauk Rapids, Minn.; Friday at River Cities Speedway in Grand Forks, N.D.; and Sunday at Brown County Speedway in Aberdeen, S.D.

Keep up with Sides Motorsports via free, live audio from DIRTVision at every World of Outlaws Sprint Car Series event throughout the season. Select events also include live Pay-Per-View video. For more information, click http://www.DIRTVision.com.

“Jim started helping out a couple of years ago,” Sides said. “He’s a really good guy and has helped me when I’ve needed it the most.”

To meet the media relations needs of your program by joining Team ILP, contact Shawn at 541-510-3663 or [email protected]. For more information on Inside Line Promotions, visit http://www.InsideLinePromotions.com.