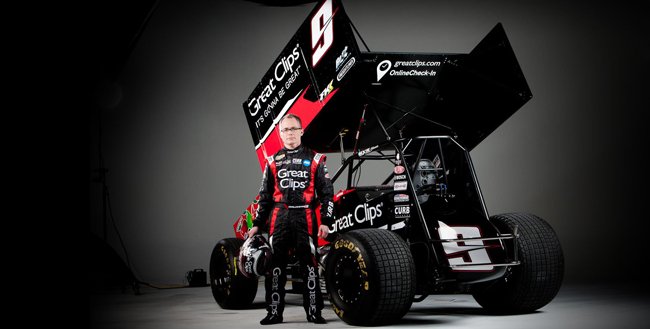 MOORESVILLE, NC (January 3, 2012) — Kasey Kahne Racing (KKR) announced today that longtime sponsor, Great Clips Inc., will back Joey Saldana for the 2012 World of Outlaws season. Great Clips Inc. has been a sponsor of KKR for the past two seasons on the #91 car with drivers Cody Darrah and Paul McMahan. In 2012, they will be a primary sponsor on the #9 entry with Saldana as well as an associate sponsor on Brad Sweet’s #49 and Cody Darrah’s #5 World of Outlaws cars.

“The folks at Great Clips have been a great partner of mine for years in both my Nationwide Series efforts as well as my sprint car teams and we look forward to continuing that relationship,” said Kasey Kahne, owner of Kasey Kahne Racing.

Saldana, who has been with KKR for six seasons, has won more than 85 World of Outlaws races. He finished third in points in 2006 and second in 2007. He won 20 races in 2009 on his way to third in points. He finished fourth in points in 2010 with 13 wins. In 2011, Saldana was contending for the title when he broke his arm, ribs and punctured a lung at the King’s Royal race in July that caused him to be out for nine weeks.

Saldana’s first race in the #9 with Great Clips will be at the UNOH DIRTcar Nationals at Volusia Speedway Park in Florida beginning February 15 th.

About Great Clips: Great Clips, Inc. was established in 1982 in Minneapolis. Today, Great Clips has more than 3,000 salons throughout the United States and Canada, making it the world’s largest salon brand. Great Clips salons employ nearly 30,000 stylists who receive ongoing training to learn advanced skills and the latest trends. Make Great Clips your choice for value-priced, high-quality haircare for men, women and children. No appointments needed, and salons are open nights and weekends. And, it’s more convenient than ever with Great Clips’ Online Check-In. To check-in online, visit www.greatclips.com or download the app for Android and iPhone. For more information about Great Clips, Inc. or to find a location near you, visit www.greatclips.com.