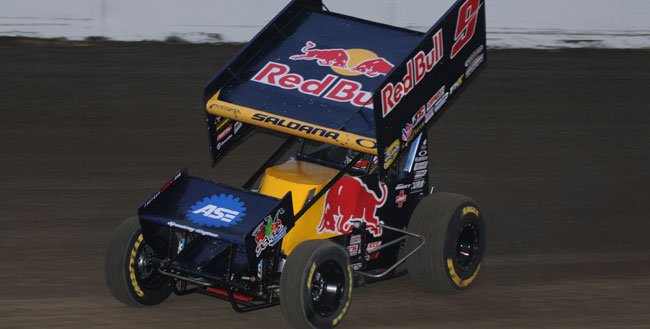 In the thick of the World of Outlaws Sprint Car Series championship battle during the Kings Royal in July at Eldora Speedway, Saldana was caught in a scary crash. After everything settled and doctors finished examining him, Saldana was diagnosed with a shattered right forearm, five broken ribs and a punctured lung. His hopes for his first championship were also bruised for a second consecutive season. (J.D. Photography photo.)

Now, a little more than two months after he thought he was going to be out of action until next season, Saldana is climbing back into his Kasey Kahne Racing #9 Red Bull Maxim beginning Wednesday night at Hartford (Mich.) Motor Speedway before a return date with Eldora on Friday night and Lernerville Speedway on Saturday.

“Nine weeks is the longest I have ever been out of a car, including the off-season,” Saldana said. “Once I received the medical clearance from the doctors, I hit the ground running on my rehab. I began working out again at Pit Fit. It’s a gym in Indianapolis that caters to race car drivers. Larry Dixon and others work out there. I’m able to get in three workouts a week there and it’s really helped me regain the strength in my arm and all over. On the other two days of the week, I’ve been running to help out my lung. I was running five miles a day before the accident and I’m working to get back to that level.”

Since the accident, KKR teammate Brad Sweet has been filling in for Saldana. With first year crew chief Kale Kahne turning the wrenches, the Red Bull sprinter has been up near the front of the pack and even started on the outside pole for the 51st Goodyear Knoxville Nationals. Sweet will sit out the race at Hartford Motor Speedway but will return in another KKR car in time for the racing action at Eldora Speedway on Friday and the Commonwealth Clash on Saturday at Lernerville Speedway.

“Brad has done a great job and I can’t thank him enough for all the work he did,” Saldana said. “Hopefully he will be testing a new chassis that will end up being a safer for us all.”

As his recovery progressed, Saldana was hopeful he could return with enough races left this season to prepare for the World Finals in Charlotte and get ready for another run at the championship in 2012 beginning in February with the DIRTcar Nationals at Volusia Speedway Park.

“I wanted to get back in at Hartford before tackling Eldora and Lernerville,” he said. “I felt like that would give me enough time to get used to everything before we hit a big event. It’s also nice to get in a decent amount time before the season ends so we can prepare for next year.”

Tickets are available to see Saldana return to action on Wednesday night at Hartford Motor Speedway by going to www.SLSPromotions.com.

Tickets are also available for the racing action Friday at Eldora Speedway near Rossburg, Ohio, by going to www.EldoraSpeedway.com, or Saturday night’s Commonwealth Clash at Lernerville Speedway by going to www.Lernerville.com or calling 724-353-1511.