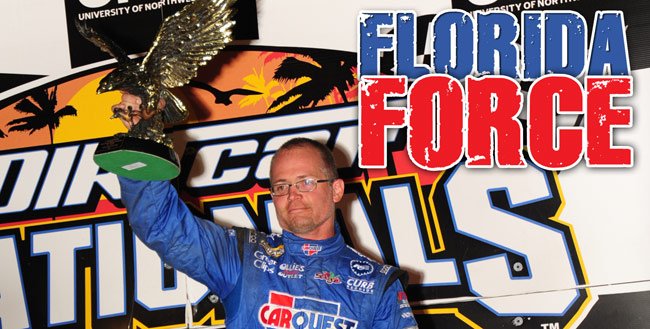 CONCORD, N.C. — Jan. 26, 2012 — With less than three weeks until the World of Outlaws Sprint Car Series season-opening event, anticipation is ramping up.

The Outlaws and an assembly of additional elite talent are preparing to kick off the 2012 campaign — a growing slate of 83 events at 51 tracks in 23 states plus Canada — at the 41st annual UNOH DIRTcar Nationals Presented by Summit Racing Equipment at Volusia Speedway Park in Barberville, Fla. The event runs from Feb. 14-25, with the Outlaws racing Feb. 17-18-19.

Among the stacked group of drivers is Joey Saldana, who claimed the UNOH DIRTcar Nationals Presented by Summit title last season. The Brownsburg, Ind., native earned quick time two of the three nights and he ended with two third-place results and an eight-place finish.

“We didn’t win a race; we were just consistent,” he said. “Volusia is one of those tracks with hard competition, and the track is hard. You just have to be consistent every night.”

While Saldana has won twice since 2006 at the half-mile track, he has thrived on consistency. Since 2008, Saldana has six top-five finishes and nine top 10s in 11 races.

“Volusia has always been pretty good for us,” he said. “I’m definitely looking forward to going there and getting the season started.

“It’s a fast track kind of like Eldora (Speedway in Rossburg, Ohio). It’s probably one of the fastest tracks we race on. I like fast tracks, so it kind of fits my style.”