Skip to content
• Rose Races with the Best
Tags: 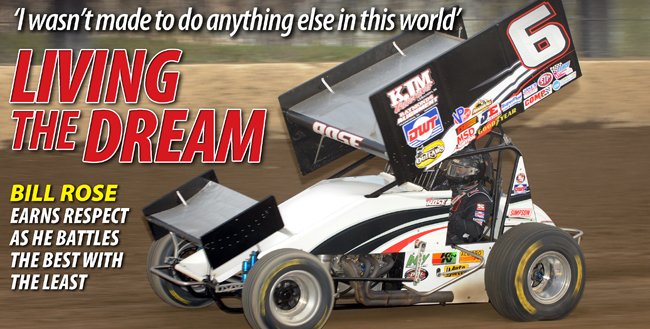 Living the Dream: Rose Takes On World of Outlaws One Mile at a Time

CONCORD, N.C. — June 9, 2011 — The next time you’re in the World of Outlaws Sprint Car Series pit area getting autographs at the end of the night, you’ll probably see several pristine race haulers parked side by side. As you move from driver to driver, you’ll see the fully decked out transporters with video screens and polished cabinetry that teams like Tony Stewart Racing and Kasey Kahne Racing use. Keep going and you’ll find a white Freightliner, model year 1994, adorned with the initials “BRR” and the proper Department of Transportation insignias. That rig is connected to an equally white trailer from 1986. (Paul Arch photo)

You’ve found Bill Rose — driver, owner and crewman from Plainfield, Ind. — who is going wheel to wheel in 2011 with the likes of Kinser, Schatz, Saldana and Meyers in hopes of winning the Kevin Gobrecht Rookie of the Year Award.

“The rig just crossed over a million miles,” said Rose with a smile. “The best part is that she’s still going strong and I finally have the trailer organized and built just the way I want it. I originally got it when it was halfway built. Over time, I’ve just customized it how I wanted it.”

Rose is attempting to survive the grueling World of Outlaws schedule — including the Mediacom Shootout Friday and Saturday at Knoxville Raceway — in his #6R Maxim by taking on larger teams like those of Stewart and Kahne with nothing more than the sweat of his and lone crewman Rodger Knapp’s brow.

“I love racing, plain and simple,” said Rose, 46, who is in his 31st season as a driver. “It doesn’t matter if it is a World of Outlaws Sprint Car or a factory stock, if the opportunity is there to race, I’ll do it. I wasn’t made to do anything else in this world.”

Many would think running up and down the highways would ring up quite a fuel bill. After factoring in crew pay, tires and race fuel and other expenses, the cost of running the entire Outlaws schedule, as well as several non-wing races that he calls his hobby, the bills certainly pile up quickly.

“I fund this deal out of my own pocket,” Rose said. “The most sponsorship I ever received in one year was $12,000 to run a USAC car. That’s it. I’ve been very fortunate to have several people along the way cut me breaks and donate things. Ultimately, we have to be very frugal with what we have. In the beginning of the season, we ran a 2006 Maxim chassis. I run used tires pretty much every night except for the right rear, which I only buy one of each night we race. I work hard throughout the week so I can go racing each and every weekend. Rodger is the same way. I can only afford to pay him part time and he lives four hours away. It’s a strain on him too. Each week, I end up doing a great deal of the upkeep on the car and then Rodger comes down and we drive the rig to the races. I would love to find someone or a group that wants to come on board and help us sponsor this deal”

Being frugal has allowed Rose the opportunity to compete with the Outlaws since the season-opening weekend at Volusia Speedway Park. Despite missing the A-main on three occasions this year, Rose finds himself 13th in the points standings with a top-10 finish to his credit at Tri-State Speedway in Haubstadt, Ind. He’s led seven laps and sat on the pole at I-96 Speedway.

Rose contends that, had it not been for bad luck, he’d have several more great finishes.

“I have had some really weird things happen to me this year, things breaking in weird positions or angles, things that I’ve never seen before really,” he said. “We were running forth at Chico (Silver Dollar Speedway) until we lost a bolt that held the in board brake pads on. I essentially was running around that bullring with no brakes and when we had a red, I couldn’t stop so I wound up hitting (Kyle) Larson and the wall. It ruined what otherwise was a fantastic night for us. We also had one heckuva night at I-96 (Speedway.) We won the dash and started the “A” on the pole. Unfortunately, we had problems with fuel mileage but we led laps and that was good for us.”

Despite early season of frustrations, Rose still carries a smile on his face and relaxed demeanor. Many in the pits admire the task he has taken on for himself and the way he goes about it.

“Bill is always a great sight at the pill draw,” says Luci Farley, who counts driver registration among her varied tasks as an official with the World of Outlaws Sprint Car Series. “It doesn’t matter what he draws, he still makes everyone laugh and takes whatever the draw deals him. Good or bad.”

For Rose’s part, he appreciates the respect he is given by the likes of champions Kinser, Schatz, Meyers and other drivers on the World of Outlaws circuit.

“Those guys really do respect me,” Rose said. “They could ignore me because I’m not on the same level as them but the really cool thing is that they talk to me and treat me like one of their own. That means the world to me.”

So as the Outlaws prepare to race Friday and Saturday nights in the Mediacom Shootout at Knoxville Raceway, Rose will once again spend an entire week working during the day to earn the money that keeps the wheels on his rig turning. At night, he’ll work to prepare his machine so he can continue to chase his dreams of racing non-stop. With all this hard work, maybe one day, Rose and his crew will get their big break.

“We’d really like to end up in a deal where all we have to do is focus on the racing,” he said. “If we can do that, then that’s the dream there.”

Tickets are still available for the Mediacom Shootout at the Knoxville Raceway by visiting www.KnoxvilleRaceway.com