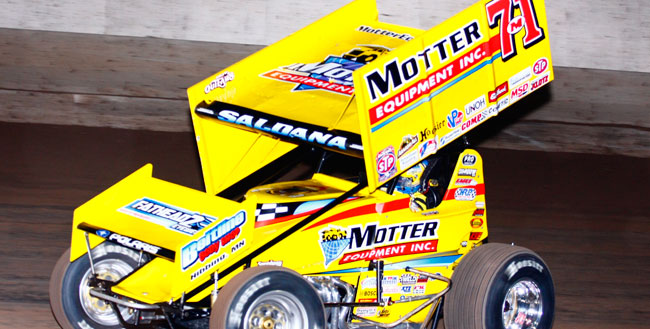 A 2000 winner at Kings Speedway, where the series hasn’t completed an event since 2003, Saldana has the 3/8-mile track circled on his calendar. The World of Outlaws STP Sprint Car Series competes at Kings Speedway on Friday, April 12.

“I’m definitely looking forward to Hanford,” Saldana said. “We don’t get to race there much. I love racing there and we’ve been fortunate enough to win a race. Hopefully we can go back there and get right where we left off and that was with a win, so hopefully this 71m car can get a victory out here on the West Coast.”

Dating back to 2000, the past six races at Kings Speedway have been won by a different driver. Before that streak, 20-time champion Steve Kinser claimed a series-leading seven wins with Sammy Swindell, Stevie Smith and Danny Lasoski each winning three of the 28 World of Outlaws STP Sprint Car Series events between 1985-2003.

“It’s always been a fun place to go race,” Kerry Madsen said. “It’s got a nice little progressive banking to it so it can be quite quick and I’m pretty excited to go back there.”

Tickets can be ordered online by clicking WorldofOutlaws.com/tickets or by calling 877-395-8606. Fans who purchase an advanced reserve ticket may receive a FREE fan pit pass.