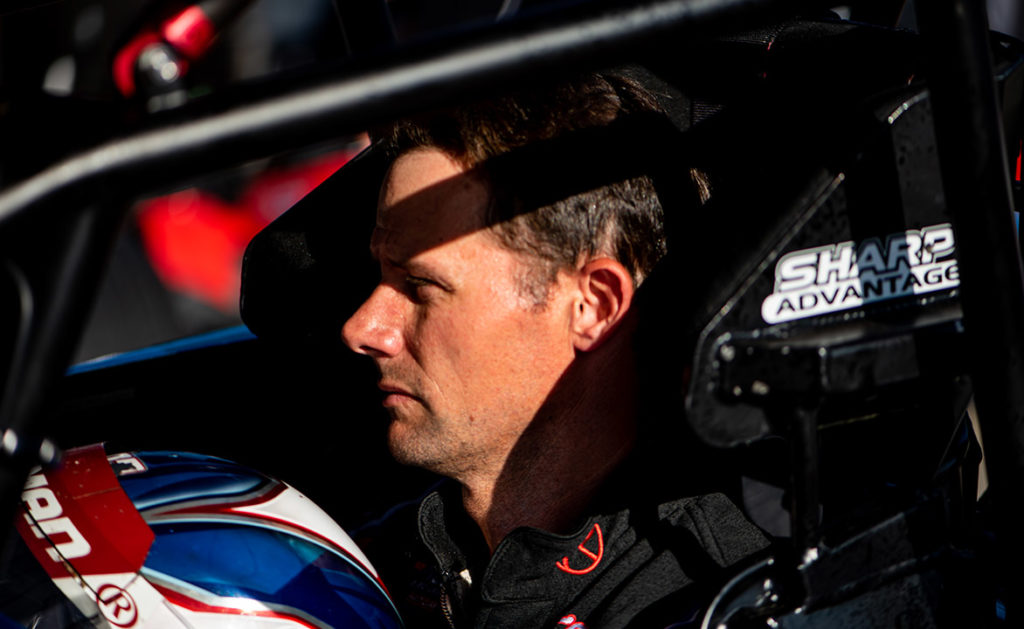 Daryn Pittman’s racing career kicked off at 5 years old. However, it wasn’t until he was about 13 that he turned his passion into a life’s goal.

He wanted to be a professional race car driver. And for more than 20 years, the now 42-year-old Owasso, OK native has made that a reality.

Tonight, he’ll put a period to one chapter in his storied career. Pittman will hang up his helmet as a full-time World of Outlaws NOS Energy Drink Sprint Car Series driver after the season finale Last Call at The Dirt Track at Charlotte.

In his 23-year history with the Series – 17 of them as a full-time driver – Pittman amassed a plethora of accomplishments:

But are those satisfying enough to the 13-year-old Pittman who dreamed of being a World of Outlaws driver?

“I hope so,” Pittman said with a chuckle. “There are a lot of things that I’d obviously love to redo. But all in all, it has been a hell of a ride and I’ve accomplished more than I could ever have hoped to have dreamed of in my wildest dreams for sure.”

Among his glories, the championships and wins aren’t what mean the most to him. It’s the lasting impression he’s left on fans and those in the industry. Moments he looked at as insignificant took on new life when they became admired plots to someone’s story. Knowing something he did helped create a happy moment in someone’s life was an unexpected trophy each time.

That doesn’t change the way he views his career. It makes him prouder of it.

“Just to hear that I was a small part of their life that they vividly remember as a good moment makes me proud,” Pittman said. “Proud of all of the wins. Proud of all of the years we’ve been able to do it and all of the car owners I’ve been able to drive for. But I think, more than anything, I’m just proud of all of the relationships that I’ve had and been able to have with teams that maybe we didn’t finish on the best note but from a personal standpoint I think we’ve stayed in good graces with all of my old car owners and crew guys. It’s hard to do this for as long as we’ve done it. There are very few that have the long career that me and (10-time Series champion) Donny (Schatz) and few others have had. Just proud of the way we did it.”

In his final weekend as a full-time World of Outlaws driver, Pittman said he hasn’t let that thought get to him. Like any other season, he’s focused on ending it on a high note.

This year has put him on a roller coaster, with the first two-thirds of the year plagued by the COVID-19 pandemic and inconsistencies with the Roth Motorsports team. In September, shortly after announcing he was stepping away from full-time racing, he also announced he would part ways with Roth – who he had driven for since 2019. He picked up an emotional hometown win at Lawton Speedway before splitting with the team and rejoining Heffner Racing for the remainder of the season.

At Heffner, he was paired with crew member Heath Moyle and reunited with crew chief Kale Kahne – who he worked with at Kasey Kahne Racing when he won the championship. His stint with the team has resulted in one top-five and two top-10 finishes in 11 races, so far. They’ve shown speed in each event, making the DIRTVision Fast Pass Dash in about half of them, but part failures and bad luck have hindered their final results.

Despite the poor finishes, Pittman said he’s still having fun. Being paired with Heffner, Moyle and Kahne to finish out his career in Charlotte – a track he has two wins at – is a big contributor to that.

“I couldn’t have asked to finish out the year with a better team and better people, truthfully,” Pittman said. “For as trying and as hard we’ve had to work to keep a competitive car on the racetrack, as much stuff as we’ve gone through, to do it with these guys and the attitudes that they’ve been able to keep and maintain has been refreshing. Brought me back to what it takes to be a part of successful teams with successful crew guys.”

Once he take the checkered flag for the final time as a full-time World of Outlaws driver, during the fittingly named Last Call event, and climbs out of the Shipley Energy #72 car, a new chapter in his life will begin. What that is? He’s still working on it. Maybe some racing. Maybe a lot of racing. Maybe no racing.

He’ll look to find his 13-year-old self again, who found something he loves and turned it into a life’s goal.

“I’ve been able to turn a hobby into a job and it’s the only job I’ve ever had,” Pittman said. “I think for anybody, that’s all you can ever ask for; to find something you love and find a way to make a living doing it and I’ve been blessed to be able to do that for a long time. No doubt moving forward, whatever, we do, it will also be the same way. It’ll have to be something I enjoy, and I look forward to figuring out what that is.”

To see Pittman’s last race as a full-time World of Outlaws driver, you can get a pit pass at the track.