OVER TOO SOON: Mason Daniel Heartbroken with Retirement Announcement 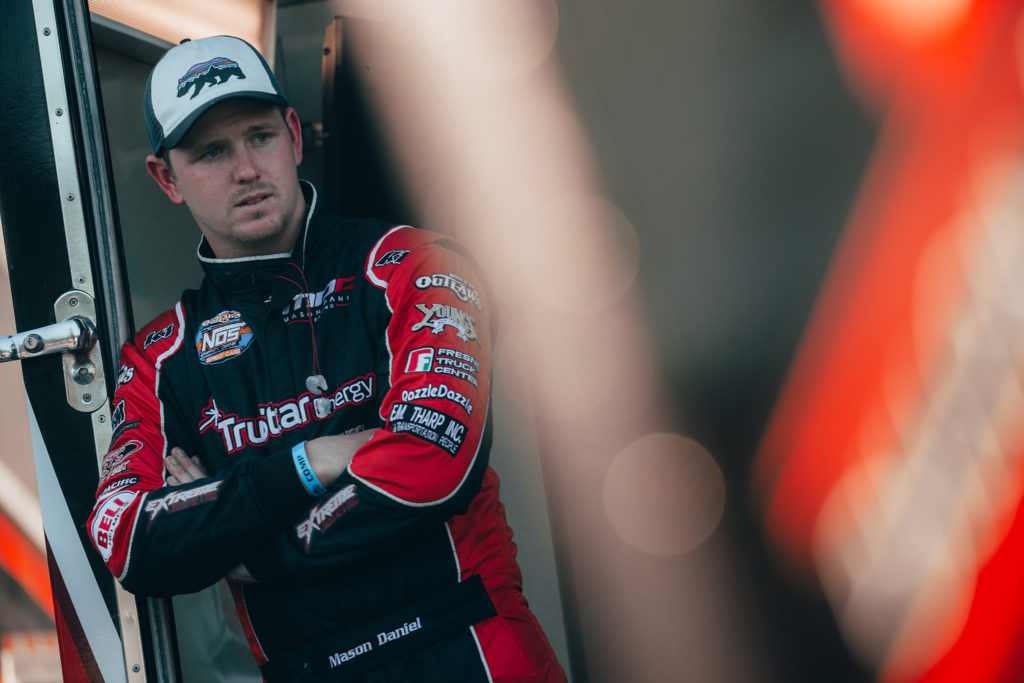 History of Concussions Prematurely End His World of Outlaws Dream

Since he was 16 years old, Mason Daniel had one goal in life – he wanted to be a World of Outlaws NOS Energy Drink Sprint Car Series star.

He achieved half of that goal by becoming a full-time driver for two seasons, but sadly he’ll never get the chance to fulfill the second part.

With a history of concussions and several doctor recommendations, the Springville, CA native has decided to call it a career at 21 years old.

“I saw several doctors and we decided it’s best to shut down my team and step away from racing,” Daniel said. “I want to get back in the car tomorrow, but this is something for my health going forward that I need to do. The toughest decisions are normally the right ones.”

“It’s pretty heartbreaking,” he expressed. “Everyone has a dream, and mine was to be a competitive World of Outlaws driver. I got to do the Outlaw part of it, but I wasn’t at the competitive level that I wanted to reach. It really sucks to be completely honest.”

“I thought I was going to race until I was in my 40’s, so to lose my career at 21 is just a huge blow,” he continued. “I left my family, I left everything in California to go chase this dream. The Outlaws became my family. The hardest thing about this I knowing I didn’t get to accomplish what I wanted to.”

Daniel dropped everything back home and moved to Missouri to pursue a full-time career with “The Dude” as his mentor and crew chief. The duo enjoyed their fair share of success as Daniel went through the learning transition from a 600cc Micro Sprint to a full-blown Sprint Car.

He won a 360 event in his fourth start at the famous Knoxville Raceway, topped an ASCS Warrior Region show at Missouri State Fair Speedway, and won a Sprint Invaders race at Lee County Speedway.

In 2020, they dove into the deep end and went full-time with The Greatest Show on Dirt. The goal was to play the long game and continually learn the tracks and learn from his competitors.

The #33M pilot narrowly lost out on Kevin Gobrecht Rookie of the Year honors and was looking forward to a successful sophomore season in 2021. However, an incident at I-70 Motorsports Park was the final straw with his history of concussions.

“Being sidelined out of nowhere, really puts you at a loss,” Daniel admitted. “I don’t know what I’m going to do now. For the last five-to-six years, my plan has been to race. My plan was the World of Outlaws. I’ve been so goal-driven over this last half-decade, it’s heartbreaking to have that taken from you.

For now, Daniel is taking it one day at a time. He and the MDR crew members are packing everything up at the Carrolton, MO shop and preparing to sell all their equipment, then he’ll head home to his family in California.

“I’m still honored that I was able to do the tour for two years and meet all the people I met,” Daniel added. “I created a family out there on the road. I appreciate all the connections I made more than anything.”

He added that although he won’t be behind the wheel, Daniel fully plans to attend the west coast swing this fall and visit all his old running mates.

The World of Outlaws NOS Energy Drink Sprint Car Series wishes Mason and his family nothing but the best in their next chapter. It was a pleasure to welcome him and his family on tour for two years.

WHAT TO WATCH FOR: World of Outlaws Start Missouri Trip at US-36 & Lake Ozark